My point is:  Matt Hannon is too much of a surfer-like pretty boy for me to take seriously as a shoot-and-ask-questions-later badass cop.  Then, adding insult to injury, I’m supposed to buy him as a katana-wielding samurai?  At that point I kindly request my suspension of disbelief to go fuck itself.

Hair or wig? Regardless, they're both FAAAAABULOOOOUS!

Anyway, the Samurai Cop is asked to take a hiatus from his regular job at Smoothie King to help local law enforcement bring down the evil Yakuza that’s taken a stranglehold on the city.  Nobody understands the Samurai Cop’s methods – mostly because he’s a jackass – but damnit, he gets results.  Frank Washington is his wisecrackin’ partner, and one of the many racial stereotypes that run rampant throughout the film.  His job is to occasionally take down bad guys, but mostly just mug at the Samurai Cop’s antics and provide “comedy relief’ – though, for the life of me, I can’t recall laughing once.  At least not at anything intentional.    In case you’re wondering, there is, in fact, the perpetually grouchy police chief who likes to chew ass and loosen his tie in exasperation.  I can’t blame the flick for that.  The angry police chief is federally mandated to appear in buddy-cop flicks.

Humping in your undies? YOU'RE FUCKING DOING IT WRONG!

SAMURAI COP falls out of the Retard Tree, hits every branch, and proceeds to beat itself along the neck and upper torso with the broken limbs.  The dialogue is awful, the acting awfuller, and my grammar awfullest.  Wish I could say the fight choreography rocked – yeah, I wish I could say that.  But when Robert Z’Dar and a living, breathing Ken doll are your two martial arts experts – my friends, you are fucked.  I don’t care how fast you speed up the fight scenes.  Two sped-up fucknuts shitting their pants are still just two fucknuts shitting their pants – just really fast.

I like a lot of movies – usually, for all the wrong reasons – but there are only a select few that make the Creeper’s vaunted “Must-Fucking-See List.”  SAMURAI COP, my friends, is a Must-Fucking-See. 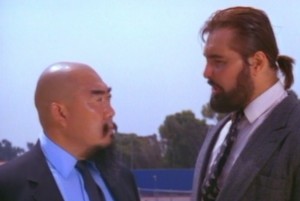 Not since De Niro and Pacino in HEAT has the screen been ON FIRE with such starpower!