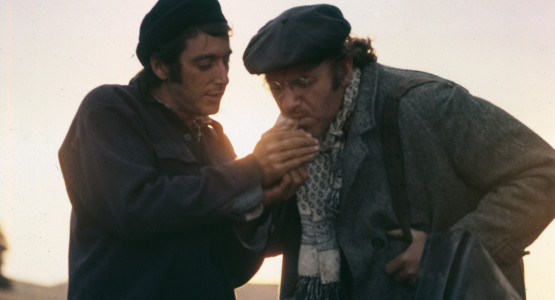 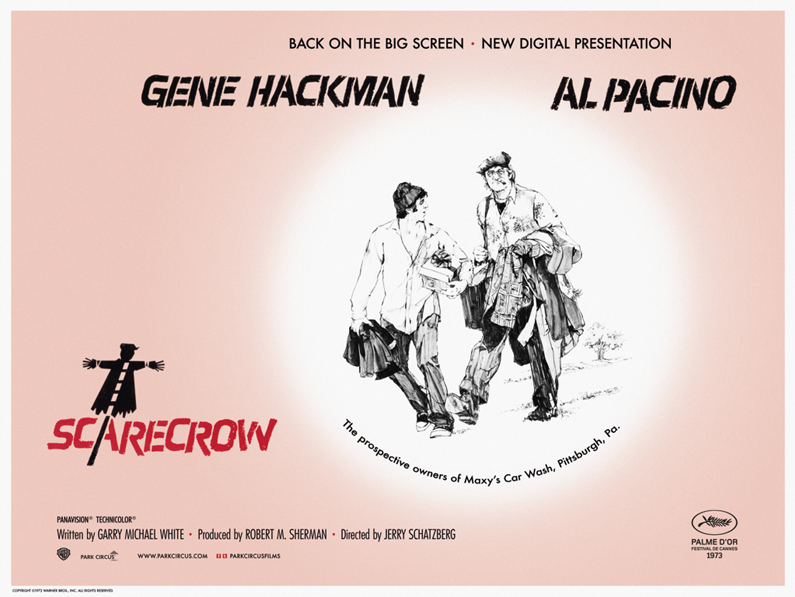 SCARECROW is a road–trip buddy movie starring Gene Hackman and Al Pacino , a study in contrasts: Hackman, burly and taciturn, and Pacino, lively and talkative. The two of them had only recently become huge stars in America — Hackman with THE FRENCH CONNECTION and Pacino with THE GODFATHER. In the next year, they would make THE CONVERSATION and THE GODFATHER: PART II, respectively. Any of the aforementioned films are far better known today than SCARECROW is, and all of them are phenomenal films of course, but none of them have the delicacy and the intimacy SCARECROW does.  It’s a rare movie that even aspires to those qualities. SCARECROW is a rare movie.

SCARECROW is funny, affecting, and sad. And it’s incomparably visually beautiful also: The cinematography is by Vilmos Zsigmond (McCABE & MRS. MILLER, ‘nuff said). Hackman hasn’t been seen on screen in years, and Pacino’s most recent movies haven’t been a patch on his classics — I liked MANGLEHORN if you’re looking for something new-ish and comparable — but if you love these two great actors and you want to see them onscreen together (and who the hell doesn’t want that?), SCARECROW is essential.