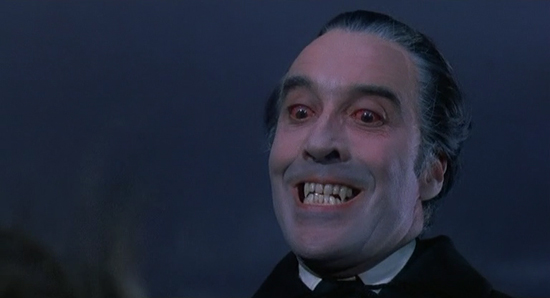 Starting in 1958 and continuing throughout the ’60s, England’s Hammer Studios–partnered with Warner Bros. in America — crafted a series of Gothic horror movies starring the old guard of monster royalty who had previously been the star characters of Universal’s scarepics in the ’30s and ’40s. Dracula and Frankenstein’s Monster took turns popping up in these pictures, with the Wolfman and the Mummy dropping by periodically as well. These newer movies usually starred Peter Cushing or Christopher Lee (often both men), they were in color, and they showed a little blood and the occasional heaving bosom, making them seem positively lascivious compared to the chaste charms of Karloff ‘s and Lugosi’s movies decades previous. Hammer never resorted to the “monster rally” pictures either — each of their movies revolved around a single monster.

As 1970 rolled around, Warner Bros., finding their profits shrinking, pulled out of the deal, leaving Hammer to make any further sequels on their own. Sticking to strictly British financing, they rolled cameras on HORROR OF FRANKENSTEIN, and then immediately after on SCARS OF DRACULA, saving money by using many of the same actors and even some of the same sets. Now, Scream Factory has given SCARS OF DRACULA its HD debut on Blu-ray. 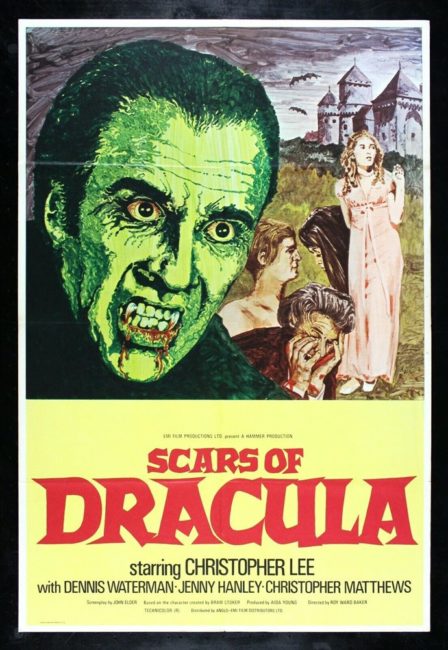 As with all Hammer movies, this has a somewhat stately pace compared to modern movies, but this fifth Hammer Dracula movie gets right off to some kind of a start with the Count (Lee) looking downright powdery as he lays dead in his castle from his demise in the previous movie. The last couple of sequels took a bit of time to get Drac up and at ’em, but it’s the ’70s, so immediately after seeing the remains of the vampire king lying dustily among his clothes, a large bat pops by and pukes blood (!) on the remains. Within seconds — and cleverly utilizing reversed footage of his death scene from the last flick — Dracula is feeling much better and gets right back to the business at hand, namely biting beautiful women on the neck. Over the credits, a distraught father carries the bitten body of his daughter to town, revealing it as the usual quaint 1800’s European village. The townspeople hate and fear the Count, but they cannot stand idly by as he drains all of the young female residents. So an angry mob storms Dracula’s castle. They encounter Dracula’s manservant Klove (Patrick Troughton of classic Doctor Who fame) but he’s no match for their anger and torches, and soon the castle is ablaze.

Arriving back home, the mob heads right to the church where they had all of the village women go for safety. But no, when the doors are opened, that same damned bat (and several more, but all represented by the same big puppet on wires) flies out. Sure, Dracula may be homeless now, but all of the villagers are widowers.

Then the real plot kicks in as virile young brothers Paul (Christopher Matthews) and Simon (Dennis Waterman) fight over local girl Sarah (Jenny Hanley) and take turns stumbling in to what’s left of Dracula’s castle, where the urbane Count welcomes them — and where the Count’s young female protégés are hoping the boys will stay around — for dinner, if you take my meaning… and I’ll bet you do. And the romantic triangle gets downright rectangular as Dracula also starts making a play for Sarah since he feels she’s just his type. You know, as in O Positive? 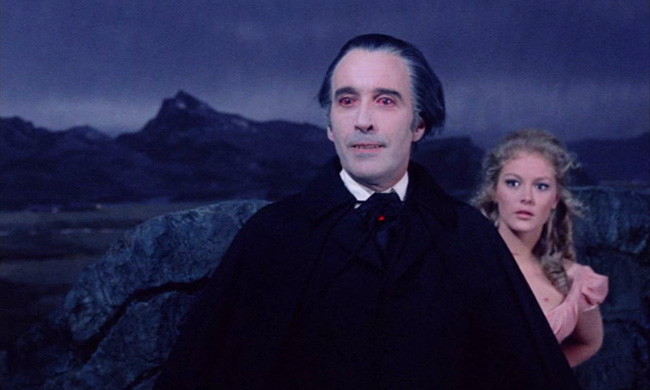 For this sequel Hammer brought in usual suspect Anthony Hinds to write the screenplay (as John Elder). Hinds had written over a dozen Hammer horrors by this time, so he definitely knew what the films were about. However, director Roy Ward Baker was a relative newcomer to the Gothic horrors, having directed a lot for Hammer but usually thrillers and action movies. He plunged in happily though and followed producer Aida Young’s (and Hammer’s) mandate to up the ante on the sex and violence as a new decade was dawning. The ’50s Hammer movies were considered outrageous in that decade, but were starting to already feel a little tame a dozen years on. So, while SCARS OF DRACULA is not wall-to-wall nudity and buckets of blood, there is a marked up tick in what is shown onscreen here; of course nearly fifty years on, even this seems tame.

Not all Hammer fans agree, but for me this movie works. It’s not a four star classic, but thanks to more screen time and dialogue for Lee, you have a solid period Dracula movie with great supporting actors like Michael Ripper (a Hammer mainstay), Michael Gwynn, and other British actors not named Michael. The biggest downsides are the lack of Peter Cushing and the reduced budget, but the talented Hammer crew makes the most out of what they had to work with. Of course, on Blu-ray their efforts are undermined by the higher resolution, so high there’s no missing the wires, miniatures, and matte paintings. But that’s what technology has wrought on the effects of old. 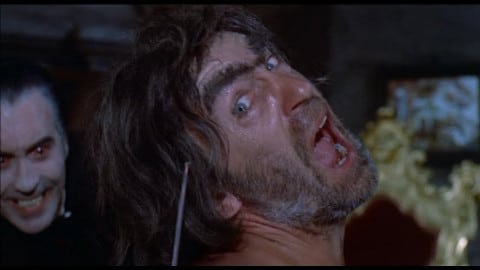 I don’t think there can be any argument that Scream Factory has put together a terrific presentation of SCARS OF DRACULA. With a crisp 1080p transfer from the film elements, the 1:85:1 picture is blemish-free and has a pleasing level of film grain. The colors are crisp, and the black levels are solid. The audio is well mixed with the blending of dialogue, sound effects, and music evenly balanced. They have also fully loaded the disc with special features, starting with a second version of the movie in the 1:66:1 aspect ratio. I watched the 1:85:1 in full, as it filled my widescreen TV perfectly, and I dipped in to the 1:66:1 — which shows so little difference, it’s initially hard to tell the different ratios apart (the latter is very slightly windowboxed on the sides with a tiny amount of added picture at top and bottom — on my 43 inch set, this amounted to about a half inch of black bar on the left and right and a quarter inch more picture at the top and bottom). This might not be enough of a difference to rate with most viewers, but if they can add it without sacrificing the picture quality of either, why not?

On the audio side you get a commentary ported over from a 2000 release with star Christopher Lee and director Roy Ward Baker (both now gone, sadly), moderated by Hammer expert Marcus Hearn. This is a marvelous listen. Lee, notoriously a little prickly about the quality of the Hammer scripts he was given, seems surprised at how well the film works and offers lots of interesting details along the running time. Baker doesn’t speak as much but also offers some choice information. The knowledgeable Hearn keeps the chat moving. You also get a new commentary from film historian Constantine Nasr with a brief section from music expert Randall Larson. I enjoyed the information Nasr brought forth from his research, but despite him saying in the opening minutes that he isn’t going to bash the movie, he spends the next ninety minutes bashing it pretty good. He doesn’t think the movie works, and that lends a strange feeling to the commentary. I did enjoy listening to him, but I might have enjoyed more a commentary from someone who actually likes the movie. Weirdly, the label on the case lists film historian Ted Newsom as also being a part of this commentary, but he is not (?), except for a thank you from Nasr in the closing moments. 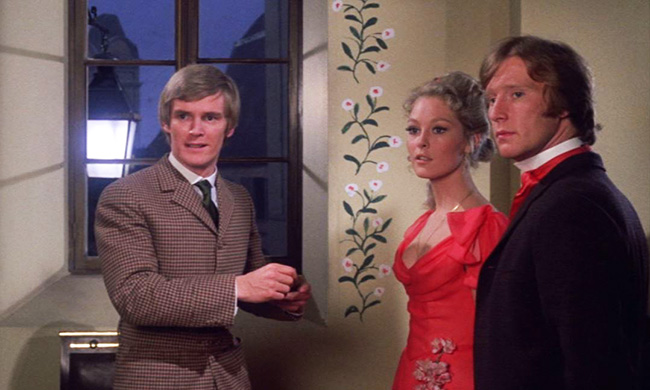 Also included in the special features is the eighteen-minute featurette Blood Rites: Inside Scars of Dracula, with several British Hammer experts and actress Jenny Hanley talking about the movie. It is worth watching, especially with one of the original actresses involved. Rounding out the features are a pair of trailers and a still gallery.

All in all this is a fun old-fashioned vampire movie with the added bonus of a naked tush and a bit more blood than had previously been seen. It’s wrapped up in a fine Blu-ray with plenty of added value from the special features, so I give SCARS OF DRACULA a hearty recommendation that goes double for Hammer fans. 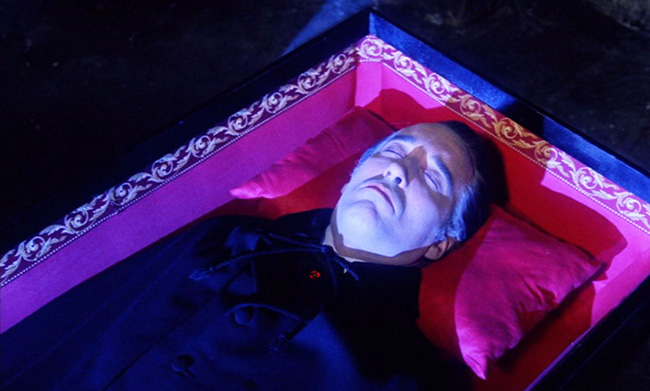