Home  ⁄  The Wire  ⁄  [IN THEATERS NOW] ‘IT CHAPTER TWO’ is an entertaining, but flawed, return to Derry

The Andy Muschietti-led adaptation of Stephen King’s It, first released in 2017 and now concluded with IT CHAPTER TWO, is a very high profile project that already achieved much—even before the final entry hits theaters. 2017’s IT is the highest grossing horror movie of all time. Combined with Stranger Things, Muschietti’s film kicked off a re-assessment and renewed fervor for the works of King, which led to more adaptations of his work being added to the Hollywood pipeline. But the films are also unique in a less-expected (or even discussed way): in an age where entertainment conglomerates lay out their plans for the next five to ten years of releases, IT seems like it wasn’t truly planned out. LORD OF THE RINGS, Marvel, DC Expanded Universe, Universal’s Dark Universe—these corporate-driven universes have attempted the longview work of creating multiple titles with sequels and other entries to expand on a world and tell some version of a unified story. While it is refreshing to not have a movie delivered to theaters with spin-offs, sequels, tie-ins, and needless expansions already mapped out on the board regardless of artistic vision or audience response—especially for a film that’s proven as lucrative and artistically successful (with audiences and critics heaping praise on it) as this—it would have been nice if some more forethought had been given to constructing the story as a whole.

Though adapted from the 1986 horror phenomenon, IT (2017) was based on two versions of the script—one by Chase Palmer and Cary Joji Fukunaga (back when Fukunaga was going to direct) and another by Gary Dauberman (written when Andy Muschietti was brought on board to helm the film). Someone better versed in this production than I, or at least with better connections to obtaining shooting scripts and drafts, could speak to what was kept from that original screenplay. It could have just been structural elements (updating to 1989, or what incidents occur and when, etc) or maybe a line or two of dialogue, or some character profiles (as there are many deviations from the literature). But in any case, for IT CHAPTER TWO, Dauberman is the only credited screenwriter; which partly speaks to the biggest issue facing this movie. There are elements in CHAPTER TWO that exist only because they were in the book, and seem disconnected from the altered story told in the previous installment. There are character traits and themes present that weren’t addressed or even subtext in 2017’s film. IT CHAPTER TWO isn’t bad—it’s not as good as the first part—but its main issues stem from a lack of cohesive storytelling. It sounds pretentious and lofty to talk about themes in movies, especially those with sewer-dwelling killer clowns that are ancient aliens; but if there had been a bigger picture approach to this adaptation, it would have solved a lot of narrative problems and avoided a sense of disconnect that mars the films taken as a whole. 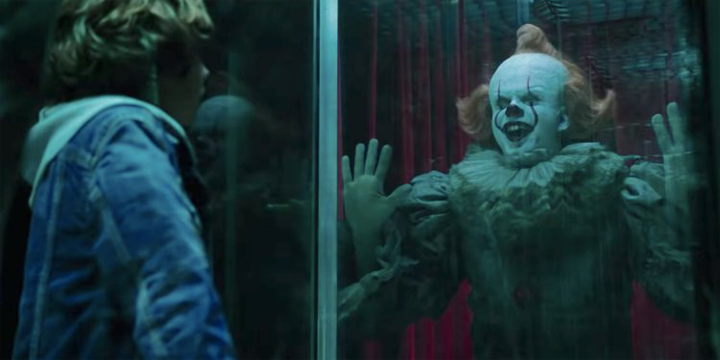 IT CHAPTER TWO takes place in present day Derry. 27 years after the Losers Club defeated Pennywise (Bill Skarsgård), the devourer of worlds and children that infected the area has returned to the sleepy Maine town. Mike Hanlon (Isaiah Mustafa), the only member of the Club to remain in their hometown, starts making the calls for the other Losers to abide by their promise and come back and fight the monster. All the other members have moved on to career success, if a bit haunted by obscure childhood memories they can’t quite recall. Bill (James McAvoy) is a writer, attempting to adapt one of his own books into a movie—even when everyone keeps telling him how bad he is at endings (hope you like that in-joke about King/wink about concluding an epic tale, because they make it A LOT in this film). Bev (Jessica Chastain) is a fashion magnate, Ben (Jay Ryan) a somewhat secluded but renowned architect, Eddie (James Ransone) is a risk assessment analyst, Richie (Bill Hader) is a comedian on the rise, and Stan (Andy Bean) is living a simple but happy life in a strong marriage with plans to vacation in Buenos Aires. Those that heed the call to action arrive in a hometown they barely remember as a fog has been laid over their brains since that summer all those years ago. As they struggle to recall, Mike is urging them all to help fight this monster one more time, one last time, or the cycle of fear and death will never end for any of them

IT CHAPTER TWO is a fine movie—there’s still great grotesque and inventive imagery, funny jokes, strong acting, a real sense of a truly dangerous antagonist, and charming chemistry among the cast. Hader is the go-to for comedy, but Ransone is a perfect foil for him and the two form an excellent buddy dynamic that feels very lived in. Mustafa is a bit unhinged, waiting for this day to come again for so many years, but his palpable relief at being surrounded by the only people that accepted him is heartwarming. Chastain is rock-solid, as the tie that binds the group (more than Bill, in this interpretation), while seeming confronted again and again with this shadow she can’t outrun (also, I swear she’s wearing the same pants from MAMA). There’s plenty of fun jump scares (though still with the annoying orchestral sting that isn’t needed), some gruesome f/x work and creepy performances by Javier Botet in monster regalia. And Skarsgård proves there’s a reason his Pennywise is already iconic and permeating the horror merchandising and branding landscape—ferocious, creepy, calculating, unhinged, darkly funny but all with plenty of incidents that make him seem like a true threat.

But the film is very clunky and doesn’t add up based on changes made to the source material in the first entry. For example—why is Mike in Derry? In Chapter One, he was already an outsider—a home schooled farmboy that people blamed for the deaths of his parents. Not the history-obsessed kid who studied the town history (that was Ben in the movie). Why, then, would Mike be a librarian for Derry and still live there in IT CHAPTER TWO? Why is Ben an architect? There is literally no hint to this in the first film, but because he was in the book, he is a world-class figure in the field (that bizarrely looks exactly like architect phenom Bjarke Ingels), and there are fill-in scenes that retcon this love of building. Remember how Beverly (Sophia Lillis) had multiple cathartic moments of beating her dad (and Pennywise in her dad’s form) before leaving to live with her aunt at the end of the 2017 film? That intriguing change in the character’s development is washed aside in order to reset back to the abusive marriage from the book (but only for a scene). 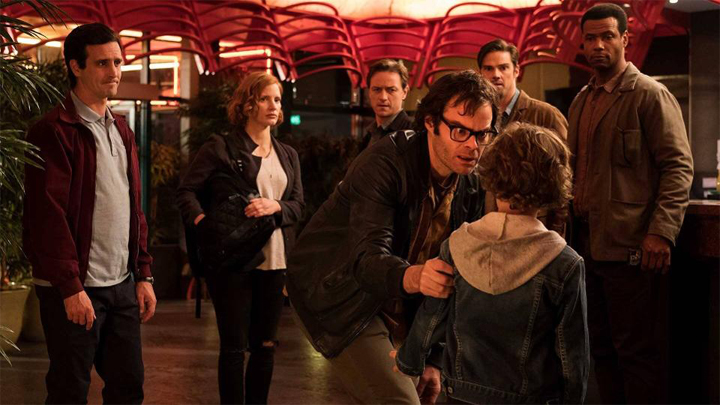 It’s a weird chimera of devotion to the source material—doing things just because that’s how it is in the book—and also dropping stuff from the novel completely. Bill still has Silver, his beloved bike that outran the devil twice—but amounted to nothing in IT (2017) and barely factors in to this new chapter; blink and you’ll miss that he has a wife now as that fact (and plotline) only exists for one exchange. IT CHAPTER TWO does a good job of using the foggy memory device to account for new scenes from the fateful summer of ’89, and reveal events and developments that weren’t included the first time around (albeit with occasional de-aging CGI that is pretty creepy to see on a teenager). But this retconning or odd devotion to the book deprives the film a real sense of continuous character momentum and thematic cohesion—Palmer, Fukunaga, Dauberman, and Muschietti made changes (some good, some bad) in IT (2017), but they should have born those ideas and changes out in IT CHAPTER TWO. Because of the multiple character POVs, with each of the Losers on their own journeys for a lot of the movie, the audience feels every one of those 169 minutes.

But luckily those elements are usually overshadowed by terrific performances, a very strong sense of humor, cool monster moments (though one ridiculously overt reference was far too-on-the-nose for my liking), and some surprisingly moving scenes about not being able to run away from yourself. It’s a fun and entertaining film that, sequence by sequence, works and has a lot of clever bits (certain casting calls, creepy use of characters in deep background, looming imagery all around) and honest-to-good heart and sentimentality that work as you’re viewing it. But away from the screen, it’s the slow unraveling and unpacking as your brain tries to square up IT with IT CHAPTER TWO where it’s clear the project needed more oversight. It’s a weird lament in this day of pre-planning out whole franchises and narrative maps dictated by corporations; but with some key person at the helm of this adaptation (a Fangoria-subcriber Kevin Feige type), taking it as one piece and not two disparate projects, it could have been a film pairing for the ages. As it stands, it’s one very good horror film and another that is also pretty good, but torn between incredible qualities and awkward flaws. 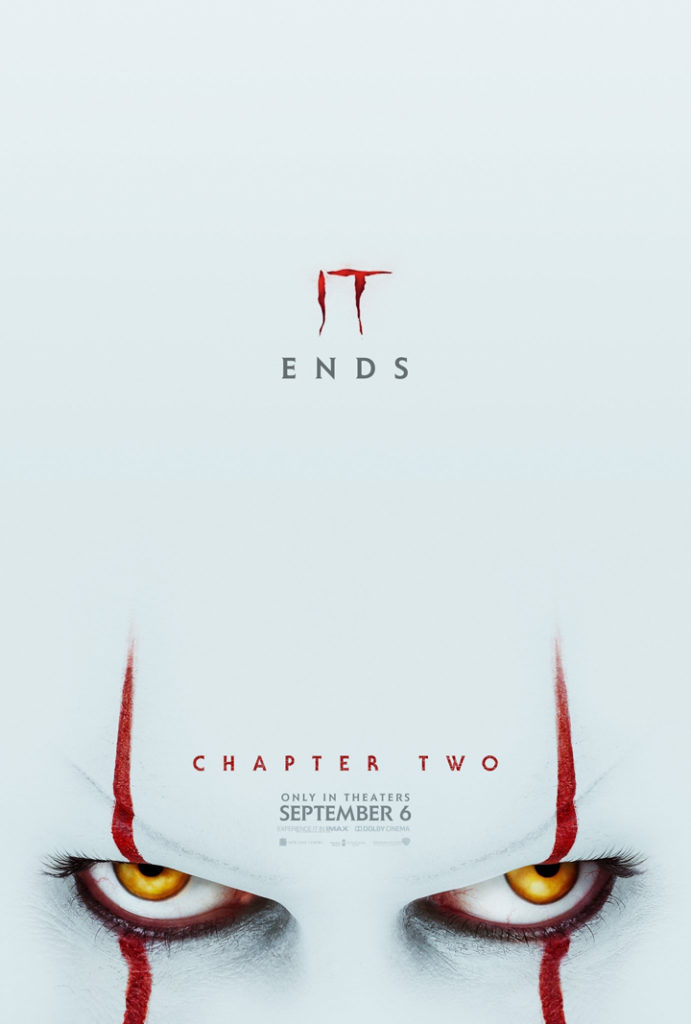