THE LAWNMOWER MAN is coming to Blu-ray this summer and Scream Factory has given DAILY GRINDHOUSE an exclusive look at the special features included on the disc. Here, director Brett Leonard, star Jeff Fahey, and editor Alan Baumgarten discuss the virtual reality special effects that play an integral part in the film.

In the history of loose Stephen King adaptations, THE LAWNMOWER MAN is arguably the loosest, taking only the title and a character that mows lawns.King’s 1975 short story, first published in Cavalier and again in 1978’s Night Shift, featured a naked satyr who eats grass and sacrifices his landscaping client to Pan. The original script from which THE LAWNMOWER MAN is based—titled Cyber God— found Leonard and producer Gimel Everett exploring a sci-fi take on Frankenstein  blended with elements of Flowers For Algernon, as well as the King tropes of alchoholic fathers and abusive adults. New Line Cinema held the rights to King’s short story and combined the barest of elements with the Leonard’s script in order to market the movie. King successfully sued to have his name removed from all marketing for the film, alas New Line defiantly released Stephen King’s The Lawnmower Man in the spring of 1992, debuting at #2 behind WAYNE’S WORLD. A third judgment imposed a penalty of $10,000 payable to King finally forced New Line to relent and remove the author’s name from all marketing materials. 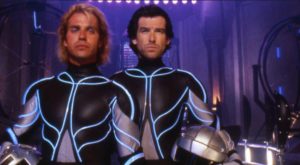 The new release from Scream Factory includes 4k restorations of the theatrical cut and the unrated director’s cut, as well as audio commentary with Leonard and Gimel, and a brand new documentary on the making of the film.

THE LAWNMOWER MAN is now available from Scream Factory.