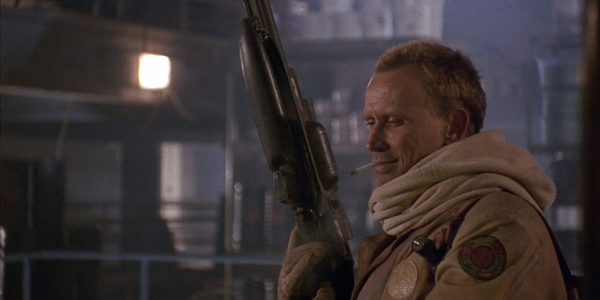 For me, there is a comfort food feel to watching low to moderately budgeted indie genre movies from the mid-’90s. Sure, many of them do not hold up these twenty odd years later, but they invariably take me back to a time when I would stay up all night, watching everything I found in the horror and sci-fi sections of stores like Video City or Hastings. Thankfully, 1995’s SCREAMERS, one of my favorites of that era of video store delinquency, has held up well and has been rewarded with a pretty decent Blu-ray presentation. 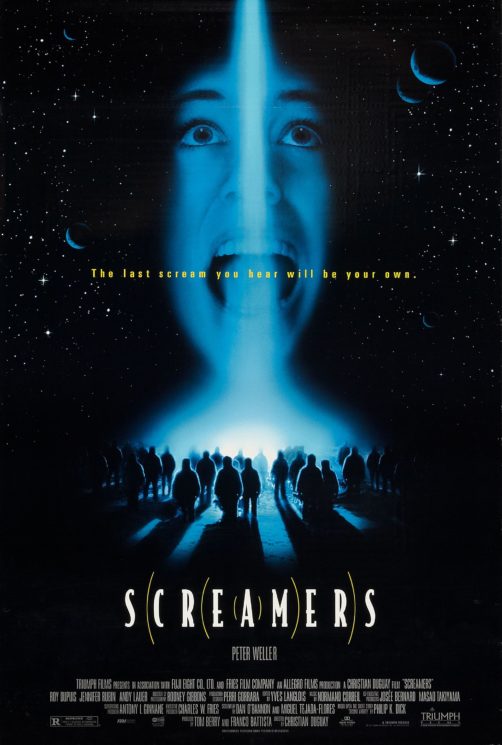 For anyone foolish enough to not jump at the chance to watch a futuristic sci-fi flick co-written by Dan O’Bannon and starring Peter Weller when it briefly played theaters before becoming a video store mainstay, I’ll do a quick plot set up. But if you haven’t seen the film, I do have to ask, what kind of soulless video store kid were you?

SCREAMERS opens with approximately forty minutes of narration that explains the discovery of a super fuel on a distant planet and how that led to a war that has dragged on for over ten years while political factions vie for supremacy back on Earth. After getting through the convoluted political back-story of the conflict, the rest of the flick is a relatively straightforward “men on a mission” story with a dash of paranoid spy thriller thrown in by way of the film’s sci-fi trappings. 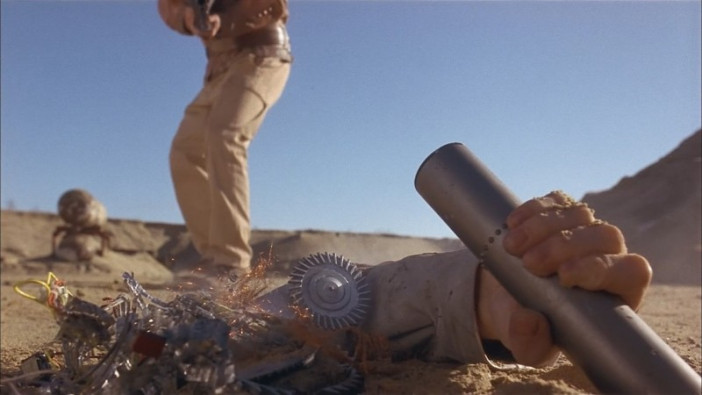 Joe Hendrickson (Weller) is the commander of an outpost on the distant planet who is fast approaching burnout—along with the troops he leads. When a soldier from the opposing side sacrifices his life to the titular mechanical villains (more on those later) to deliver a message from his commander asking for sudden peace negotiations, Hendrickson heads out on an impromptu journey across the barren wasteland of the planet. The dangers not only come from the screamers, but also potentially from two twitchy enemy soldiers (Roy Dupuis, Charles Powell) who are the only survivors on their side of the conflict and Hanson (Jennifer Rubin), a black market weapons dealer desperate to get back to Earth. As the group tries to figure out if they can trust each other, they have to deal with the screamers that have developed artificial intelligence and are now capable of impersonating humans. 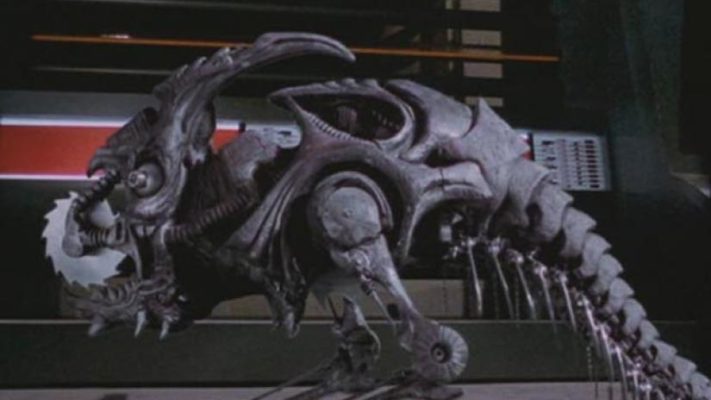 The main attraction to SCREAMERS is the vicious metal killing machines. Director Christian Duguay and writers O’Bannon and Miguel Tejada-Flores (working from the Philip K. Dick short story “Second Variety“) do a nice job of introducing the screamers as small robots that come up from underground to slice and dice their victims before showing how they evolve to become deadlier and more cruel by taking on the appearance of people. It’s a hell of an idea and Duguay pulls off the difficult task of making such a pulpy, far-fetched premise deadly serious in tone by grounding the film in Weller’s terrific, world-weary performance. 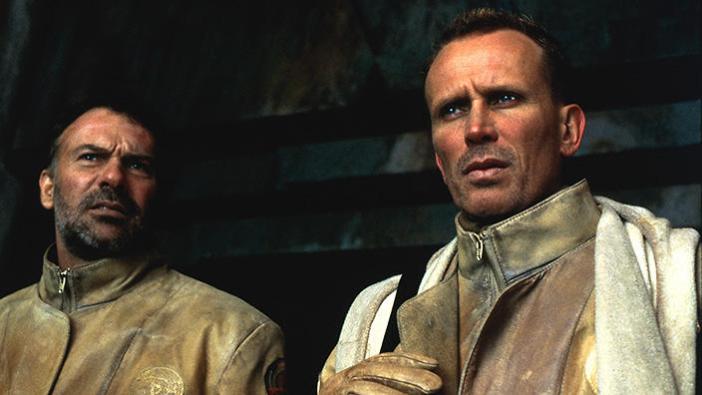 Not only do the filmmakers take full advantage of Weller’s talents, they also create a grungy world that looks and feels futuristic with its technology and costuming without ever going over the top. The sets and locations really do look like this is a far-away planet that has been decimated by a long war. If Duguay and his production/art design team were unable to sell this aspect of the film, the whole thing would have devolved into silly cheese. 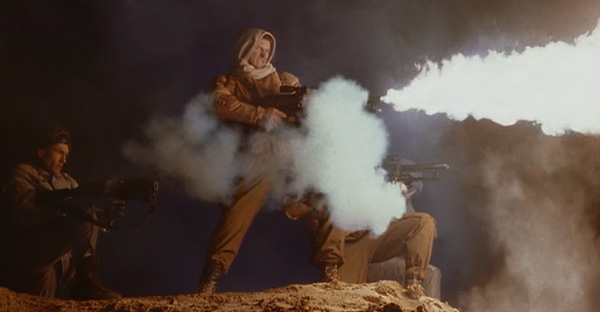 The film gets good mileage out of genre favorite Rubin and Ron White as Hendrickson’s second-in-command, but this is Weller’s show all the way as he injects gravitas, charm, and a bruised humanity into a story that could have been cold and bleak (it is mentioned many times in the bonus features that he took an active hand in on-set rewrites and it shows in his well-rounded character). In a world where almost all humanity has been lost, Weller gives Hendrickson a borderline obsession with doing all he can to save the few people around him that simultaneously makes him a flawed leader, but also the real beating heart of hope in a film that desperately needs it. This may be Weller’s best performance. 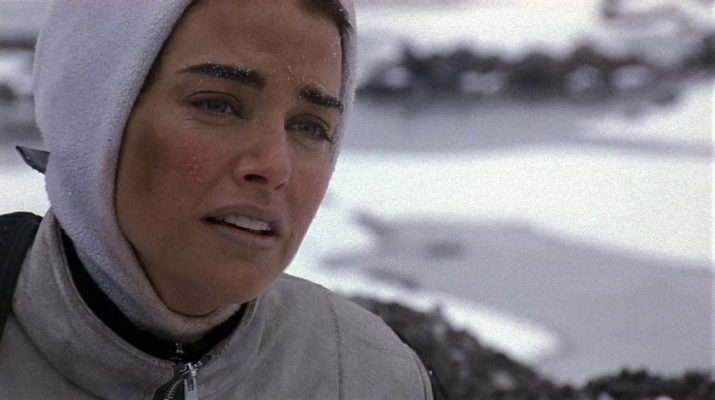 This Scream Factory Blu-ray features a pretty good transfer that highlights some impressive cinematography by Rodney Gibbons. The film thankfully only features a little of the rough mid-’90s CGI and largely relies on matte paintings, mechanical effects, and stop motion to bring the planet and the screamers to life. If for no other reason than to provide these wonderful handcrafted effects the best presentation they have had since the film was in theaters, this Blu-ray is worth having. 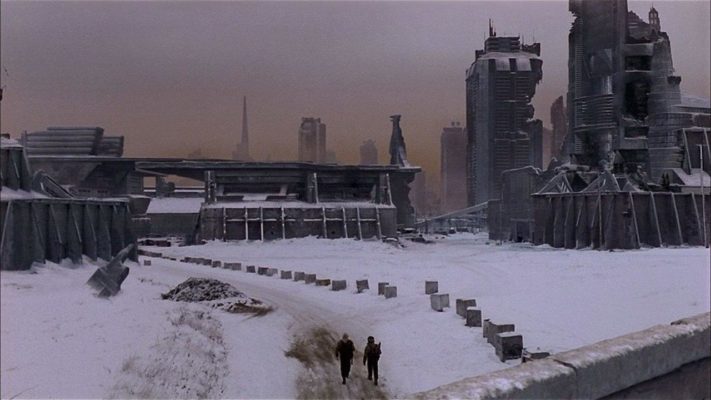 While there is no commentary, there are several good interviews included with Duguay, producer Tom Berry, Tejada-Flores, and Rubin. The stories they tell all overlap in places, but each of them are at least interesting and do not feel like filler included just to pad out the disc’s bonus features. Rubin, in particular, is a delight as she comes off as goofy and charming.

It’s nice to see a film like SCREAMERS get a decent Blu-ray release. Not only does it hold up to my fond video store memories of it, it actually surpasses them.

The SCREAMERS Blu-ray is now available from Scream Factory.