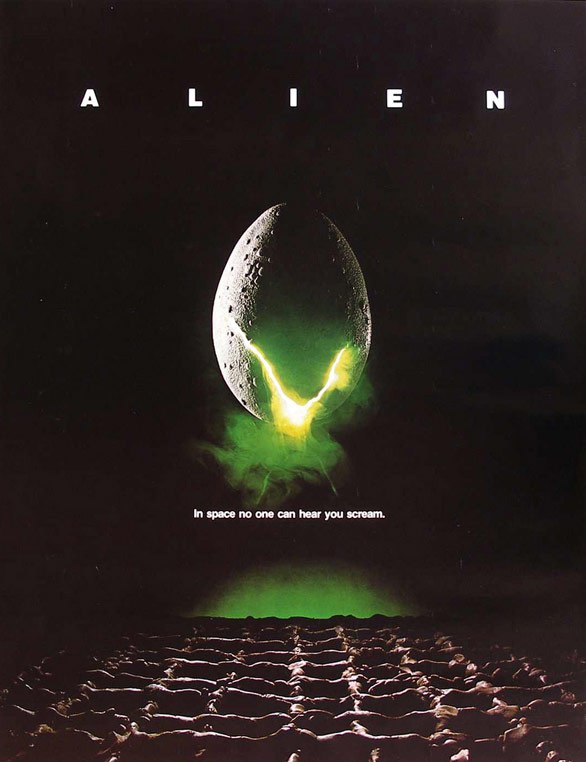 Here’s one thing we should probably mention about ALIEN at the top, since practically nobody ever does — It was Dan O’Bannon’s idea. Yeah, sure, absolutely, Ridley this and Sigourney that, but none of it comes to pass without Dan O’Bannon. Nor without Ronald Shusett, his collaborator on the original script. Dan O’Bannon, who authored or co-authored or worked on some of the more influential films of the last couple decades in horror and science-fiction. He has credits on the John-Carpenter-directed DARK STAR, the Paul-Verhoeven-directed TOTAL RECALL, the Tobe-Hooper-directed INVADERS FROM MARS, the John-Badham-directed BLUE THUNDER, and his own RETURN OF THE LIVING DEAD. RETURN OF THE LIVING DEAD is a deeply important flick when it comes to the zombie genre, because it is probably the source of the zombies-eat-brains guideline, because it’s one of the first scary movies to be more of a comedy than anything else, and because of its insane, gloriously gonzo ending. 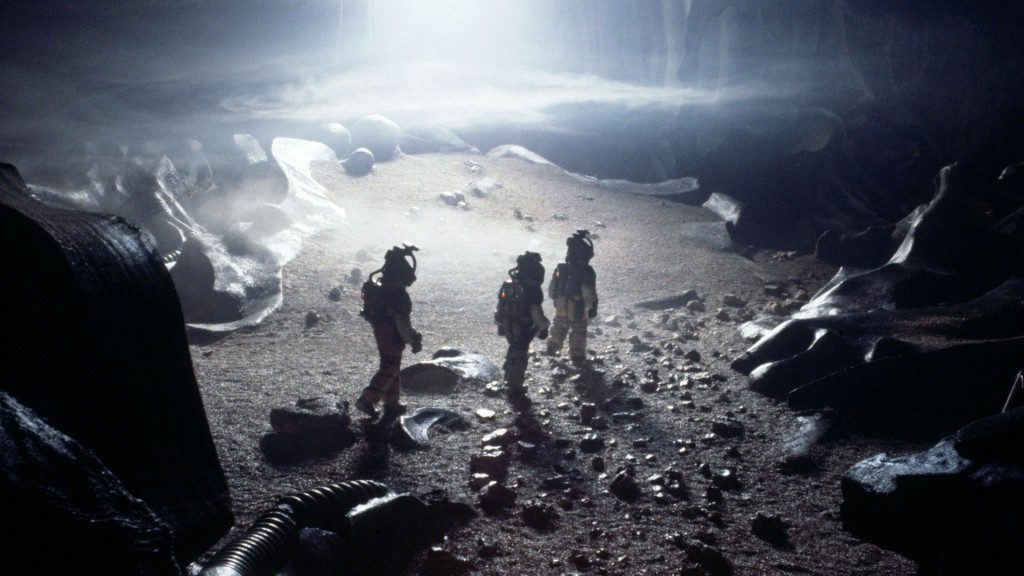 But more than the fun stuff he did with zombies, Dan O’Bannon’s great contribution to the horror cannon was his idea to make a scary version of DARK STAR, itself a space comedy owing more to 2001. O’Bannon had the idea to strand a band of hapless space-farers in the middle of the deep dark of the galaxy with an alien that wants them dead. It’s hardly without precedent in American film to have evil aliens pursuing people — on the contrary, it’s one of the most American things there is — and the idea of an alien preying on humans in isolation dates back at least to the original version of THE THING. But that alien was a plant. This alien is something else. This alien is internal.

ALIEN is science-fiction before it’s anything else (the future setting, the spaceships, the aliens = sci-fi hallmarks), but it plays like straight-up horror.  It’s a haunted-house movie, a ghost story, but it’s one where the supernatural being who is stalking a trapped bunch of people also happens to be an alien.  And it’s an alien of a kind no one’s ever seen in movies before or since. 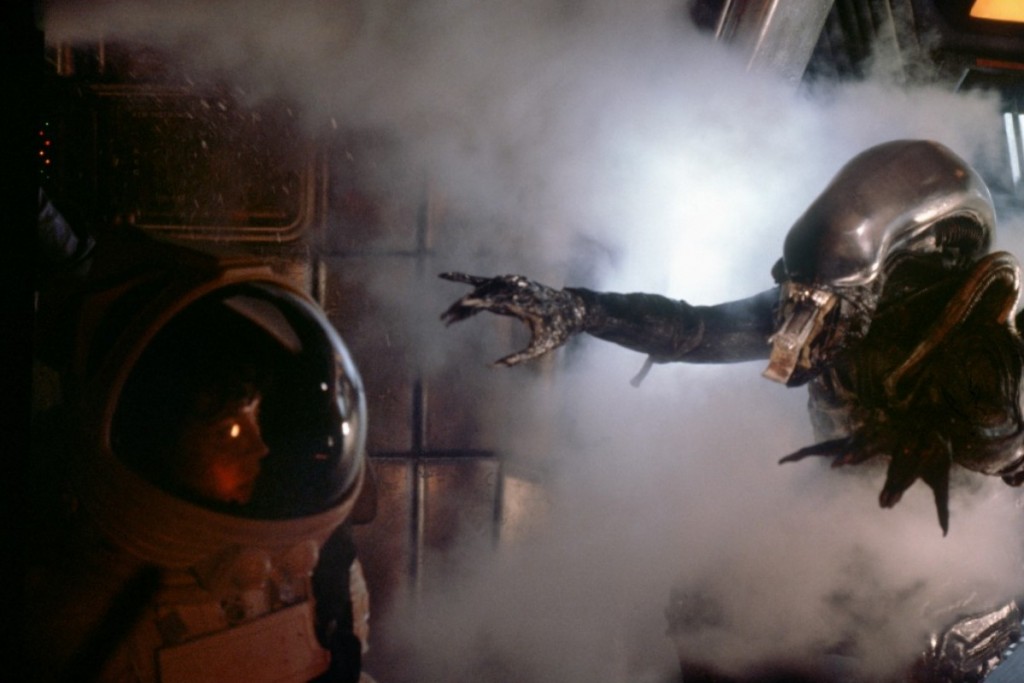 The Alien, as designed by H.R. Giger, is one of the iconic movie monsters, one of the few monster icons from the second half of the twentieth century. It’s almost obscene in its design, more penile in appearance than Joe Camel and more intrusive than any of the knife-wielding slashers of the era. Its head looks like a big dick and inside its mouth is another dick. If it’s not stabbing at its victims with either of those heads, or with its freaky claw hands, then it’s coming at you from your insides, which it does in ALIEN in one of the great shocks in movie history. (ALIEN technically has more than just that one big shock scene — think of what happens to Tom Skerritt, or to poor Harry Dean Stanton — this movie is a scary-ass motherfucker.) We’re now in our third decade of filtering that scene through lenses of endless parodies, homages, and dissertations, but just try to imagine being an unsuspecting audience member back in the late spring of 1979 and experiencing for the first time what happens to John Hurt. Critics and big-brainy film-major types talk a lot about Hitchcock and Truffaut and their conversations about suspense over shock, generally giving the considered edge to suspense — but there’s a lot to be said for the power of shock also, and ALIEN is the proof.

And this brings us to the unusual gender balance ALIEN presents. With all the phallic imagery inherent in the construction of the alien, there is also the matter of the face-hugger, the parasitic creature that deploys the alien seed. That’s plenty vaginal. This I think is one reason ALIEN continually fascinates — released during the heights of the slasher-killer era, a genre that I would argue is eminently male and heterosexual and obsessed with penetration, ALIEN is nearly unique in its equal consideration of the role of women. Certainly the most formidable, graceful, and forceful actress ever to be asked to slip down to her panties for a scary movie, Sigourney Weaver is the ultimate “last girl” – like Jamie Lee Curtis in HALLOWEEN, she plays a character of depth and resourcefulness that was and still is rare for genre films.  She’s a true survivor.  Well, her and the cat.  Good old Jonesy…

For Freeman Williams’ take on Ellen Ripley, click on the picture!

ALIEN brought a gloss to horror and a new prestige to sci-fi, and it’s the movie that truly launched director Ridley Scott’s career. He’s worked in just about every genre, and is one of the few directors who seems to be able to make just about any movie he wants to, but ALIEN still has a strong hold on Sir Ridley, as evidenced by his return to the well with 2012’s PROMETHEUS and even moreso by his current plans to make a PROMETHEUS 2, which I’m pretty sure nobody besides him wants to see. (I’ll see it, of course.)

ALIEN has one of the great female leads in action, sci-fi, horror, whatever. It’s incredibly smart about how it introduces and develops her. It’s one of the central cinematic texts when it comes down to matters of sex and gender in genre film. It’s an object lesson in the skilled deployent of both shock and suspense. And it’s the movie that established how the Aliens are cat people rather than dog people. The Predators are dog people. This is maybe a longer conversation for a different time, but something tells me we’re not nearly done discussing ALIEN.