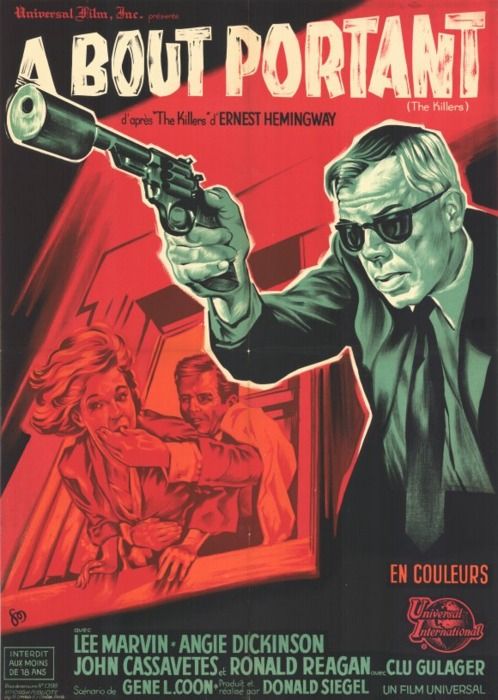 BAMcinématek is showing 1964’s THE KILLERS tonight as part of their series honoring the contributions of John Cassavetes to cinema. As a filmmaker he became a landmark figure in American independent film, but before that, Cassavetes was a refreshingly anarchic presence in mainstream studio pictures. I’m thinking primarily of his devilish turn in ROSEMARY’S BABY and his sardonic, rebellious and doomed Private Franko in THE DIRTY DOZEN. He took the studio jobs so he could pay for his smaller independent projects, which were more concerned with the kind of people you could meet in life, not outsized anti-heroes or supernatural figures. I’m not as knowledgeable on the matter of Cassavetes as I would like to be, so let’s move on to a couple of guys I know something more about. THE KILLERS was directed by Don Siegel and it stars Lee Marvin. Siegel is best remembered today for his work with Clint Eastwood, most notoriously on DIRTY HARRY, but his career is somehow even more fascinating than that. As a director, he was a workhorse and a journeyman, moving between television and features, between film noir westerns, musicals and horror films. It’s certainly arguable that his work with Clint was his most artistically rewarding period, but that argument should not overlook his extensively solid filmography. THE KILLERS is a highlight. Based on a short story by Ernest Hemingway, THE KILLERS was made into a 1946 feature by Robert Siodmak (PHANTOM LADY) that starred Burt Lancaster and Ava Gardner. (Criterion collected the various versions of the tale in one terrific package.) So in keeping with my point yesterday that a remake or re-envisioning isn’t by definition a violation, Siegel’s version is a thrilling complement to the earlier film. 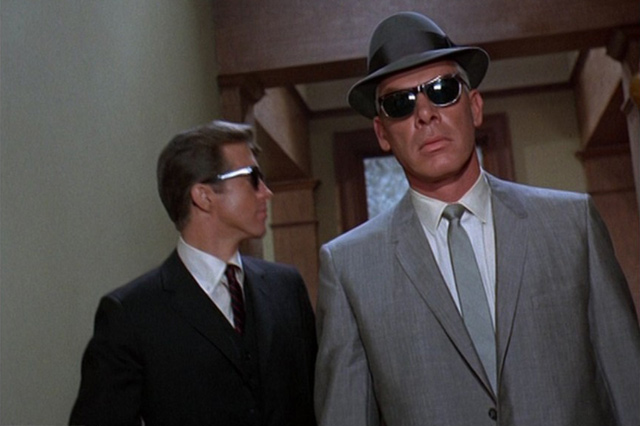 Lee Marvin had been in movies for a decade and a half before he played hired killer Charlie Strom. He had the lead role in the TV show M Squad, but had mainly played henchmen and heavies in feature films before THE KILLERS. Originally, THE KILLERS was meant to be a TV-movie — back then, made-for-TV movies were several cuts above SHARKNADO — but due to its violent content, it was released in theaters instead. By today’s standards, of course, it’s not that violent at all, but on a philosophical level, it is still a brutal piece of work. 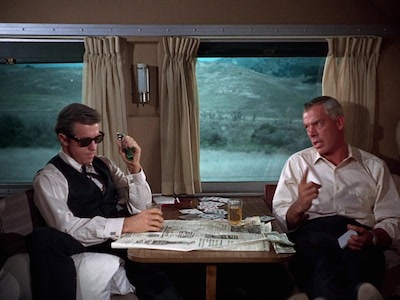 Marvin and beloved character actor Clu Gulager (later of THE RETURN OF THE LIVING DEAD) play hitmen who burst into a school for the blind — this part is still pretty shocking — and shoot down a teacher (Cassavetes) in cold blood. Generally speaking, murder ain’t no thing to this pair, but Marvin in particular is haunted by Cassavetes’ calm resignation to his fate. He can’t let it go, and backtracks through the contract to find out why a crime boss (President Ronald Reagan, no political comment here) hired them to kill this man. 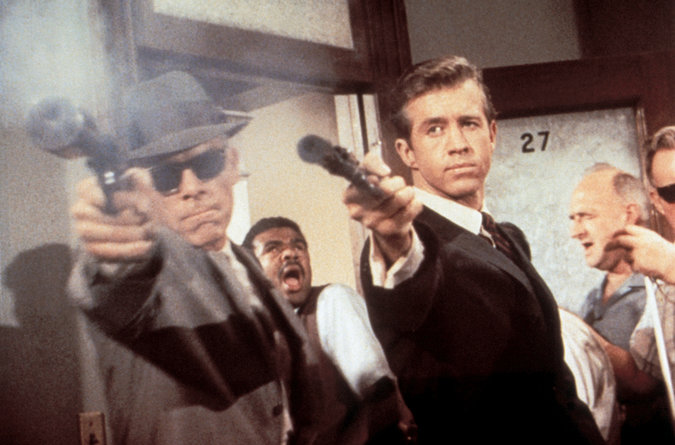 It turns out Cassavetes was once a professional race car driver who got wrapped up with Reagan because of a woman, played by Angie Dickinson who would co-star with Lee Marvin again a couple years later in POINT BLANK. Cassavetes truly loved Dickinson but she was Reagan’s girl, and she double-crossed him. I recount all this not to deprive you of any plot surprises, but to give just enough set-up to explain how this movie gives you the image of John Cassavetes decking Ronald Reagan in the jaw, a visual which is in retrospect fraught with all kinds of countercultural implications. Beyond that, the story of the Cassavetes and Dickinson characters is unusually affecting, despite the fact that even in 1964 we’d seen this story many times before. Part of the way that works is due to the story’s flashback-heavy structure, well told by Siegel and screenwriter Gene L. Coon (a writer on the original Star Trek series) — the procession of events being parcelled out gives them a kind of suspense they might not have had with a more linear structure. 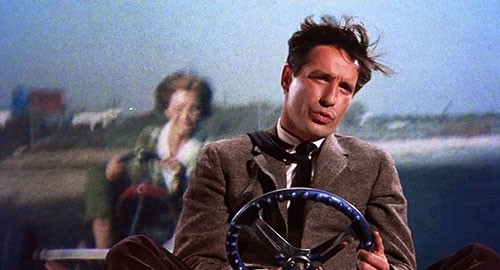 A nicely melancholy performance by character actor Claude Akins (RIO BRAVO) as Cassavetes’ trusted friend and mechanic adds to the atmosphere too. It’s also the elemental power of Hemingway’s original story, and the way Siegel commits to its harshness, that makes an impact: It plays like a detective story, yet the detectives are the killers, and they’re not interested in the romantic details, the way the audience probably is. They’re cynical but we (hopefully) are not. That tension between audience and protagonist is weird and powerful. 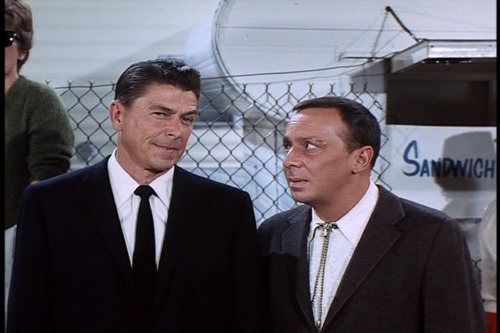 Beyond all that, the supporting performance of Norman Fell, who you know best from Three’s Company, but who you may also know from BULLITT and Siegel’s CHARLEY VARRICK, is something you will love. Once you’ve seen a remorseless Lee Marvin and a demented Clu Gulager interrogate a helpless Fell as he’s taking a schvitz, you will be one step closer to having seen everything.