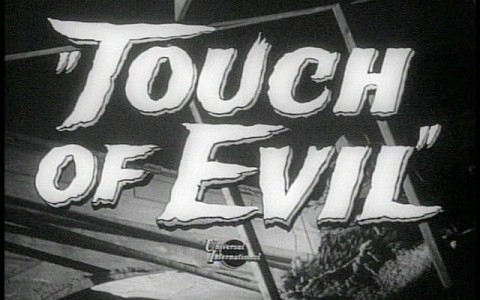 Here is a movie that can’t be contained by a single paragraph. There’s not a single aspect of its essence that lacks for greatness. Before you even see a human being in the frame, TOUCH OF EVIL announces its excellence with Russell Metty’s landmark camerawork, roving up and over the terrain of the bordertown where the story takes place. The typically cool, slyly swinging, swaggering score is by Henry Mancini.

Then the movie brings in its sole source of light, in the form of Janet Leigh, and one of its many sources of awesome weirdness in the form of Charlton Heston, playing her new husband. His role is as a Mexican cop, and of all the memorable histrionics Heston snarled through gritted teeth over the course of his career, there’s good reason he was never particularly revered for his accent work.

The sudden and conspicuous explosion of a car brings law enforcement officials to the scene, most notably Hank Quinlan, who is played by an unrecognizable Orson Welles. Famously, Welles also wrote and directed TOUCH OF EVIL. As galvanizing a figure as he was in CITIZEN KANE and as romantic a figure as he was in THE LADY FROM SHANGHAI, that’s how grotesque and captivating Welles is as Hank Quinlan. As visually repellent as Welles makes himself here, there’s a magnetism that makes him the immediate and eternal center of this film, and it’s wholly believable that Marlene Dietrich’s Tanya still carries residual feelings for Quinlan, no matter how far he’s gone to seed.

TOUCH OF EVIL is one of the more eccentric and unusual of the widely-acknowledged canon classics you’re likely to see. It works as tragic noir but it is also full of strange, unique touches — unless you know of another border thriller where the lovely blond ingenue has a hallucinatory drug trip in a seedy motel. Really! If you haven’t already, check it out, and have your cranial movie glossary instantly expanded. 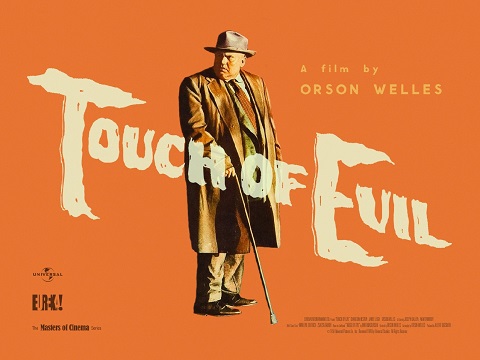 Here’s a drawing I did of Welles as Hank Quinlan: