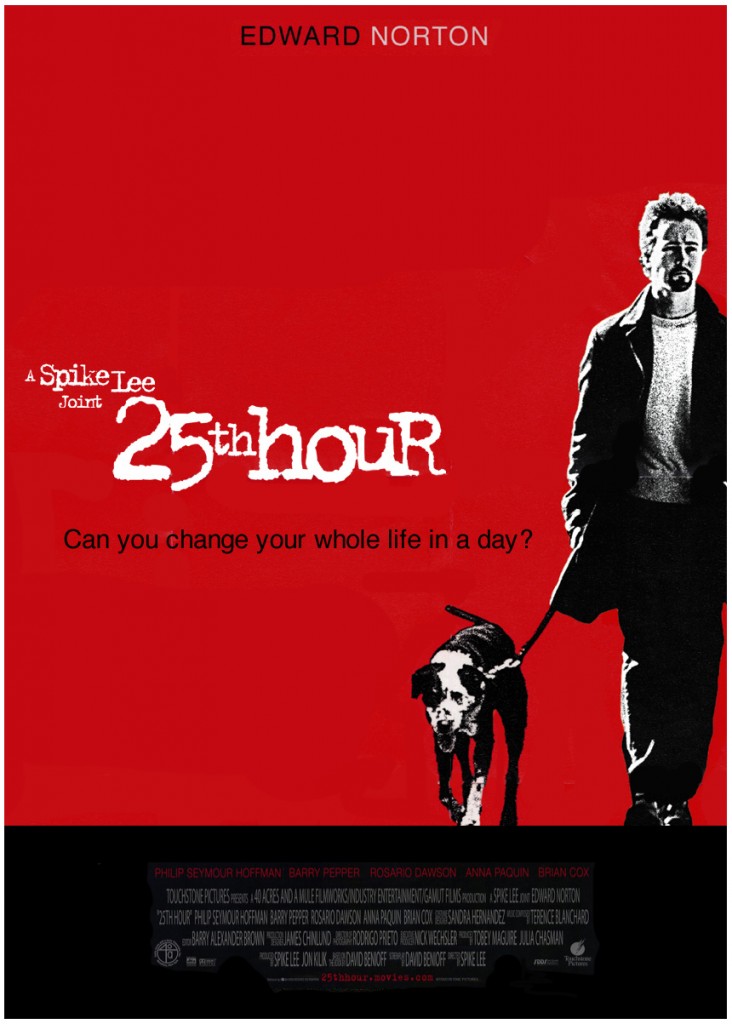 This is a movie that warrants an entire essay, maybe even a complete film analysis.  One day, I hope to give it one.  In the meanwhile, my abbreviated commentary will have to do. 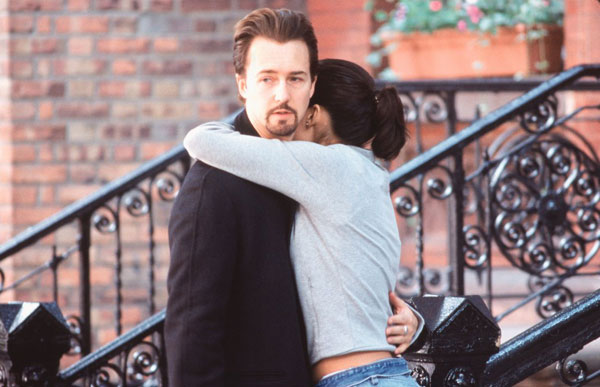 While my great passion is found over in the genre outskirts, I consider myself to be a filmgoer who more often than not agrees with what the mainstream defines as “a Great film” (CASABLANCA, THE GODFATHER, DO THE RIGHT THING). However, I love championing the lesser-acknowledged works that I believe to have greatness in them, and I’m more forgiving of flaws than most critical writers and thinkers seem to be. That’s me taking stock of myself, which may or may not be agreed-upon fact but which certainly plays into my experience with this film over a baker’s-dozen of years. 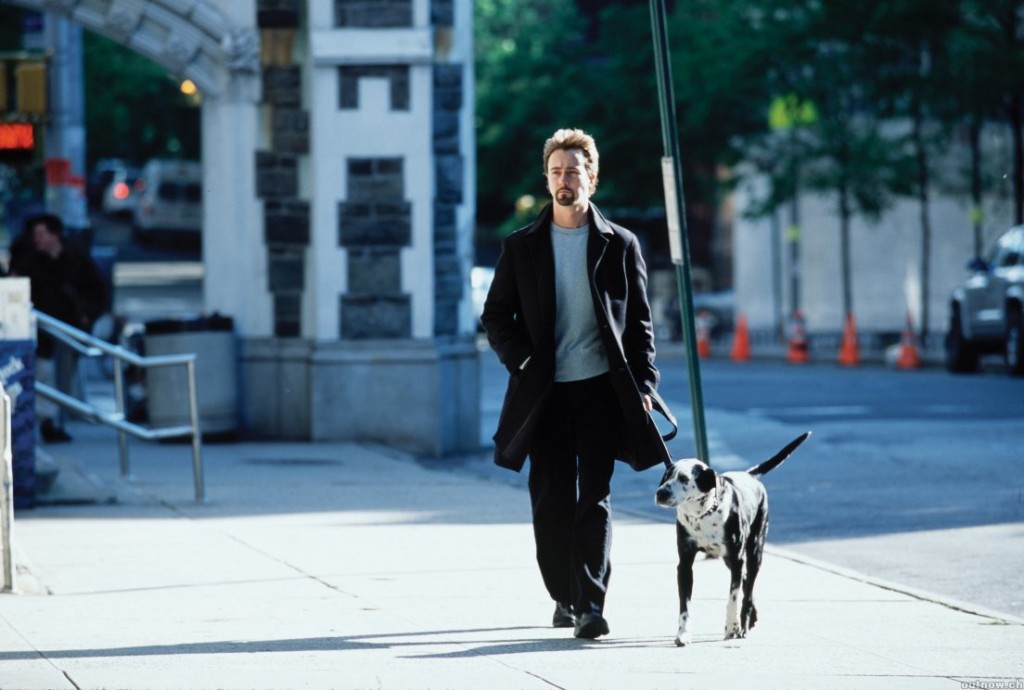 When I first wrote about 25TH HOUR, at the tail end of the last decade, it was as one of my ten favorites of all those released between 2000 and 2009. I loved it immediately, upon its release in 2002, but I had to fight a little bit for it then. It’s a film that some very smart people absolutely despise, but one which I absolutely adore, even despite what I concede are some fairly obvious flaws. I felt a little validated to see it place highly on some respectable end-of-decade lists, including A.O. Scott’s, the late Roger Ebert’s, and the top 50 by The Onion A.V. Club.) But with respect, I don’t remember any particular critical groundswell supporting the film at the time of its release. Maybe I’m wrong. It was a confusing time for most of us, and my memories of the popular and critical reception to a now-thirteen-year-old film may be selective. 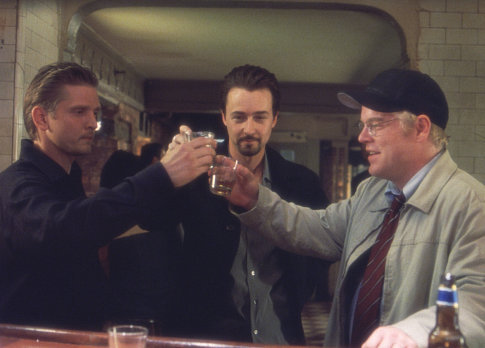 The story concerns a small-time drug dealer named Monty Brogan who has already been convicted and, due to the state laws at the time, is allowed some last moments of freedom before serving his sentence. We first meet Monty when he has 24 hours left before he has to report to prison upstate. Monty knows someone turned him in to the DEA, but who? Was it one of his former clients? His former employer, Uncle Nikolai? His enforcer, the simple-minded lummox Kostya? Most gnawingly, Monty has to wonder, was it his girlfriend, Naturelle?

The two-and-a-quarter hours of the film are spent as the hours wind down, as Monty half-heartedly searches for the guilty party  – he seems to know it won’t change anything about his impending fate — and as he squares personal and emotional accounts with his girlfriend, his dog Doyle (a rescue), his recovering-alcoholic father, and his two best childhood friends, both of whom have grown into very different people.

Why do I remember a more lukewarm response to this picture? One reason is that, 25TH HOUR would appear from outward elements to be a crime thriller, but its pace is mournful and its detours are novelistic. The characters are beautifully conflicted and beautifully played, but the film they live in is not urgently plotted in the way one might expect from a film whose very title indicates a ticking clock. Hell, aside from one notorious monologue where Monty’s emotions finally boil over, the film hardly feels as explosive and as righteously angry as any other Spike Lee movie happens to do. The other reason is that the one place Spike tips his hand strongest has to do with something many viewers may not have been ready to confront.

As is the case with many of Spike Lee’s films (I’m a committed fan but I do understand the critique), 25TH HOUR admittedly lays its intentions on thick at times, and the scene where two men have a debate with a window view of Ground Zero looming large in the background and the soundtrack blaring over it is almost inexcusably distracting – Spike’s objective with this directorial choice is a valid one (every other movie of that time pussied out by digitally erasing the Twin Towers or avoiding the subject altogether and Spike justifiably wanted to confront this cowardice head-on), but the fact remains that doing it does momentarily derail the actual narrative. The scene becomes about something else than the more story-centric conversation the two men are having. 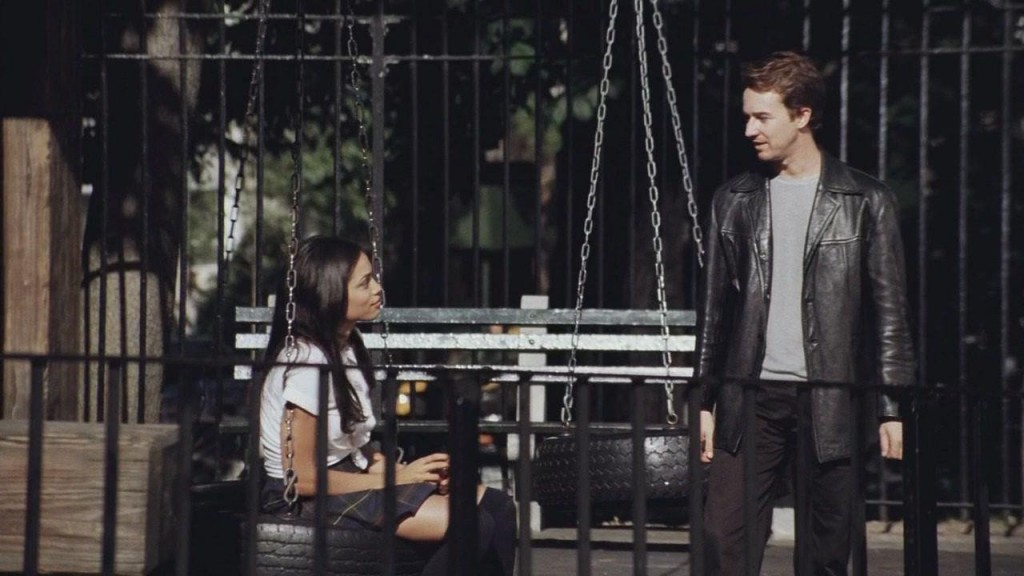 But so much else about 25TH HOUR is so good – the observant, emotionally detailed, quintessentially New York script by David Benioff (which was his ticket to a high-roller decade in Hollywood which continues today as he produces Game Of Thrones for HBO), the vibrant, scrappy cinematography by Rodrigo Prieto (outside of Roger Deakins, the best DP of the decade, who also gave us AMORES PERROS, 21 GRAMS, and BABEL), and one of the hands-down greatest New York scores ever written. by Spike’s longtime composer Terence Blanchard.

Really, this music breaks my heart every time.  It’s perfectly deployed in the movie (aside from that unfortunate Ground Zero scene), and it’s the perfect soundtrack to reside in your iPod as you walk the city streets in real life.

The cast of 25TH HOUR is one of the greatest ensembles assembled in the decade – Edward Norton, the impeccable Philip Seymour Hoffman, the brilliant & underused-by-most-movies Barry Pepper, the venerable Brian Cox, The Wire‘s Isiah Whitlock, Rosario Dawson, the guy who plays the Russian gangster Uncle Nikolai (his name is Levan Uchaneishvili), even Tony Siragusa is a snug fit – I only wish that the late Brittany Murphy had been cast over Anna Paquin, as was originally intended. 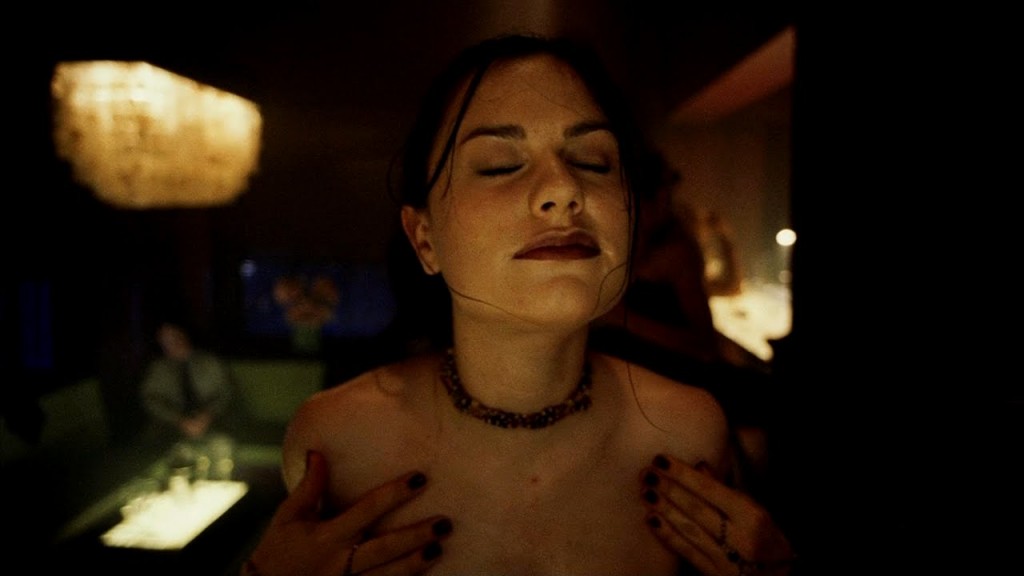 Anna Paquin is fine in the part, but she’s a more mannered performer to my eyes. There was always something scrappier and charmingly mischievous about Brittany Murphy, and unlike Paquin, she was a born Tri-Stater. That minor quibble otherwise, top to bottom, this is an impeccable match of actor to role. Canadian Barry Pepper, in particular, impresses by conjuring a very specific kind of loyal-but-cruel New York alpha-asshole.  Rosario Dawson is from New York. Barry Pepper isn’t. Damned if you’d know any different from watching the movie! 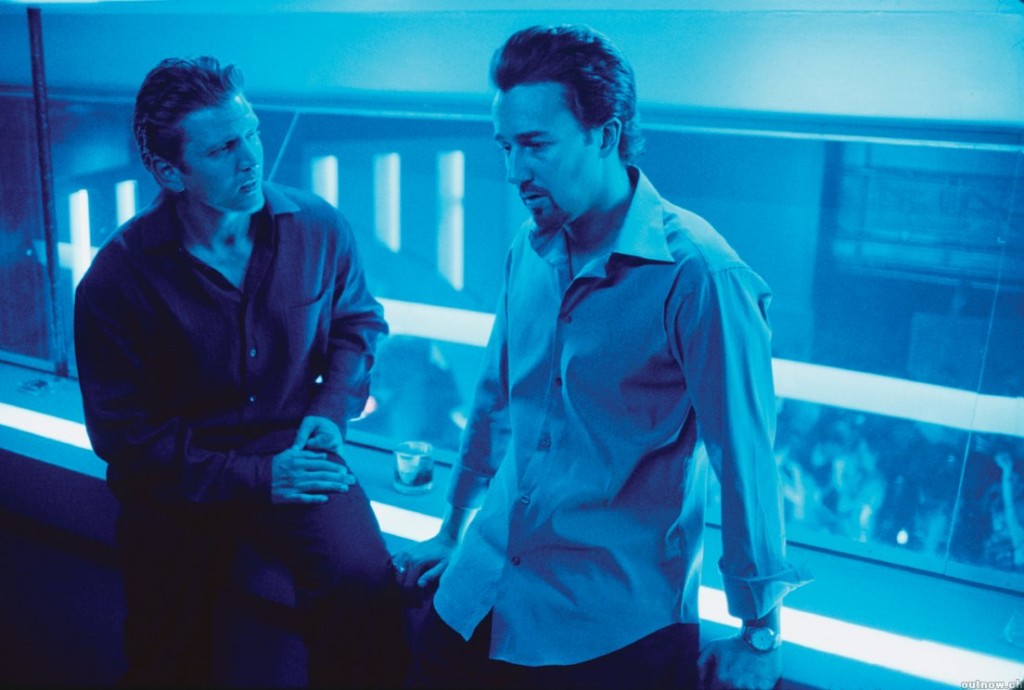 The result of all of the above is a movie that, as a New Yorker, I relate to in my soul. I wonder, if it was a so-called perfect film, would I respond to it as strongly? Its spiky inconsistencies give it a life that more widely-regarded “Perfect” films don’t quite drive home for me. The last line of the movie, so resonant for so many reasons, still echoes in my mind.

“This all came so close to never happening.”

Is this merely a dreamy capper to the extended imaginary sequence closing out the film that is narrated by Brian Cox’s character? If it is, that would be enough for this viewer. But it’s so much more. It’s about lament, about regret, about self-delusion, about hard truths, about life, about loss, about politics, about history, about destiny, about the coldest reality. This all came so close to never happening. But it did. So now what?

25TH HOUR screens tonight at the Museum of the Moving Image in Queens. Today’s date is most likely pertinent.