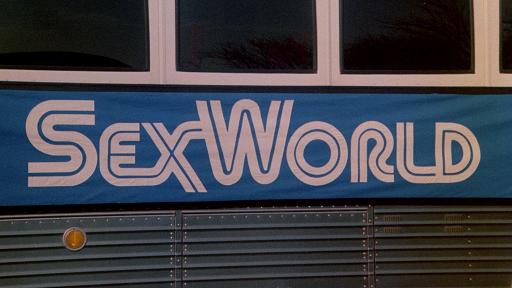 Director Anthony Spinelli was responsible for some of the best films of the golden era of American hardcore cinema, and when the Vinegar Syndrome label first launched, they did so with a Drive-In Collection double-feature of two Spinelli films, EXPECTATIONS and CONFESSIONS. Vinegar Syndrome has since released several more of Spinelli’s films in the Drive-In Collection and in a Peekarama double-feature, but one of his all-time biggest hits recently got a deluxe Blu-ray treatment: SEX WORLD (1977). Inspired by the 1973 sci-fi hit WESTWORLD (which was written and directed by Michael Crichton), SEX WORLD is a prime example of how adult cinema could explore different concepts and potentially difficult material that mainstream films wouldn’t touch, and how it could do so in a cinematically interesting way. It’s a far cry from the lazy “parodies” that adult video production companies pump out these days.

SEX WORLD opens with a large group of people climbing on board a bus that will take them to the titular resort for a weekend in which they are free to explore their ultimate sexual fantasies. As the tour guide explains what’s in store, the audience gets a peek into the private lives of the couples and single women who are on their way to Sex World. We learn they’re all coming from very different places, and looking for very different things: seemingly happily-married couple Joan and Jerry (Leslie Bovee and Kent Hall) are out to just have some fun, while decidedly unhappy couple Millicent and Ralph (Kay Parker and Jack Wright) are hoping to work out some of Ralph’s hang-ups that are killing their love life. Timid Lisa (Sharon Thorpe) can only connect sexually with men over the phone, and beautiful lesbian Dale (Annette Haven) wants to try making love with a man for the first time. Big-mouthed, bigoted Roger (John Leslie) gets what he thinks is the exact opposite of his ultimate fantasy in Jill (Desiree West), a beautiful and sexually aggressive black woman who quickly puts Roger in his place.

While the guests do interviews for the technicians to learn exactly what they need at Sex World, a control room of technicians watching from somewhere send down orders and direct the sexual partners to the proper rooms. Spinelli includes humorous snippets of interviews with secondary characters whose fantasies we don’t see acted out, as well as including bits of interviews with people (almost exclusively men) who only think they know what it is they want. The women in Spinelli’s world know what they want, sometimes with astonishing specificity. Lisa asks for someone who will notice and be nice to her, but she’s also intrigued by Johnnie Keyes, star of BEHIND THE GREEN DOOR, and ends up with an intriguing two-part fantasy (featuring Keyes as himself). Millicent is tired of Ralph’s creepy “mommy’s boy” schtick and wants a man who will treat her roughly (Joey Silvera seems only too happy to oblige). Joan has a surprising request that may send her home without a husband.

SEX WORLD is a prime example of ’70s adult cinema at its best. There’s plenty of sex, of course, but there’s also thoughtful shading of character (helped by a solid cast), and an honest look at the emotional fallout of its characters’ sexual escapades. Even better, Spinelli is content to leave the viewer with a number of unanswered questions. This is one of the best films Vinegar Syndrome has released yet, and they went all-out with this special edition Blu-ray set, limited to 1500 copies sold through VinegarSyndrome.com and Diabolikdvd.com. Restored in 4K from the original 35mm camera negative, this limited edition includes 3 discs: a Blu-ray including the film and extras, a DVD including the film, extras, and an alternate R-rated cut of the film, and a 16-track soundtrack cd. Other special features include interviews with actors Kay Parker and Joey Silvera and still photographer Joel Sussman, theatrical trailers for the film, and a reversible cover with alternate Italian artwork. The film looks and sounds fantastic, and the comprehensive package is a treat. This is one of the best releases yet from Vinegar Syndrome, and well worth special ordering.