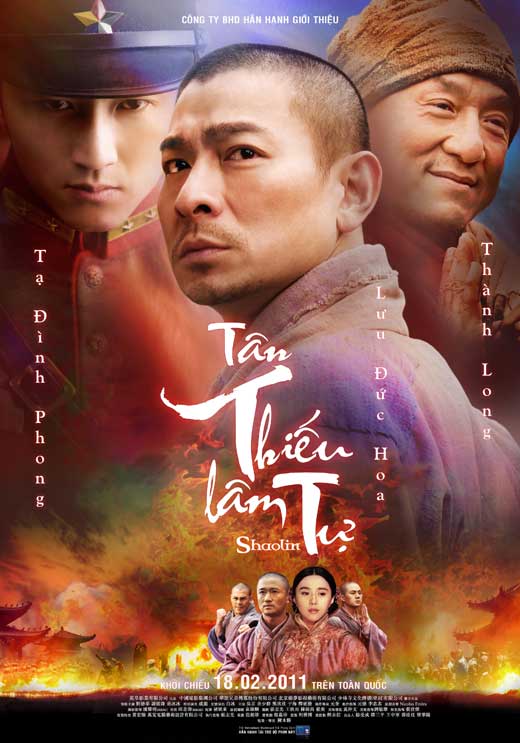 It has finally happened; all my local Blockbuster videos – or, as I refer to them, “The Used DVD Store” – have closed down. This shouldn’t surprise me in the least – I haven’t rented a movie in years, except through Netflix, and if you’re only interested in renting, I suppose the buck-a-night Redbox deal is pretty sweet. But as befits my encroaching age and incipient dinosaur-hood, I like to own my movies. This was a childhood dream, being able to watch a movie anytime I want, without suffering the cold equations of TV programming. One of the many, many reasons I’m not taking to streaming like everybody says I should. Between people complaining about stuttering feeds and having no control over what is available on any given evening, I just don’t feel the technology is quite there yet. Not to mention I just bought a Blu-Ray player, and my already high expectations of audio and video quality have gone through the roof. 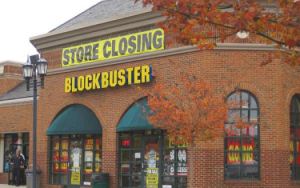 I’m aware this puts me in the same camp as audiophiles who were dismayed that people were really going for those compressed mp3 thingies that JUST. DIDN’T. SOUND RIGHT. So be it. Nothing irks me faster than digital artifacts in a moving picture.

Well, that was a hell of a digression. Didn’t mean to go there. What I was trying to say is that I was one of the vultures picking over the carcass of Blockbuster, buying used discs while I still could. I got mainly stuff I had only sort of wanted – you know, not enough to actually go out and buy them outright, but maybe enough to put on my Amazon Wish List or maybe that dreaded Netflix Instant Queue – but here it is, it’s less than ten bucks (often less than four), I’ll take it. Copies of GRIZZLY MAN and CAVE OF FORGOTTEN DREAMS. SAUNA, one of the few horror movies in the last few years to actually have an effect on me; Blu-Rays of RAGING BULL, BLACK DYNAMITE and VANISHING POINT. Some flicks I had curiosity about: SUCK, DEAD SNOW, PONTYPOOL, HOBO WITH A SHOTGUN, and finally, SHAOLIN. 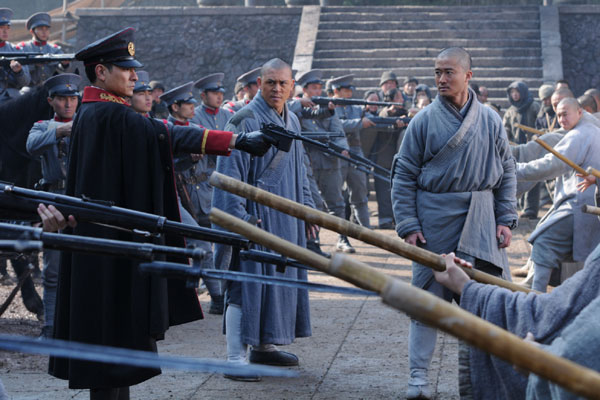 Andy Lau plays General Hou Jie, a warlord who pursues a vanquished enemy into the Shaolin Temple and kills him. (I’ll note here that this is sometime in the early 20th century. Hou appears to be using the Chinese version of the broomstick Mauser pistol, which could place it around 1920 or so). The wheel of karma and movie plots being what it is, Hou will wind up at that selfsame temple with his mortally wounded daughter, far too late to save her. Having lost everything, Hou begs to become a monk, and through the study of kung fu and Buddhist sutras, he attains a state of martial zen; he releases all the greed, fear and hate that made him such a terror in the Outside World. Alas, the subordinate who mutinied against him is still busy, and the Outside World will soon come calling on the Temple again. 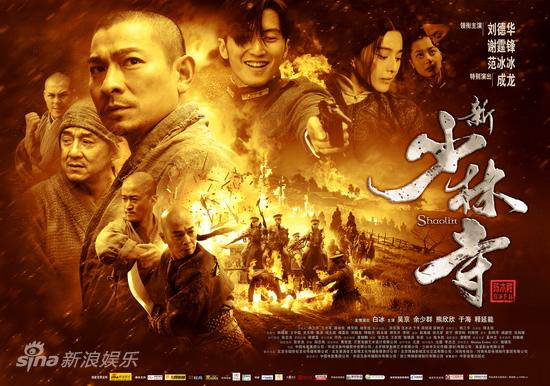 That’s a sturdy plot, if somewhat unoriginal. Where SHAOLIN establishes its own identity is in the wholehearted conversion of Hou. He realizes that he is responsible for the behavior of his former lieutenant, Cao Man (Nicholas Tse), and wishes to not only save the people Cao will murder to cover his sale of Chinese relics to foreigners, but to also save Cao himself, to share the state of grace that total repentance has given him. 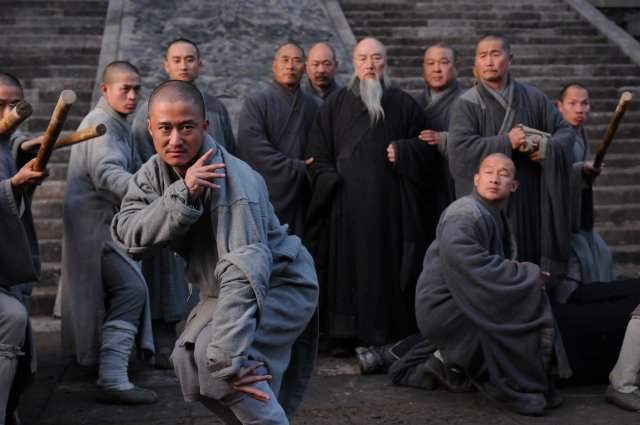 And, surprisingly, the movie has the moral courage to actually go through with it. The movie has an almost Shakespearean body count by the end, but Cao is one of the survivors, and seeing him shattered and crying in the burning ruins of a battlefield, surrounded by dead bodies, is truly moving. 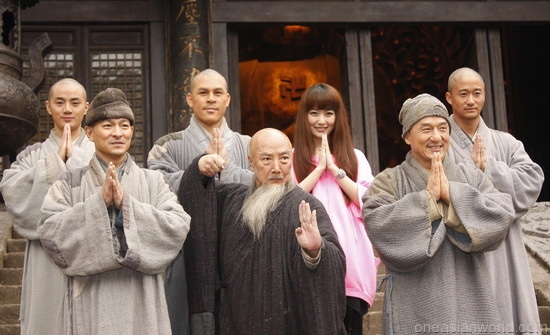 SHAOLIN doesn’t follow the template of the last few modern martial arts movies I’ve seen, which also predisposes me toward liking it. I know I’ve mentioned it before, but here we go again: Jet Li’s FEARLESS, IP MAN & IP MAN 2, TRUE LEGEND all end with the hero squaring off against a foreign devil – several foreign devils, in the case of TRUE LEGEND, and some tigers – and the hero must beat the foreign devil for Chinese honor. I’m okay with that concept, but not a steady diet of it. (LEGEND OF THE FIST: THE RETURN OF CHEN ZHEN also did this, but I didn’t remotely like that movie, so it doesn’t exist) I fear the chances of getting a movie like this out of mainland China that doesn’t double somehow as propaganda are getting increasingly slim. 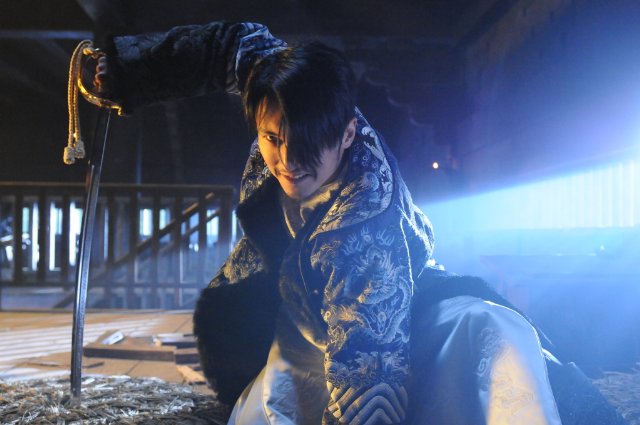 There are, absolutely, foreign devils in SHAOLIN, military types that want to sell machine guns to the local warlords in exchange for building a railroad through their territory. It’s these bastards who are buying the relics, and who, to cover up their own crimes and failures, order the shelling of the Temple during the climactic battle. Man, foreign devils ruin everything. 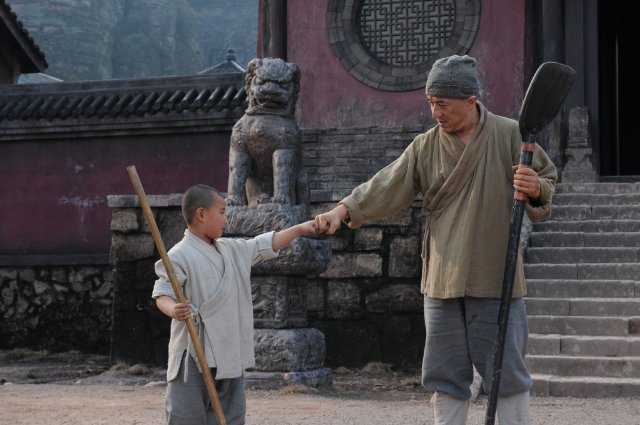 Jackie Chan is in there, too, playing a supposedly minor role as the Temple Cook, who studied martial arts for a few years, decided he didn’t get it, and took to the kitchen instead. Of course, the Cook slings around huge iron woks and man-sized piles of dough with no trouble, so we know he’s eventually going to get his fight scene. Chan is, as usual, affable and tremendously likable. Lau has always been a fine, charismatic actor, and though he’s not a trained martial artist, moves well enough that a skillful director can always make him look good in the action scenes, and Benny Chan’s been around long enough to know how that works. His camera swoops around the Temple, making it a character in its own right; it and the shanty town built around it by refugees give the proceedings a properly historic heft, a timeless, epic feeling that extends beyond the miserably mundane concerns of the warlords. 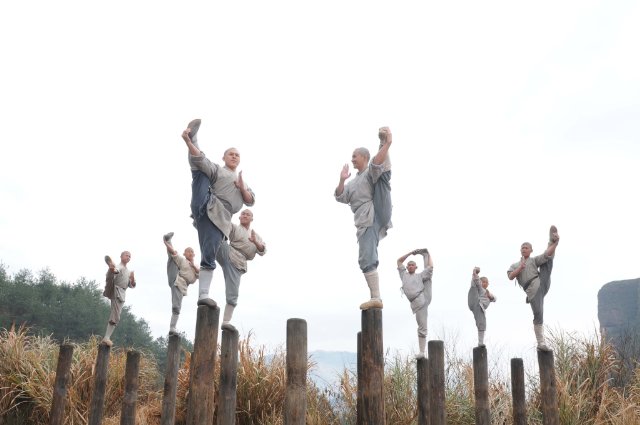 SHAOLIN is a movie that treads ground certainly treaded before, but treads it with ease and solemnity. It may all seem very familiar, but it is familiar like your favorite comfort food: warming and always welcome.