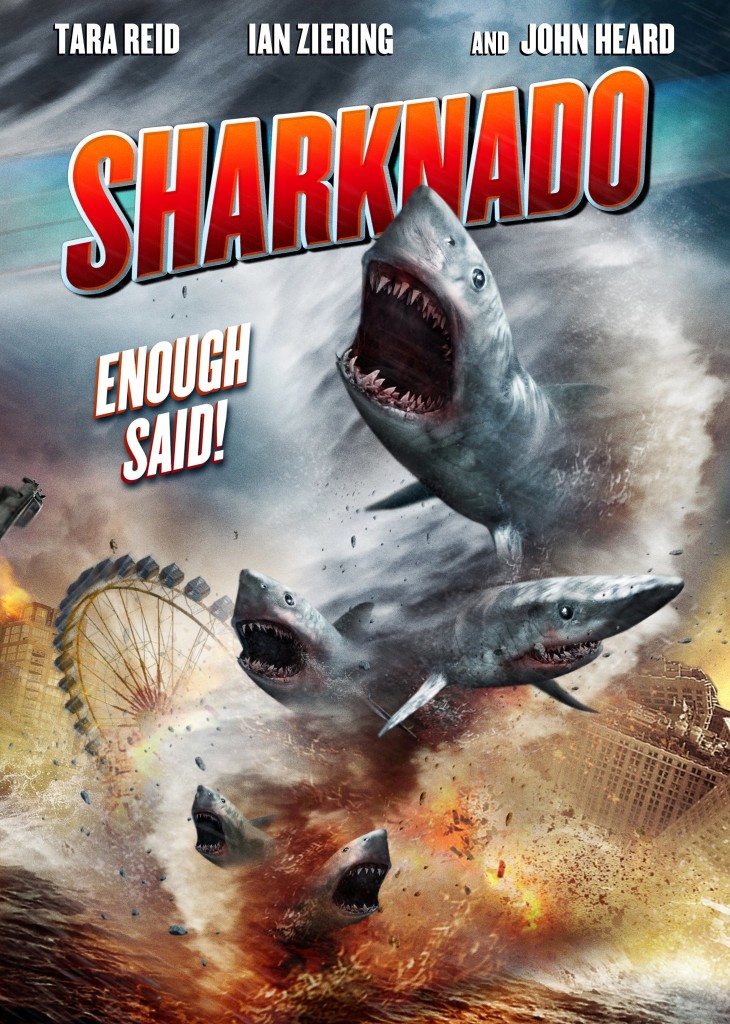 It’s been nearly three weeks since the cultural event named SHARKNADO hit the American coasts.  We all remember where we were on Thursday, July 11, 2013, when SHARKNADO touched down, igniting a flurry of clever tweets and hastily-arranged movie nights attended by those unable to figure out which of their many channels is the “Syfy” network.  It was one evening that we all came together as a nation, regardless of race, creed, or political orientation, to bask as one in the hopes of watching a film about a tornado full of sharks.

We had been warned, of course, in the preceding weeks, about SHARKNADO’s existence.  While The Asylum, the architects responsible for creating the brutal phenomena, kept details under wraps, once the nature of the project was released and the name revealed, the SyFy network did due diligence to warn us, mentioning it at every opportunity, even during the wrestling it inexplicably airs.  Once the concept and catchy name were issued to the public, the awareness reached epic proportions. 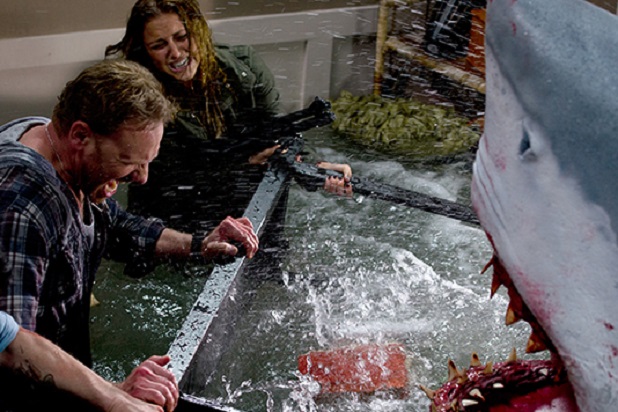 Despite the fact that The Asylum had been combining natural forces, C-list actors and subpar CGI into, essentially, ephemeral “camp” for years (witness 2010’s Jaleel White-starring MEGA SHARK VS. CROCOSAURUS), their output had been without notice beyond the psychotronic storm chaser fanatics that pay close attention to the legal battles of the production company’s BATTLESHIP rip-off.  SHARKNADO was the concept and name that became big enough for those outside the B-movie bubble to finally take heed.

The SHARKNADO panic began to build.  Everyone began tweeting their own variations on the weather-with-an-animal concept with an elevated urgency, hoping-praying-that they were the first one to come up with it, and thus momentarily win the internet.  The nation begin preparing for an onslaught of Hurricanines and Tsunamoose, and the major press began to cover the storm, interrupting their frivolous coverage of immigration reform and Elizabeth Hasselbeck leaving “The View” for important bulletins on the SHARKNADO’s approach and interviews with former Fangoria writer Anthony Ferrante, who guided the storm to its final destination.

That night was one of quiet contemplation, as we huddled together en masse to watch the disaster unfold on television.  Instead of uniting in verbal conversation, we took our grief and confusion online, desperate to understand just what was happening before our very eyes and how something this ill-conceived could have possibly drawn us in.  At its peak, it’s estimated that over 5,000 tweets per minute were being sent out into the world; One imagines a majority of them were concern over the fates of those involved, especially CUTTER’S WAY star John Heard, who didn’t deserve such a fate. In fact, most tweets weren’t about the film itself, but suggestions of other ideas, concepts and dialogue that the film should be embracing. If the media wasn’t clear on exactly what was happening, audiences leaped to their own theories.

But I don’t have to tell you all this.  You were there.  We all were, at least in spirit. 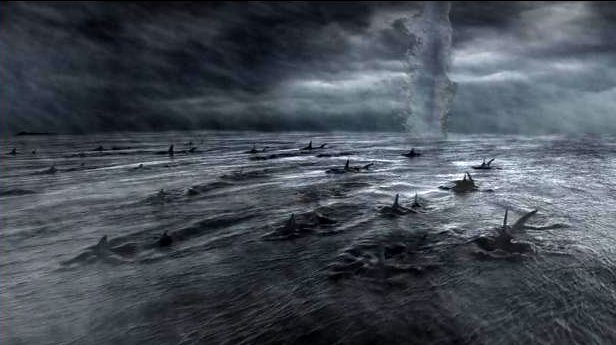 As the SHARKNADO prepares to return this Friday, however, we need to look back on the true victims of the event.  The Syfy channel was among the hardest hit, with their promise of a sure-fire hit franchise that was, instead, a renewed SNAKES ON A PLANE-ing of a concept that resulted in far more people being interested in the title and idea than in actually watching the product.  Millions of those that did watch, however, also found that they’d given two hours of their lives to forced camp that was neither tongue-in-cheek enough to be enjoyable nor serious enough to be mocked, resulting in the reward of only about five minutes worth of ridiculous-clever shark attack moments delivered via the cheapest CGI available.  We all know friends, family, and other loved ones who lost an entire evening to the process.  Some even ordered take-out.

The most tragic victim of SHARKNADO, however, has been mostly forgotten in the following weeks, even moreso than Ian Ziering.  The hardest hit by the SHARKNADO storm is the concept of effort in low-budget exploitation filmmaking.

Much of the mainstream press seemed to embrace the idea of the Sharknado, ignoring its wider, more controversial, cultural climate change implications.  Time Magazine raved about the film’s entertainment value, but seemed reluctant to point out examples other than the admittedly memorably absurd climax, mostly citing the film’s “brilliantly executed concept.”  Others focused entirely on the cultural phenomenon it created and virtually ignored the film itself.  Some, like Hitflix’s Alan Sepinwall, enjoyed the film’s haphazard characters and eye-rolling backstories even while admitting moments stolen from other, better, films (one character’s dislike for sharks is essentially a less interesting version of Phoebe Cates’ aversion to Christmas in GREMLINS) and admits that he’s seen few other SyFy-made films and doesn’t know if this one is any better or worse. 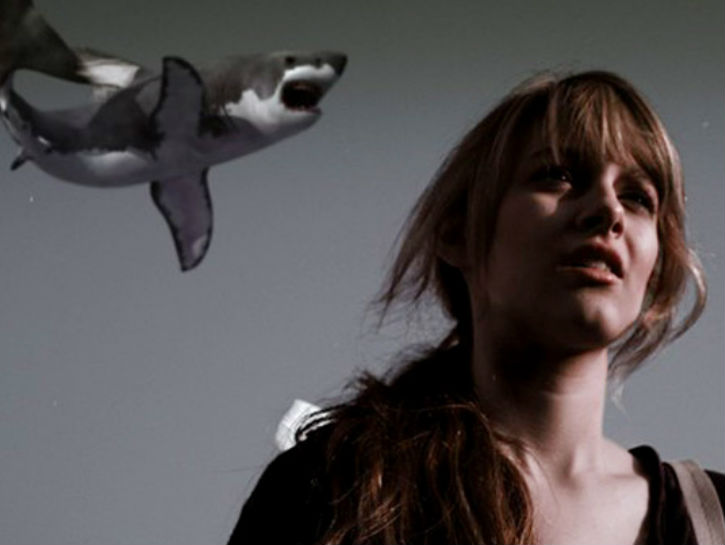 Someone more familiar with the cultural climate that produced the SHARKNADO monstrosity may have been more familiar, and could have informed Sepinwall that SHARKNADO’s production is no better or worse than standard Asylum product – that is, nobody takes anything all that seriously, the action starts immediately so there’s no build-up, tension, or even the attempt at science, and there’s a lot of forced bland character development via witless dialogue in between sequences of cheap looking CGI.  It’s highly entertaining simply because it doesn’t even try.

Cultural climate change experts like Badass Digest’s Devin Faraci could have told him differently.  In Faraci’s write-up on the phenomena, ignored by the lamestream media, he delves into the idea that while SHARKNADO is pure exploitation, in that it’s just a concept that gets people to watch and thus, exploiting the natural curiosity of people, it lacks the sincerity that the likes of THE ROOM or PLAN 9 FROM OUTER SPACE have or the genuine ambition and talent of much of the output Roger Corman produced in the ‘70s that made those drive-in films so endearing beyond the concepts and poster art used to get people into the theater. 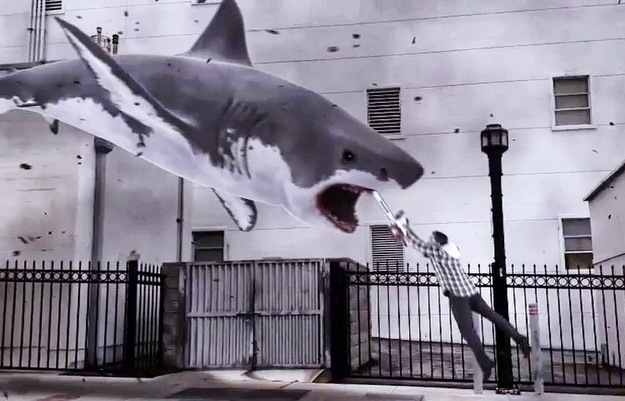 It’s this genuine entertainment value that sets the likes of TREMORS aside from the slapdash, quickie nature of SHARKNADO, and it’s a lesson that could have been learned by the SyFy Channel, who saw that all the online warnings in the world cannot prevent a disaster.  Only if we come together as a unit and examine how cultural climate change creates mass phenomena like SHARKNADO can we truly stop these horrors from occurring.

The fate of the planet rests in our hands as viewers that encourage this sort of thing.  Already, despite the low ratings, a sequel to SHARKNADO has been green-lit based solely on the fact that everyone knows what it is now, showing that actual content-and even ratings-don’t matter.   A cultural event’s prominence on social media is now more powerful than money itself, and if we wish to live in a world where our grandchildren are forced to watch Tom Welling and Efram Zimbalist Jr. Jr. in ALMIGHTY THOR VS. THUNDERSTORKS and have them be convinced that the movie is fun just because it’s “so bad,” we need to stop embracing pop culture that exists solely because of its own absurdity.

What will you decide?   As someone who clicked on this article solely because it’s about SHARKNADO, the choice is up to you.