Isaac Asimov, whose 94th birthday would have been today, has never had good luck when it came to having his works adapted into other media. When you search for Asimov on the IMDb, in fact, the first thing that comes up is this questionable association:

A sub-par Robin Williams film shouldn’t be the most prominent adaptation of a work from one of the masters of science fiction, but few takes on his stories have done much better. Alex Proyas’s I, ROBOT took the laws of robotics Asimov introduced and threw out everything else from the book it shares its name with. Corman tried and failed to adapt NIGHTFALL twice. Animator Rene Laloux did a compelling job with GANDAHAR, released in the U.S. as LIGHT YEARS, but it never quite became the cult hit of the director’s FANTASTIC PLANET. (There was also an adpatation of “Teach 109” made for the USA Network under the title THE ANDROID AFFAIR, but we’ll get to that as part of our USA World Premiere Movie project.) A look at his IMDb credits looks like the adaptations of a forgotten pulp writer from the ’40s, not the award-winning writer who headlined his own magazine.

One of the odder attempts to adapt his work was 1988’s ISAAC ASIMOV’S ROBOTS VCR MYSTERY GAME, an artifact of the brief trend of trying to turn the VCR into a game-playing unit by having newly-created movies that interacted somehow with a board game in the real world side of the screen. The two CLUE VCR games were probably the best-selling, but titles ranged from kid-friendly games like the CANDY LAND VCR BOARD GAME to spooky outings like ATMOSFEAR or the NIGHTMARE series. There was even a WAYNE’S WORLD game, which I’m sure was a blast to play. NOT!

Loosely based on Asimov’s robot mythology, ROBOTS puts the game players in the middle of a 23rd century mystery through the eyes of “Elijah Bailey, Ace Detective” (Stephen Rowe). Crime has vanished for the past century, so Elijah is just as surprised as anyone when an attempt is made on the life of scientist Dr. Fastolfe. Is the killer a human, and if so, is it one of the “spacers,” the humans who’ve emigrated to space and have become masters of the robot? Or is it, in fact, a robot itself, despite the fact that the laws of robotics forbids them from hunting humans?

You’ll have to play the game to find the answers, but the film itself is a surprisingly entertaining time killer. At about 45 minutes, it’s a bit long to be called a “short film,” and it certainly loses something when you don’t have the cards it recommends you look it (there are also New Jersey jokes), but it’s still one of the more interesting attempts to take on the work of the man who essentially invented robot philosophy. 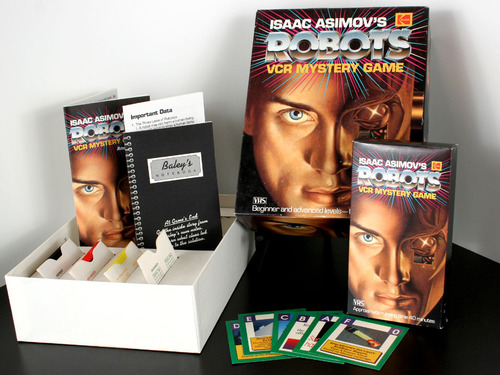