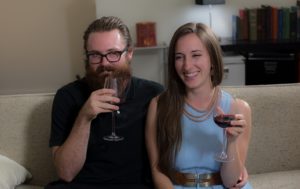 Spend long enough time in a relationship and you will wind up stuck at an awkward dinner with your significant other and the only other couple you both know—whether you like each other or not. That is the scenario that COUPLES NIGHT plays with so well.

We have all been in this situation, but writer/directors The Summers Brothers take the situation and twist it into a very funny mixture of squirm comedy and straight up weirdness with a horror tinge. This is fun viewing with a nifty twist and great final shot that does not overstay its welcome. More short films could take a few notes from the efficiency at play here.

Special thanks to DAILY GRINDHOUSE contributor Rob Dean for recommending this one.