When I first saw the trailer for the original SUPER TROOPERS some 16 years ago, I thought it looked incredibly stupid. When it got to DVD, or VHS, or whatever it was back then, I checked it out. And my initial assumption was correct — it was stupid. BUT, it was funny, and I loved it.

Over the course of the next few years, the movie became a cult classic. And with that, the people did what they always do – they went on the internet and demanded more! I was not one of those people. I wanted more of the Broken Lizard crew (the five writers and stars of the film) but I didn’t feel  SUPER TROOPERS warranted a sequel. Yes, it was hilarious, but it was a great stand-alone film that was loved because of the gags and performers, not the plot.

Broken Lizard made three more films in the decade that followed, most notably Beerfest in 2006, which almost felt like a sequel to SUPER TROOPERS akin to Edgar Wright’s Cornetto trilogy (SHAUN OF THE DEAD, HOT FUZZ, and THE WORLD’S END). I wish Broken Lizard had gone the way of Wright’s Cornetto and made a third film completely separate of the two. That being said, 2004’s horror-comedy CLUB DREAD and 2009’s THE SLAMMIN’ SALMON were rather disappointing, so perhaps another highway patrol movie was the best route to go. 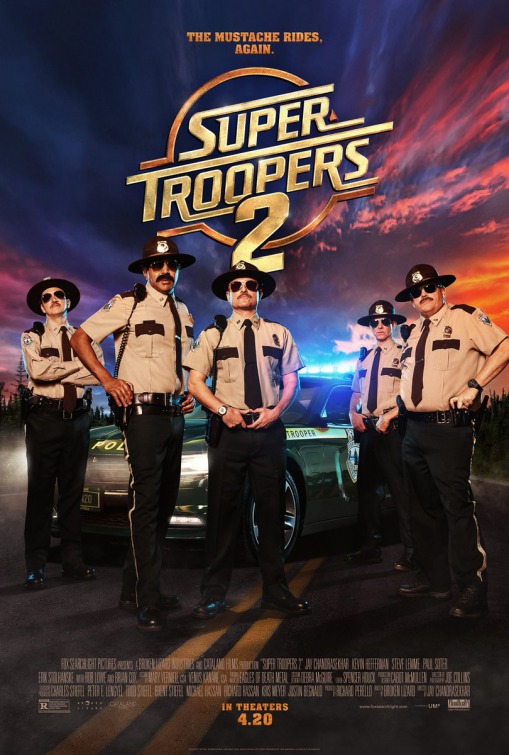 SUPER TROOPERS 2 is set years after the first film, with most of the squad now working construction after being fired from their jobs with the Spurbury Police department when a mysterious ride along with Fred Savage goes wrong (this running joke eventually pays off in a rather predictable sense – but I still laughed). The United States government discovers that part of the US/Canada border in Vermont is incorrect, and a town in Canada is actually on US soil. While the two countries hash things out and transition the land and people to America, that town is now in need of, you guessed it, the United States highway patrol!

Enter Governor OG Wonder Woman (the returning Lynda Carter) to give the boys, along with Captain O’Hagan (also returning Brian Cox) their jobs back on a two week trial basis, assuming nothing goes wrong and the fellas stay out of trouble. Predictably, it does go wrong and the fellas don’t stay out of trouble thanks to the mayor (Rob Lowe) and the Canadian Mounties they’ve replaced, as the locals are none too pleased to now be American and aren’t interested in making things easy on their new police force.

Drugs are discovered, again. One of the troopers falls for a pretty girl, again. They brawl with local law enforcement, again. The plot is not far off from the first installment, but it doesn’t need to be. It’s a formulaic sequel to a comedy – same basic plot as the first, with some callbacks to the original, built around the jokes and gags and not the storyline.

Sure, we’d all like to have our minds blown when we go see a movie, especially a comedy considering they are so difficult to make. But this is a movie about highway patrol officers, and we can’t watch them pull people over for 90 minutes, so there needs to be a homicide or drug cartel to distract them. Where did the drugs come from? Who is behind everything? Is it the local police again??? You get it.

You don’t care about any of the plot though. You didn’t see SUPER TROOPERS because of the “brilliant plotline”, you watched it because it was funny, or likely because somebody told you it was funny. You’re not reading any of this to find out what happened either, you just want to know if SUPER TROOPERS 2 is going to make you laugh.

I laughed, but not like I did at the first. That was 15 years ago though – I’ve aged and (slightly) matured, perhaps dick and fart jokes just aren’t as funny to me anymore (Honestly though, they are still a little funny to me). There’s plenty of “punch him in the balls” and “stereotypical Canadian” jokes that are predictable and cheap, and land flat, but some work, and there is a lot to laugh at here.

Broken Lizard set the bar high with SUPER TROOPERS, which is easier to do when the general public doesn’t know who you are and expectations are low. The pressure is a lot this time around however, as fans have been clamoring for this movie for over a decade, so much so that they funded the movie via Broken Lizard’s crowd-sourcing campaign within 2 days three years ago, and more than doubled their original goal of $2 million within a month.

Comedy is hard, and it’s worth noting that Broken Lizard took their time with this project. I feel that had to have benefited the film – it surely gave them additional time to come up with more creative gags, in turn limiting their callbacks and rehashing of old jokes, as they tried to get this film right (or as right as they could, considering how popular the first film is).

I enjoyed the movie. Not nearly as much as I enjoyed the first, but I laughed a fair amount, and that’s really all that matters. It’s obviously not for everybody though – if you thought the first was funny, you’ll laugh at this one as well. If you’re bored this weekend, or perhaps you’re a stoner looking to blaze up on 4/20 and shove a bucket of popcorn down your gullet, go for a laugh before INFINITY WAR destroys the box office next week. Otherwise, this movie is perfect for the couch when it hits your favorite streaming service.