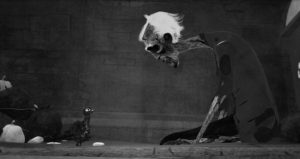 Like a lot of people, I suffer from zombie fatigue. Occasionally, something new will come along in the genre that catches my interest, but for the most part, I just want a large break from the unending undead horde that afflicts so much of pop culture.

So you understand my trepidation when I decided to give THE HUNGRY CORPSE a watch. Even though it hit film festivals in 2013, I somehow had managed not to run across it before a couple of weeks ago. Despite a title that sounds like a drive-in gorefest, it is actually a gentle, funny, and heartwarming animated story about two misfits—the titular undead gentleman (voiced by Bill Nighy) who is literally falling apart on the streets of London and a pigeon with a broken wing (voiced by Stephen Mangan)—as they meet and gradually form a friendship aimed at alleviating their loneliness. 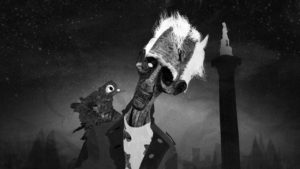 A lyrical script with hints of darkness by James Pout and a lush score by Tim Goalen pull together this odd concept with the beautiful animation on display. I realize it is not exactly grindhouse, but sometimes, a little uplift is called for. Surprisingly, THE HUNGRY CORPSE provides just that.