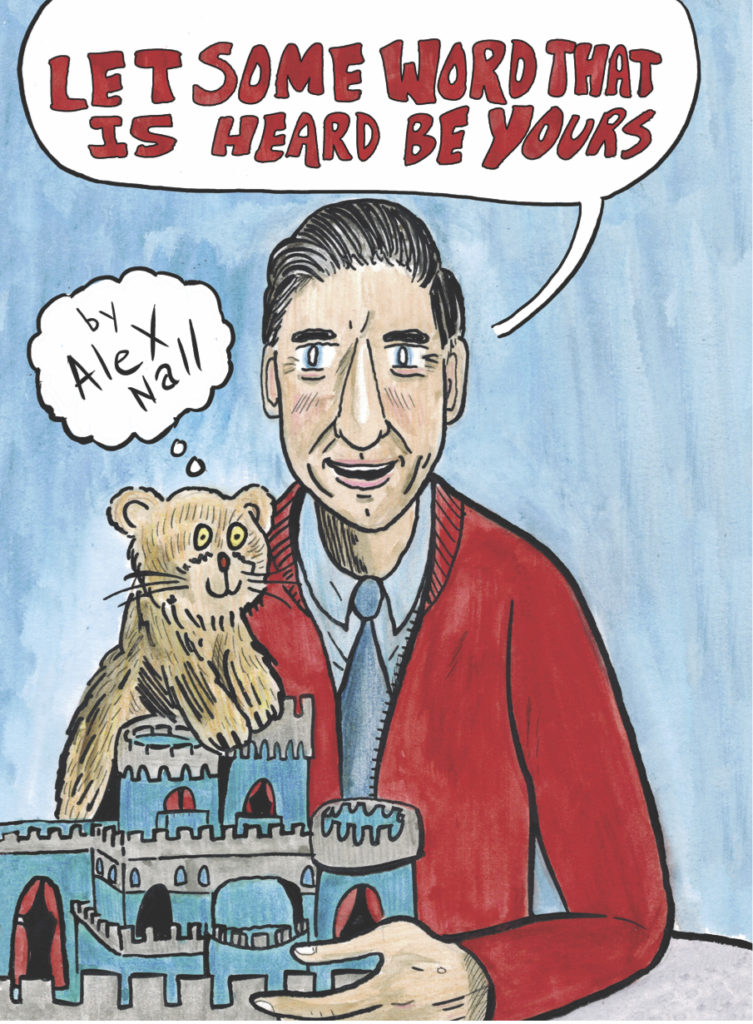 The day that I write this review, March 20th, 2018, marks the 90th anniversary of the birth of one of the kindest, most sincere, most genuinely good people this country — perhaps even this world — has ever produced. A man for whom the words “legend” and “icon” are, somehow, too small — even though he would no doubt balk at being referred to as either. A man with more genuine compassion and love in his heart than perhaps anyone we’ll ever see in the public sphere again. A man who cared for every child on the planet as if they were his own and who makes me want to believe that there really is a heaven for his soul to have ascended to after his death. I’m speaking, of course, of the singularly brilliant, compassionate, kind, and frankly beautiful (in the truest sense of the word) Fred Rogers, creator of the most important and empowering children’s television program of all time, Mister Rogers’ Neighborhood.

But you know what? Nothing I can say extolling the virtues of this as-near-to-flawless-as-we-may-ever-see human being can possibly compare to what Chicago-based cartoonist Alex Nall has to say about him in his newest book, Let Some Word That Is Heard Be Yours. We took a look at Nall’s superb Teaching Comics: Volume One last week, and in some ways this is a thematic follow-up or, if you will, “sequel” to that book, but even though this comic (I still hesitate to use the term “graphic novel,” even though it really does apply in this case) is shorter than the last (still, 80 pages is nothing to sneeze at) this is a considerably more ambitious work, telling one cohesive and self-contained narrative from start to finish rather than being an assemblage of single-page strips into a whole “story.” Suffice to say, though — if you picked up Teaching Comics on my recommendation and enjoyed it, you’re going to absolutely weep with joy while reading this. 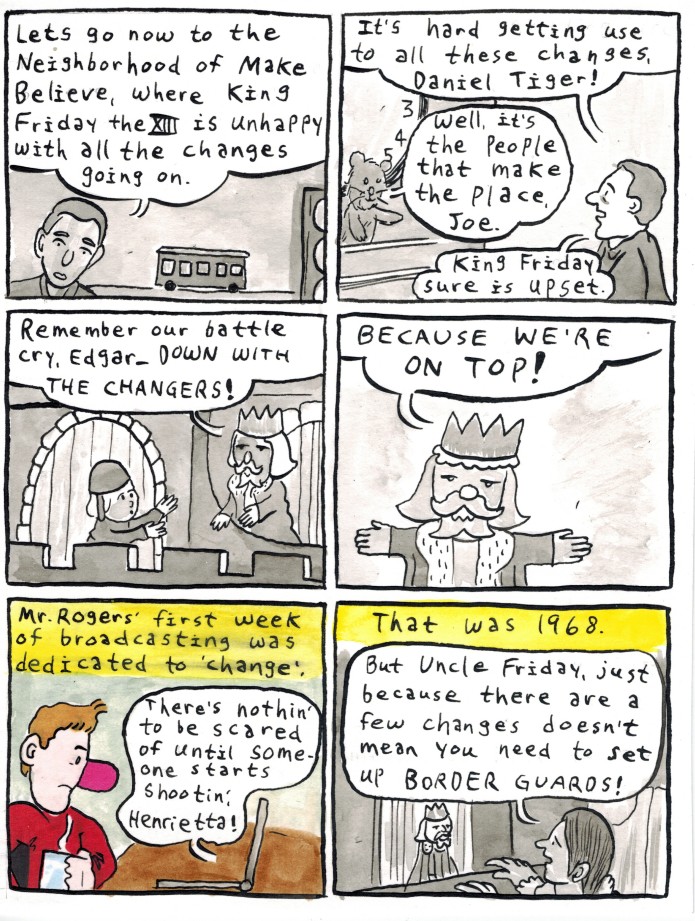 But what, exactly, is it? Well, on the one hand it’s exactly what it purports to be — a biography of Rogers’ extraordinary life. On the other, though, it’s something altogether larger and greater, in that it explores the motivations, the philosophy, the achievements and, perhaps most crucially, the influence of Rogers on the children who grew up watching him, as well as those who followed in his wake — not least of whom was Nall himself, who internalized so much of what his hero said and did, and has done his level best to impart his beliefs and teachings and temperament into his own career as an educator. So yes, while this is very much a book about Fred Rogers, it’s every bit as much about what Fred Rogers stood for and how his legacy endures to this day. 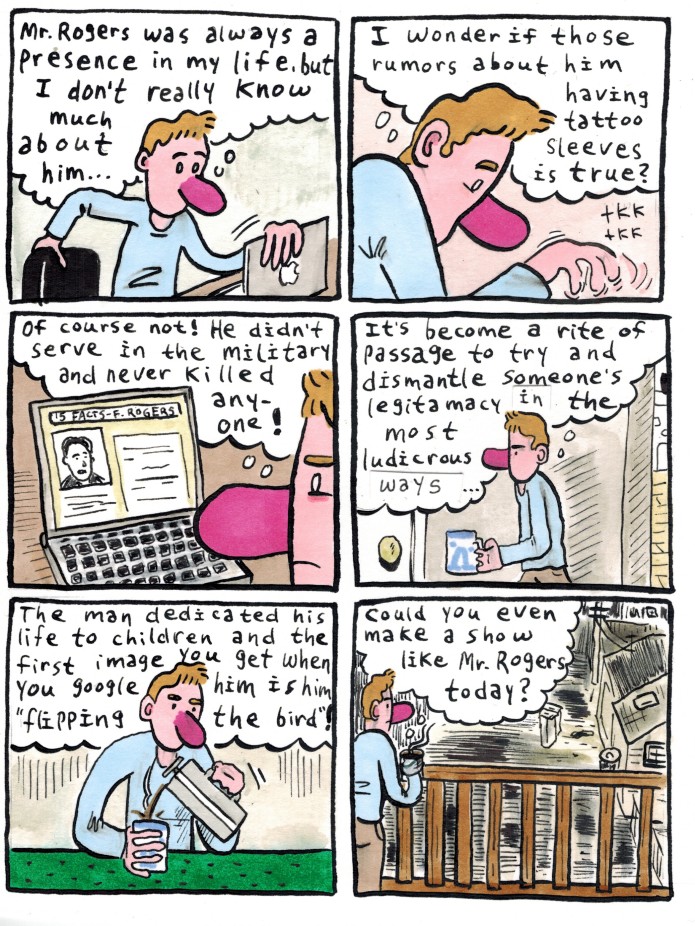 Nall’s cartooning is, as always, just gorgeous here — smart, heartfelt, emotive, and perfectly suited to its subject in that, like Rogers himself, his writing and illustrations eschew cynicism almost by their very nature. You know he means everything he says and draws here — right down to the smallest squiggly line. It’s earnest work, to be sure, but not the kind of annoying earnestness that can grate on the nerves. In fact, I would challenge even the most hardened and hateful “alt-right” internet troll to say that there is anything resembling “virtue-signaling” (a favorite buzzword of that crowd) on offer in these pages. Instead, what we are given is something so rare and precious that we almost don’t even recognize it when we see it anymore — pure and unbridled honesty. And that was what Rogers was, I think, all about at his core — giving children the tools to find, express, and celebrate their authentic and honest selves, and to know that they are loved for who they are. 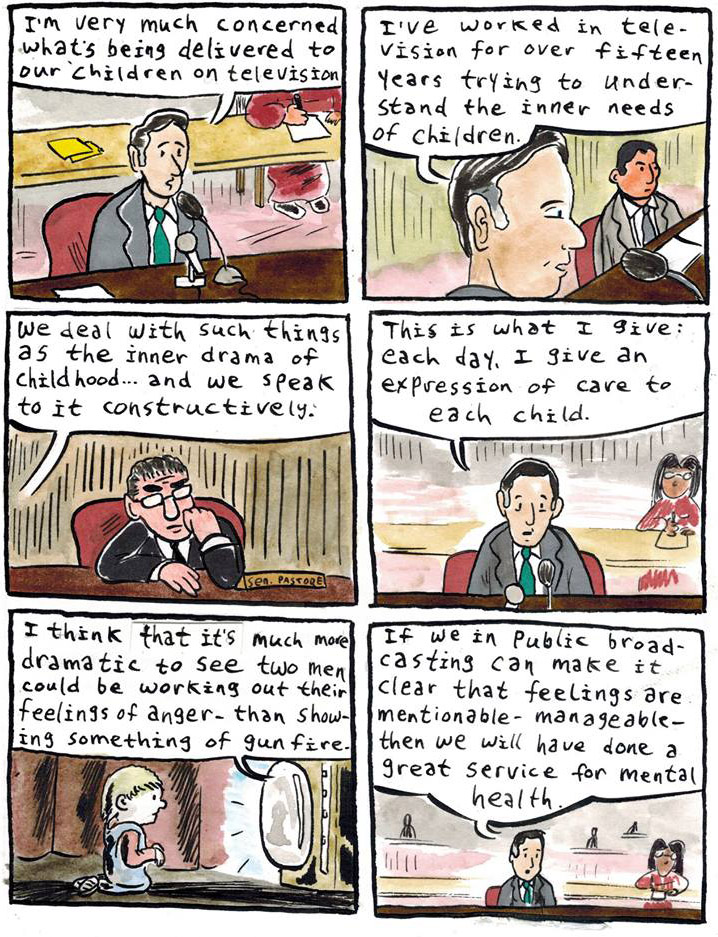 Of course, it’s impossible to divorce any work from the time period in which it is produced and in which one experiences it, so if you’ll forgive me a brief moment’s editorializing, I would say that we need this book — as well as the new documentary film, Won’t You Be My Neighbor? — more than ever. Not specifically because of Trump (although Rogers, for my money, represents the absolute antithesis to everything Trump is and represents), but because of the cynicism, despair, intolerance, social and economic insecurity, and outright nihilism that makes the rise of somebody like Trump possible. The society we have become may not deserve a Fred Rogers, but we need him more than ever — and while we may not have him among us anymore, thanks to Alex Nall we have the most succinct and intelligent and endearing and honorable portrayal of him, and everything he meant and still means, that we’re ever likely to have.  This is a book not just to read, to learn from, to admire, but to love. And love it you most assuredly will.

Let Some Word That Is Heard Be Yours is self-published and sells for only $12. That’s almost criminal under-pricing for work this brilliant. Order your copy now directly from the cartoonist here.