There’s a certain breed of film fan that gets roundly mocked on social media for their rather basic tastes: the Dudely Film Bro. We all know the (stereo)type. The man with the SCARFACE and BOONDOCK SAINTS posters on his wall. The one who worships at the altar of Tyler Durden, and lists Tarantino, Nolan and P.T. Anderson when asked what his favorite directors are on dating sites. He’s the Pumpkin Spice Latte of male film nerds, thinking his tastes make him sound more cine-literate than he already is. And UNDER THE SILVER LAKE feels exactly like a movie made for him.

Granted, that is a generalization and there are plenty of fine male film fans who can like those movies without coming off as complete jackholes (and plenty of women who like those films, too.) There will be plenty of fine people who’ll like UNDER THE SILVER LAKE, too, but that doesn’t stop the film from feeling like it was built to pander to that other audience: self-congratulatory, self-indulgent, shallow and punch-drunk on its director’s Easter Egg-centric cinema knowledge.

That director is David Robert Mitchell, who made the sublimely creepy indie-sensation freakout IT FOLLOWS and here seems to be making a bid to be canonized in the hall of great auteurs. This is *his* entry into the annals of shaggy, kaleidoscopic Hollywood noir stoner mysteries — *his* BIG LEBOWSKI, *his* INHERENT VICE, *his* LONG GOODBYE. The only problem is that he’s actually made his SOUTHLAND TALES, only without that film’s doomed cosmic sci-fi hooey. In other words, Mitchell has taken his knowledge of, and love for, classic noir and used it to make a blinkered, addled-hipster mess.

The film builds off a central missing persons mystery: what happened to aimless Silver Lake slacker Sam’s (Andrew Garfield) neighbor Sarah (Riley Keough)? They spent one glorious night together but when Sam goes to visit her the next day, she’s gone. Not just away from home, but entirely moved out, her furnishings gone. Who moves out in the middle of the night?

Sam sets off on a quest through Los Angeles to find her, but we can only ask ourselves: why? Because Mitchell needed to devise a half-baked mystery to build his stoned dorm-philosopher musings on. We know next to nothing about Sam, other than that he’s shiftless, jobless and behind on his rent to the point of eviction — and that, well, he’s a bit of creep. Sam spies on his neighbors with a pair of binoculars (namely Sarah and the topless old hippie lady in another apartment) and he makes it his life mission to follow and find a woman he barely even knows. He’s the stalker as moon-eyed romantic private-dick hero. Not that we get to know Sarah that much either; she’s an even bigger cipher than Sam, and, as written and played by a giggling kewpie-doll-sweet Keough, she comes across as Drew Barrymore imitating a femme fatale.

Sarah is hardly the only underwritten woman in UNDER THE SILVER LAKE. There are a lot of woman in the cast of SILVER LAKE, but they almost all exist to get naked, be in the background or throw themselves at our hero, and the film leers at them with a drooling male gaze salaciousness. Sam is presented as something of a sexual chick magnet dynamo, with seemingly every other woman throwing themselves at his feet, despite the fact that’s unkempt, badgering, drifting through life and reeking of skunk spray (there’s a running gag about his lingering odor.) Women trip over themselves to get   at him, yet there’s no sense of why– even as a layabout scenester audience stand-in, he’s not an appealing hero.

This is no slight to Garfield’s performance — he hits the right notes of dazed, quixotic  desire — but, as written, Sam is something of a shrill masculine fantasy. He’s the macho ladykiller noir hero reborn as a modern day paranoid hipster doofus. He’s the man Mitchell subconsciously wants to be — a loser, for sure, but one with such a mysterious magnetic pull that he can stand in for any Joe Schmoe in the audience who fancies themselves a mystery-solving ladies man. And that’s exactly what makes the film seem pre-built for those Film Twitter Bros. 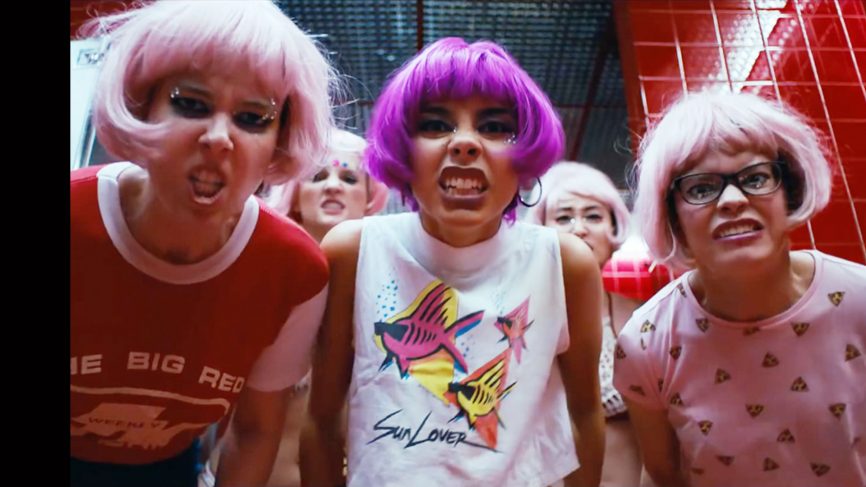 Mitchell’s ostentatious style, the kind of look-at-me show-offiness beloved by hip male directors, no doubt contributes, as well. To be fair, UNDER THE SILVER LAKE isn’t an awful film — just a messy one. The mystery doesn’t hold together — it’s an ungainly, stitched together thing– but maybe it isn’t supposed to; Mitchell has said this isn’t a puzzle to solve, but to let wash over you. But that wash has an onerous jagged edge. Mitchell is on his third film, and freed from the shackles of low budget filmmaking, he’s gone hog wild with ambition. There are some truly amazing scenes in UNDER THE SILVER LAKE, and at many times it almost feels like the film is finally going to come together, as if the messiness is going to transmute into something shambolically transcendent . (This is especially true on a sequence where Sam meets an ancient, God-like songwriter.) SILVER LAKE has some of the best individual scenes you’ll see in a movie all year, but they don’t form into something that hangs together as a compelling whole. The movie ambles and dawdles as it flits about various hipster art-reject enclaves, but it doesn’t tell a story so much as string together a series of indie-pop soundtrack selections and Mitchell’s movie-nerd references.

As the movie progresses, Sam is plunged further in the seedy underbelly of Hollywood, confronting hollow-eyed starlet escorts and smarmy pseudo-Bowie rock stars. Has there ever been a Hollywood that hasn’t been presented as seedy on screen? Is Mitchell is trying to say something about the vacant promises of Tinseltown? If he is, then he isn’t saying anything that hasn’t been said before. Ultimately, UNDER THE SILVER LAKE doesn’t really add up to anything much. It’s an exercise in male film buff wankery.