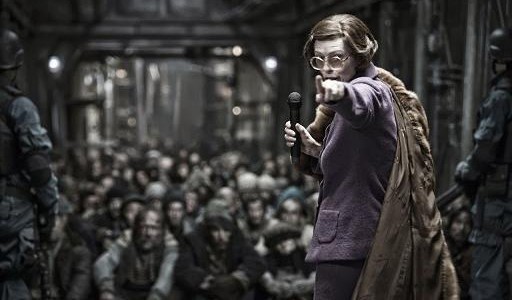 In a 1972 review of Luis Buñuel’s LE CHARME DISCRET DE LA BOURGEOISIE, film critic Stephen Kovacs described Buñuel’s fascination of juxtaposing the everyday with the fantastic. “Bourgeois life,” he writes, “is characterized by the exaggerated celebration of fundamental human activities.” Although Kovacs meant this passage to explain the characters’ repeated attempts to sit down for dinner while being interrupted by the bizarre, this description also shows why the elements of surrealism surrounding the bourgeoisie are so easily adapted to post-apocalyptic cinema. There is no such thing as a fundamental human activity in a world wracked by ecological or man-made disasters; any basic function – such as procreation or eating – must begin with safety and conservation of resources above all else. Any activity that occurs with an eye towards form as well as function opens the door for commentary on the haves and the have-nots. 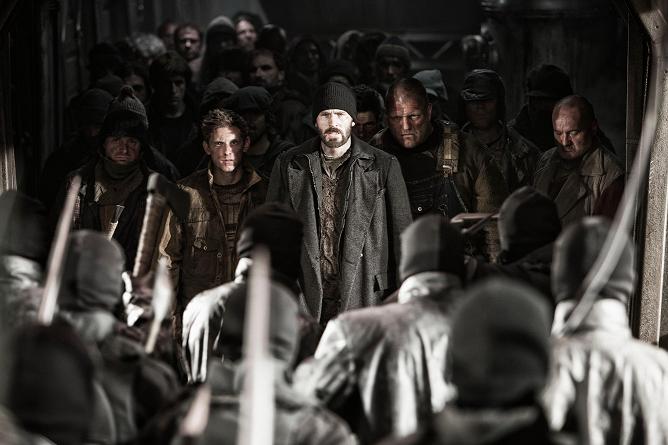 This portrayal of the post-apocalyptic bourgeoisie has long been one of the most appealing aspects of the genre. Be it the dark ‘50s utopia of Downunder in A BOY AND HIS DOG or The Duke’s lavish theatre in ESCAPE FROM NEW YORK, filmmakers use disaster’s middle class as an important departure from the monotone existence of the destitute. In A BOY AND HIS DOG, for example, the bright colors of Downunder provide a much-needed change of pace from the grimy visuals of the surface world. This aesthetic change is complimented by the mundane activities of Downunder’s citizens. Whereas most people in an atomic wasteland would consider the enforcement of law and order to be an extravagance, in Downunder, the execution of capital punishment is delivered by rote. The banality of these activities – or the “exaggerated celebration of fundamental human activities” – stands in stark opposition to the struggle for survival of the titular boy and his dog. 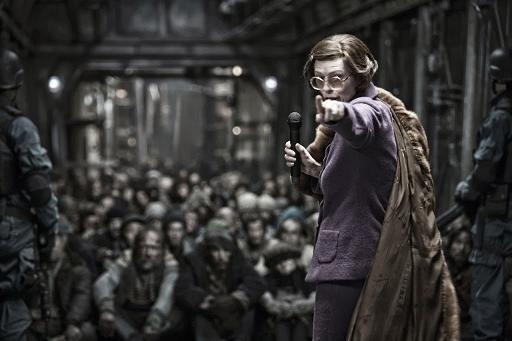 Sadly, as the post-apocalyptic film has increased in popularity, the inclusion of the bourgeoisie has fallen out of favor. Part of this can be attributed to the shifting political landscape of the country. The middle class of America has mostly disappeared; a 2014 poll by Pew Research Center noted that Americans are increasingly viewing themselves as belonging to the lower or lower-middle class. This can also be consider part of a trend in blockbuster filmmaking towards the destruction of planet earth. As talented actors and filmmakers are increasingly drawn to big-budgeted films, the scale of these films has been elevated to match the investment in talent. Why save a single city when you can save the entire eastern seaboard? 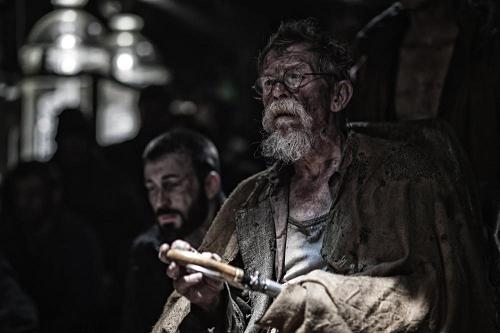 This march towards total annihilation has seeped into the realm of post-apocalyptic fiction as well. Disease and technological disruption have been replaced by the threat of a zombie invasion that will wipe out what remains of humanity. Whereas past post-apocalyptic films would focus their attention on the dynamic between survivors, building pockets of a surreal middle-class around the petty dictators who rise to power, many of the newer release are simply disaster films in disguise. An apocalypse is still an apocalypse, even if the population of the planet is measured in the millions instead of the billions; the main storyline is focused more on thwarting disaster than exploring the class divides. 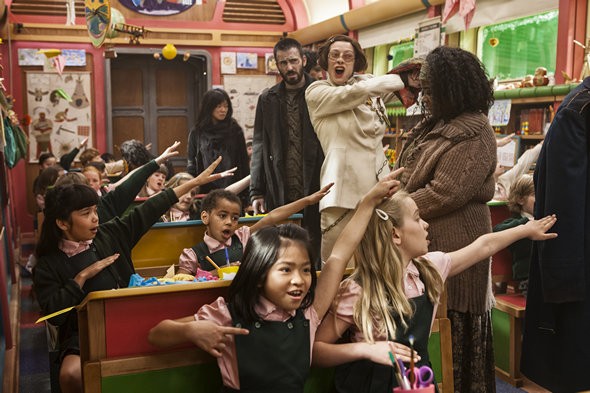 And here is where Joon-ho Bong’s SNOWPIERCER makes its mark. Rather than focus exclusively on the aversion of yet-another global disaster, Bong sets his film up as an act of class warfare where the realism of the train’s rear and the surrealism of the train’s front are in constant conflict. Bong has little interest in taking the minimalist approach to his future. Much like his last international blockbuster – the 2006 creature-feature THE HOST – the director takes all of his favorite toys, throws them against a wall, and rolls hours of footage as they clatter to the ground. As such, SNOWPIERCER is structured around the characters and train cars that offer the most entertainment. We may spend ten or fifteen minutes in a single car with Chris Evans’s Curtis before skipping through the next three altogether; the amount of time a character spends onscreen is proportionate to the scenery they can chew. 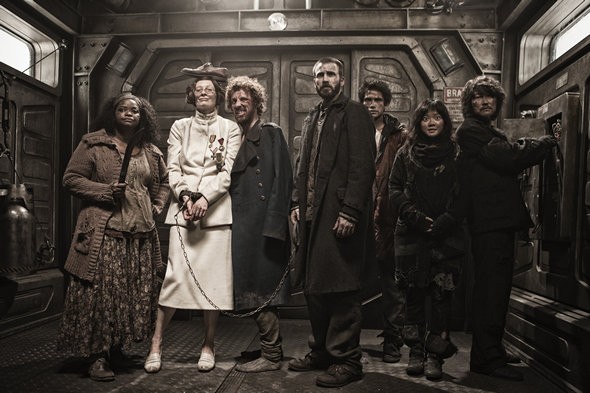 And caught – figuratively and literally – between the poor and the rich is the train’s expansive middle class. The passengers in the center of Snowpiercer are able to go through the motions of a civilized society that, when contrast against the struggle of the back of the train, provide the surrealist tone that has been missing of late in post-apocalyptic fiction. Bong’s characters mimic the urbane absurdity of Buñuel, alongside more contemporary filmmakers such as Terry Gilliam or Jean-Pierre Jeunet. Take the central character of Mason, played by Tilda Swinton. Mason is the face of the train’s bourgeoisie. She knows that she is not in a position of ultimate power on Snowpiercer; that honor lies with Wilford and Wilford alone. However, she is far enough removed from the daily grind that her mannerisms appear grotesque in the eyes of Curtis and his men. 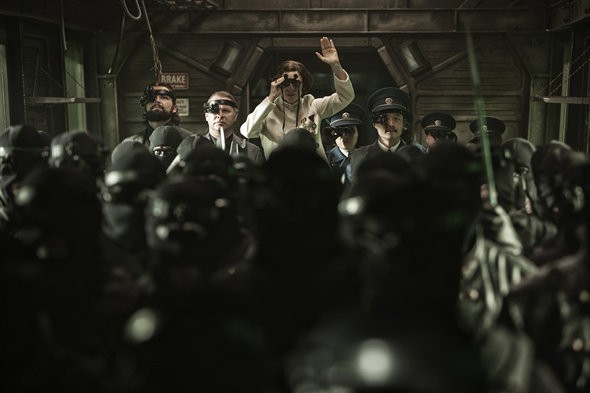 During one such scene, Mason’s bodyguards call a halt to a bloody brawl between the two factions in the first windowed car of the train. Each of Mason’s men – even those bleeding to death on the ground – pause to celebrate the passage of a new year on Snowpiercer. When Mason resumes her diatribe to the crowd, her anger comes not from the loss of life on both sides but the lack of respect showed to one of the train’s finest holidays. Later we are exposed to Snowpiercer’s solitary classroom, where a bubbly teacher played by Allison Pill extols the virtue of Wilford’s mechanical miracle and indoctrinates a new generation of children on the virtues of following the rules. As the children chant the outcome of disobedience – they will all be horribly killed on the outside of the train – Mason beams with pride at the next generation. This ritualized transfer of knowledge in its exaggerated form again accentuates SNOWPIERCER’s dedication to its bourgeoisie class. 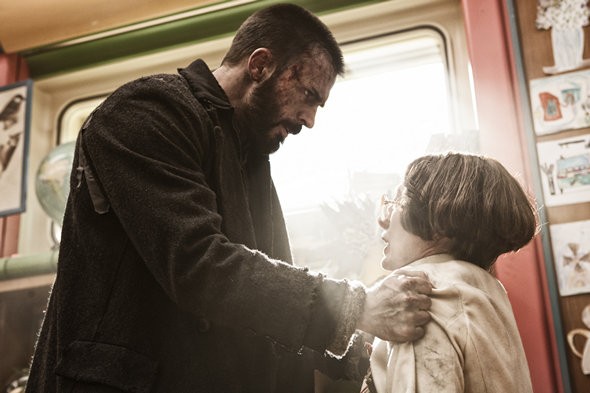 And it is to the director’s credit that he is ultimately able to balance two wildly disparate tones without losing overall cohesion. Fans of the graphic violence of Asian films will not leave SNOWPIERCER unsatisfied, nor will fans of dark comedies such as DELICATESSEN and the aforementioned A BOY AND HIS DOG. Many reviews of SNOWPIERCER are label it as either a masterpiece or one of the best films of the year; regardless of its broader claims to greatness, it serves as a revitalization of a genre in need of a fresh take. With remakes of ESCAPE FROM NEW YORK and MAD MAX appearing in the not-too distance future, it is my hope that these filmmakers won’t shy away from the surrealistic tone of films like SNOWPIERCER. The charm in the post-apocalyptic bourgeoisie may not be so discrete after all.