The mass shooting at Columbine High School on April 20, 1999 shocked and horrified the people of the United States. Promises were made to stop it from ever happening again, to keep our kids safe. In the time since that horrible day, there have been more than 230 school shootings in the U.S., not including colleges and universities.

Dozens of filmmakers have attempted to create art out of these tragedies, ranging in levels of taste from arthouse fare like Gus Van Sant’s ELEPHANT (2003) to the salacious first season of AMERICAN HORROR STORY. The problem in almost every film about school shootings is that they focus on the shooter. While that might be the easier narrative decision, it’s a less impactful one, and one that doesn’t really mean much of anything. Why are we focusing on the people who chose to hurt others, instead of the ones who were hurt? 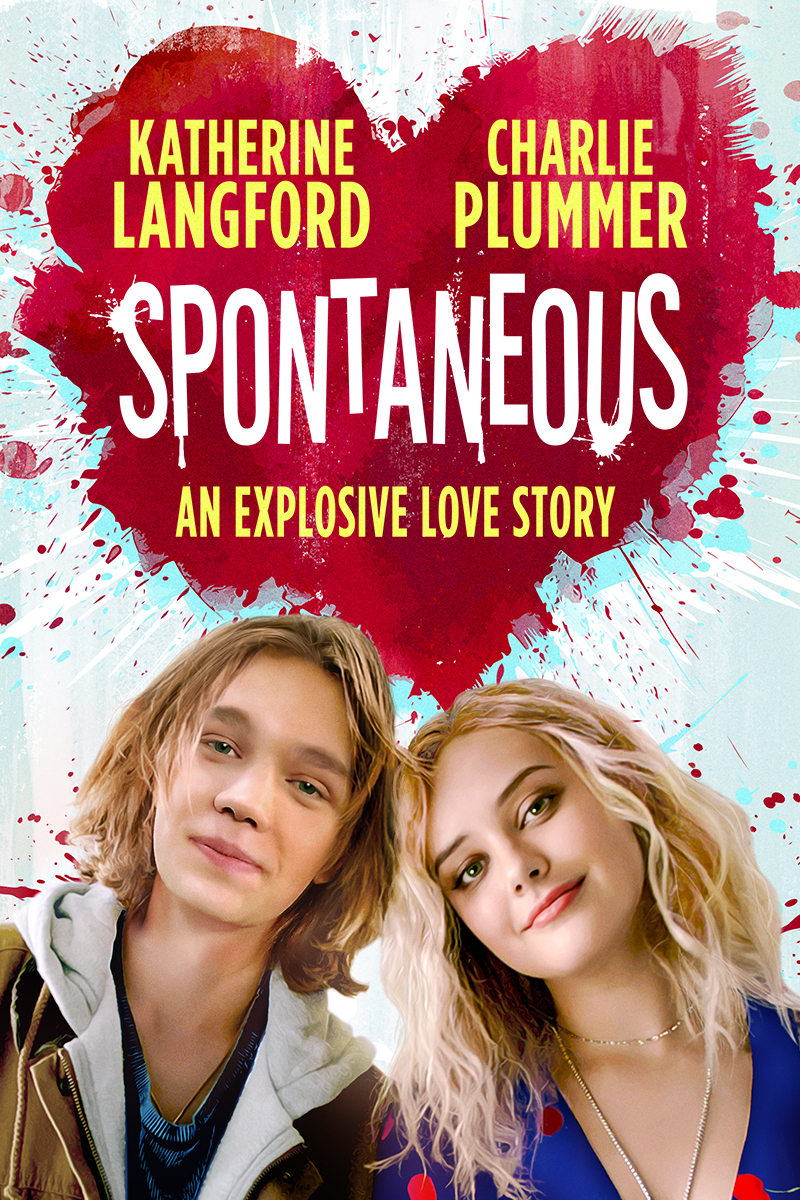 SPONTANEOUS, now streaming, deals with the human effects of surviving this kind of trauma without ever actually involving guns or discussions about bullying or mental health. There is no shooter – instead, the senior class at a suburban high school begin spontaneously combusting one by one. There’s plenty of blood and violence, but it’s random, as violence so often feels in reality. The first few combustions are played for shock and humor, and it’s executed brilliantly. 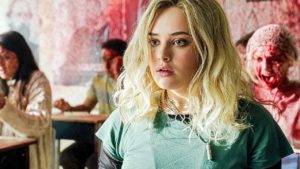 Rebellious, fun-loving Mara (Katherine Langford) is just sitting in class when the student in front of her suddenly explodes in a bright red blast of viscera. Mara talks about who the student was, via voiceover, and we get a brief montage of her life before “the pop.” The film cleverly uses school photos as a way to force us to stare into the eyes of these victims and relate to them on a human level. Mara talks about the students the way any of us might remember our classmates, and it’s heart-wrenching to think about that kind of loss in a less fantastical context.

After the first explosion, Mara falls into a budding romance with Dylan (Charlie Plummer). Dylan had a crush on Mara but thought approaching her was pointless because they were going off to college. The possible threat of exploding at any moment made him decide to seize the day — to reach out to the girl who gave him butterflies. They fall in love, and their romance is intensified by the near-constant trauma they’re both put through. Their first kiss is interrupted by a student combusting; Dylan jokes that he’s worried about “exploding all over you” during their first sexual encounter. Even in their happiest moments, the shadow of the explosions lingers over them.

There are several opportunities for SPONTANEOUS to lean too far into its allegory, to turn to you with a wink and a nod. It doesn’t, instead opting for smaller moments to sell its point. After the funeral for the first victim, Mara watches as the girl’s father scratches her stick-figure sticker off the back of their SUV. She’s shaken by what she sees and brings it up to her friends later, though she makes a little joke of her musings about what happens when people die. Mara jokes about everything, using her humor to deflect from her pain.

There’s a turning point in the film where the humor starts to fade and the reality of the horror sets in. An extended sequence in which multiple students begin combusting at once is reminiscent of its school-shooting film contemporaries in execution, but feels so much more impactful because we’ve gotten to know these characters. They’re not faceless victims or one-note stereotypes, but fully fleshed-out young people who’ve had their lives cut short. After a point, Mara is so afraid of being afraid all the time that she basically decides to stop living. She drinks to excess and stumbles through her existence, waiting to die. It’s an all-too-common story about the effects of trauma, and it’s easy to identify with her agony. Her sardonic humor is pitch-perfect and feels accurate to adolescence – in fact, the dialogue and humor in general feels authentic. These teenagers don’t speak in made-up lingo or with more complicated vocabularies: they speak like teenagers. 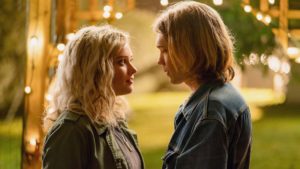 Many films that focus on the lives and struggles of adolescents make the adults an enemy or threat, but SPONTANEOUS wisely explores the relationship between the generations with more nuance. Mara’s parents are “cool parents” who swear and smoke weed and talk to her like an adult. Dylan’s mom helps Mara overcome her grief by telling her a story about a man who was swallowed up in a sinkhole. One of Mara’s teachers is completely real with the teens: “I’m not gonna tell you everything’s gonna be okay, because that’s bullshit. I am gonna help you graduate.”

That’s the big goal in the film – graduation. After ruling out other possibilities for the explosions, including drugs and mental health issues, they realize it’s just… random. You could go to home room and end up a puddle of blood and guts, or you could be just fine. It’s such a perfect allegory because these violent acts have begun to feel so random. It’s all chaos.

Chaos, and our response to it, ends up being the driving focus of SPONTANEOUS, and it’s all the better for it. The more challenging issues facing us with gun violence are alluded to, and a sequence in which an FBI agent tells the students that they have his thoughts and prayers is almost too on-the-nose. Thankfully, because of the genius use of allegory instead of showing us yet another scene of a young white man terrorizing a campus, it all works. 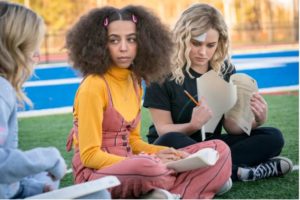 It’s been a long time since I was in high school, and I can’t imagine the fear that today’s kids and parents live through. Sometimes the reality is too horrifying to deal with head-on, and that’s why SPONTANEOUS manages to be nearly perfect. It forces us to reckon with the aftermath of violence and ask why without ever humanizing the violence, the unknown destructive entity that could so easily be another kid in your class.

When Mara comes home after the first explosion, her parents tell her that they’re relieved it wasn’t a shooting. They thought she was hurt or dead, and they didn’t know. “We’re so glad you’re okay, and that your classmates are just regular assholes and not evil,” they tell her.

Highlighting these “regular assholes” and their struggle to survive senior year makes SPONTANEOUS the most human movie about an inhuman topic, and one everyone should watch. 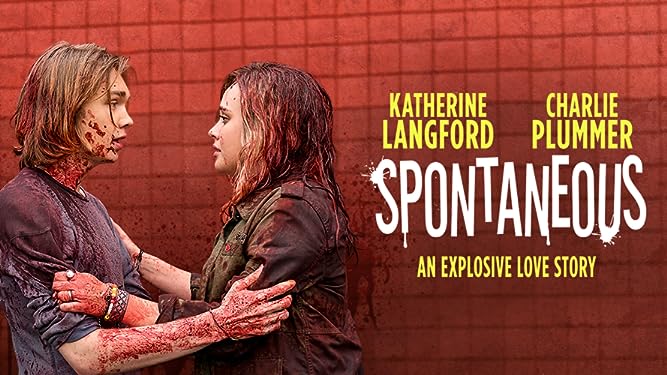 SPONTANEOUS is available to stream in the US on Hulu and Amazon Prime! 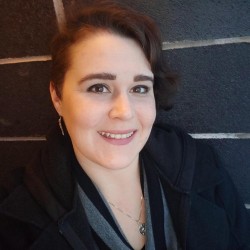