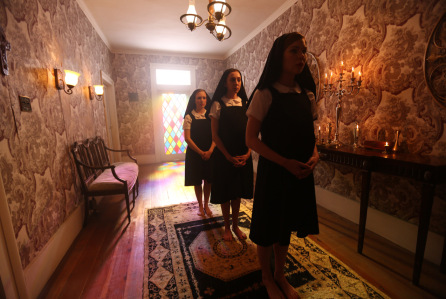 Religion always held an inherently creepy vibe for me. Maybe it’s imagery, maybe it’s the repression, but there’s just something unnerving about it and I wasn’t even raised Catholic. ST. AGATHA from director Darren Lynn Bousman is a perverse, creepy, and slickly shot slice of modern day nunsploitation.

Set in the late ‘50s—a golden age of repression–the film follows Mary (Sabina Kern), a young woman from a broken home with an abusive father. The only reason she stays is to care for her little brother William. When William is killed in an accident, she runs away with her grifter boyfriend Jimmy (Justin Miles) and becomes pregnant. The two are unable to make ends meet and Mary checks herself into a mysterious convent for women who cannot take care of themselves. Of course, everything is not what it seems. There’s some evil a happening.

ST. AGATHA slickly reveals its story through flashbacks. It feels like a slow burn at times but smartly keeps the audience engaged with plenty of scares and three terrific gross out moments along the way. It’s a really great looking film as well. So much modern horror is shot in dour blues and greys or over saturated neon (a look I happen to love), ST. AGATHA splits the difference with Bousman and director of photography Joseph White giving the film a real sharp visual style. Exteriors are reminiscent of ‘70s British horror productions and the interiors drenched in orange teal, giving the film an almost comic book quality. Yeah, the orange and teal color scheme can be obvious and overused, but that’s because it works.

The stand out performance of the film comes from Carolyn Hennessy, the Mother Superior and leader of the cabal of creepy nuns. Hennessy brings a perverse sexiness to the role, with a subtlety evil demeanor that explodes outright vicious moments. She’s a wonderful villain in a performance that would Louise Fletcher proud. She plays the role with such gleeful gusto, it’s hard to take your eyes off her. Mark Sayfritz’s overpowering score cribs from Goldsmith’s OMEN and just works perfectly with the tone and style of the film. The film features themes of the cynicism and hypocrisy of religion, repression but never wallops the audience over the head with it.

Loaded with creepy imagery, vicious nuns, and over the top gore moments, ST. AGATHA hits all the right marks and delivers some very good scares along the way.