Stephen King has always provided essential reading—and with the adaptations of his stories to screen—essential viewing in horror. He’s scared the shit out of you with killer prom queens, a ’57 Plymouth Fury, and haunted hotels, but he’s most effective when digging deep into psychological terror. It isn’t the fact that Carrie burned her school to the ground, but rather what drove her to it that gets under one’s skin. What’s even worse is that she heads home to sanctuary only to have her crazy religious mother try to kill her too. Louis Creed once thought he was starting a new life with his family in Maine, but their new home only drives them to desperation to cling onto those they love no matter the cost. There’s no happy ending in many of these stories, but King allows fans to think about what they just saw. In 2017, writer-director Frank Darabont brought to life King’s novella about the monsters that lie within all of us when all hope is gone.

The novella and film revolve around members of a small Maine town (where else?) that find themselves stuck in a supermarket when a mist rolls in. They quickly learn that they can’t drive through it due to lack of perception and that the mist itself is carrying Lovecraftian-like monsters thirsty for their flesh. All the characters react differently, including a religious zealot who manages to convince some of them that this is Armageddon. 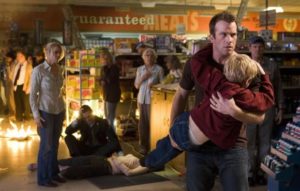 A couple soldiers stuck there kill themselves and it is discovered that the government was performing experiments that opened doorways into other dimensions which resulted in the mist. David (Thomas Jane) leaves the supermarket in car with his son and a few others in hopes of finding something safer than there. He stops by home first and learns his wife is dead and heads back out onto the road. They witness a giant monster, promising that they’ve only seen minimal of what is out there. The car runs out of gas and he shoots them all dead to save them from a worse death outside the car. He screams as there aren’t enough bullets for him to die and just killed his little boy. David steps out of the car and welcomes himself to be taken, only to find out if he only had waited that help was on its way and his loved ones would have been rescued.

I remember watching this and thinking “this is so fucked…”

And I loved it. 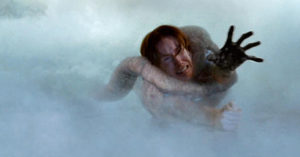 Yes, I might have been depressed and wanted the world to end, but it’s rare in mainstream cinema to witness an ending so emotionally horrific. The marketing of THE MIST promised a monster movie—which it does deliver on—but the underlying themes took viewers aback and audiences arguably weren’t prepared to leave the theater actually still thinking about the movie. One of the best creative choices the story makes is keeping it enclosed. We have no idea what’s going on outside of our central characters and are completely in the dark as to what’s going on with the rest of the world. Is everyone getting engulfed by the mist or just this town? Also, does anyone else know what’s happening here? Is help even coming? All these concerns make the ending all the more shocking.

The hardcore King fans took the most notice and were probably curious when the film was announced as the novella’s ending is far different. In the original story, David does leave with others but is left ambiguous as they find shelter and prepare to keep moving with a sense of hope. Therein lies the biggest difference between the novella and the film: the town is the concept of hope. The original story still lets us feel that little bit of it even if we’re not sure David and them will survive, but at least it’s there. In Darabont’s take, that sense of hope is lost. It doesn’t even matter if David survives because what does he now have to live for? His actions are understandable as he merely was protecting them from something far worse, but some prefer that life takes its course. 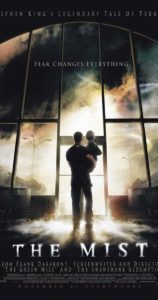 Earlier in the film, a woman is concerned about the children she left at home so she could pick up groceries and everyone thinks she’s a fool to go back into the mist. She does leave and it is presumed that she is killed. However, David notices her being saved by the US Army in the end as she holds onto two children. There’s plenty of “if only” type moments, but that’s the reality of survival. THE MIST may carry its hands full of CGI monsters, but it’s the most real and raw version I’ve ever seen of what’s out there  and coming and get us.