Sure, I get it; starting your movie out with a beautiful, topless, girl covered in blood, running out of a spooky house, screaming, “What the fuck” is supposed to grab the audience’s attention. For me, it set the bar low for WTF!, and it was already set pretty damn low. There’s a little blood, a little gore and then that’s the end of the opening sequence. Meh. Quick cut to a spring break pool party, and I already decide that I want to see everyone in this die! Why can’t this be the pool party from NIGHTMARE ON ELM STREET 2: FREDDY’S REVENGE, where we got to see so man young useless fucks die. Instead we get to hear these young people whom I’m not sure are supposed to be teenagers or college kids (some of them look like they are in their late 30’s), droll on in glib conversation that doesn’t seem scripted and is laden heavy with profanity. If this was in the script, I feel sorry for the cast. The only redeeming part of the pool party scene is seeing flamboyantly gay blogger Perez Hilton have a cameo as the preppie jock douche bag Donnie. His cameo literally made me laugh out loud.

During the pool party, we’re introduced to our core group of jagoff characters. There’s Bonnie (Andrea hunt) and Lisa (Sarah Agor) who are both slutty, stuck up rich girls, Sam (Johnny James Fiore) and Bevan (Adam Foster) who are over-privileged, misogynist, dude bros, and every horrible slasher movie needs at least one stoner and ours would be Jacob (Benjamin Norris). Oh, don’t forget Rachel (Callie Ott) and her brother Toby (Nicholas James Reilly) They are the only two half way likable characters and survivors of the opening sequence’s massacre. Wait, why would these two ever be invited to his party?

Jacob has a wild idea, why not have a crazy party at his dead Uncle’s cabin in he woods!?!?! Oh, and cell phones don’t work out there. Will the clichés ever end? I think all the characters realize that a cabin in the woods is a bad idea, but they still go along with it. On the way there, a creepy old townie tells the group not to go. I’ve said this before and I’ll say it again, if a creepy old guy says don’t go, then don’t fucking go!

Half an hour into WTF! And I’m bored. Bring on the killing already! How long can we watch young, good looking people be complete assholes to each other without going insane.  Trying to settle in, the boys start playing a MORTAL KOMBAT style video game, and it triggers Rachel’s violent memories. Girl, if a video game triggers you, then you need to get the hell out of there. Luckily she has her brother Toby to comfort her. Toby is the only decent male character in the film, and he’s gay. WTF! gets points for having a strong, non-stereotypical gay character.

Between the disposable characters and the mansion, I mean cabin in the woods, a lot of WTF! reminds me of 2009 remake of FRIDAY THE 13TH. At nearly the 45 minute mark, things finally start to get interesting. We finally got someone with their throat slashed! Suddenly, phones don’t work and cars don’t work, everything is so by the numbers it hurts. The killer is finally dispatching these pukes at a decent rate and I’m cheering for him/her. There is some great gore. I always love a penis decapitation, and burning off Bonnie’s face is pretty rad. I feel like the biggest idiot in the world for not seeing the done to death twist ending coming. It’s been done a million times and it will probably be done a million times more. If any part of WTF! sounds interesting to you, do yourself a favor and go see 2015’s SUSPENSION. They are very similar films in premise, only SUSPENSION has a far superior script, direction, acting, and pretty much everything else. WTF!, it’s more like C&P (copy and paste). 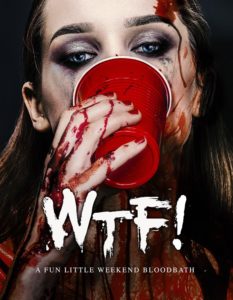