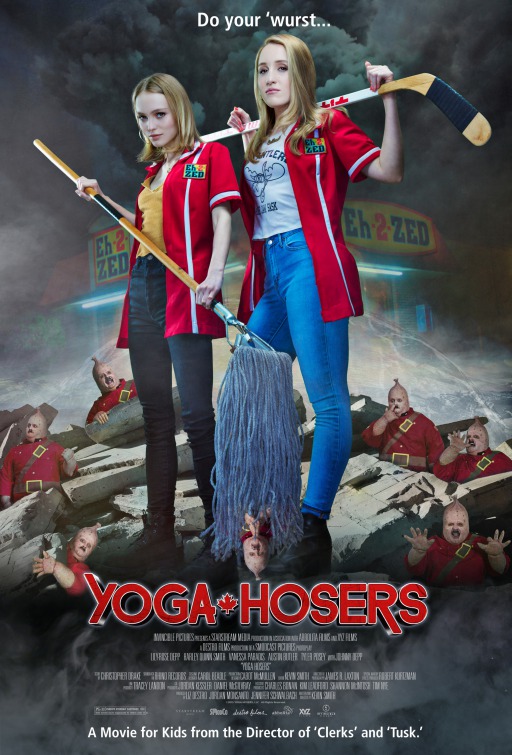 I know that there is something mentally wrong with me, because if everyone is raving about something I automatically dismiss it. I’ve never seen TERMINATOR 2: JUDGEMENT DAY, JURASSIC PARK, or THE HATEFUL 8, but I could probably recite every line of HOWARD THE DUCK or GARBAGE PAIL KIDS: THE MOVIE. My taste level is questionable at best. I’ve never studied film, I just know what it is I like. Director Kevin Smith’s 2nd entry into his True North trilogy, YOGA HOSERS, plays exactly how his first one, TUSK should have…campy, silly, and over the top fun!
The two main characters, Colleen Collette (Lily-Rose Depp) and Colleen McKenzie (Harley Quinn Smith) are a great amalgamation of personalities that we’ve seen in classic cult films ranging from BILL AND TED’S EXCELLENT ADVENTURE, HEATHERS, CLERKS, and even more modern films like #HORROR. The texting, the slang, the social media obsession that the girls carry on with is relevant, but at the same time carries a familiarity seen in Kevin Smith’s earlier teen comedies. The characters also have a distinct 1980s John Hughes vibe. They work in a convenience store called “Eh to Zed” and practice with their rock band in the back room. Just a couple of teenage girls being teenage girls.
In their spare time, the Colleens study yoga, hence the name of the movie. The yoga scenes are a laugh riot, and really take the piss out of the new age scene. Some of the schtick is obviously improvised, which just adds to the comedy. Justin Long hams it up with glee as their yoga instructor Yogi Bayer. Really the entire cast is amazing! I couldn’t be happier seeing Tony Hale playing Colleen Collette’s father, and Natasha Lyonne (one of my personal favorites) as his live-in girlfriend Tabitha.
Bodies start piling up. Typical expendable victims getting drilled through from their butts to their mouths. If you hear something chasing you in the woods, run! Don’t just stand there asking, “Who’s there?” All fingers point to the Colleens. Who could solve this dastardly crime? Of course, super-sleuth detective extraordinaire Guy Lapointe (Johnny Depp). I didn’t care much for the character of Guy Lapointe in TUSK, but I am glad Kevin Smith has carried him over to YOGA HOSERS. Johnny Depp’s over-acting and campy performance seems to fit this film perfectly.
Besides the continual references to social media, YOGA HOSERS feels much more like something Charles Band would have produced in the height of Full Moon Films. Everything from the well-done musical montage, to the parents-going-away-for-the-weekend plot device, to dumbass teenagers partying where they shouldn’t. It all brought me back to the golden age of VHS and video rental stores. I mean, who doesn’t love heavy metal Satanists? Kevin Smith’s script is laugh-out-loud funny — this is totally his MEAN GIRLS movie.
The girls explain that it’s not them who is killing everybody, but it’s mini-sausage, Nazi monsters that live under that store, appropriately called “Bratzis.” Oh my friggin’ goodness! The Bratzis are a dream come true for me. They are so absurd that they are amazing! I love the camera shots from their perspective. The point-of-view shots brought to mind similar camera techniques used in the PUPPET MASTER franchise. The German the Bratzis speak in the film was the equivalent to the Arabic spoken by the terrorists in TEAM AMERICA: WORLD POLICE. Just a couple simple words repeated to communicate. All around, really hilarious stuff.
In the third act, YOGA HOSERS quickly descends from absurdity to an extreme level of ludicrous film making you rarely see. The climax involves a giant GWAR-type character that you might see in the classic Sega game SPLATTERHOUSE and a video game battle a la SCOTT PILGRIM VS. THE WORLD.
I’m gonna go on record as saying that if you don’t like YOGA HOSERS, then you’re probably a pretentious movie critic nerd that needs to loosen up and have some fun. There are some great cameos including Stan Lee, Jason Mewes, and director Kevin Smith, and the pop punk soundtrack just adds to the silliness of the film. The CGI effects were horrible, and I would have liked to have seen some more gore, but other than that I really dug this movie. YOGA HOSERS is for fans of movies with ridiculous mini-monsters in them, like ARMY OF DARKNESS, GHOULIES, and THE GATE.
RECOMMENDED! 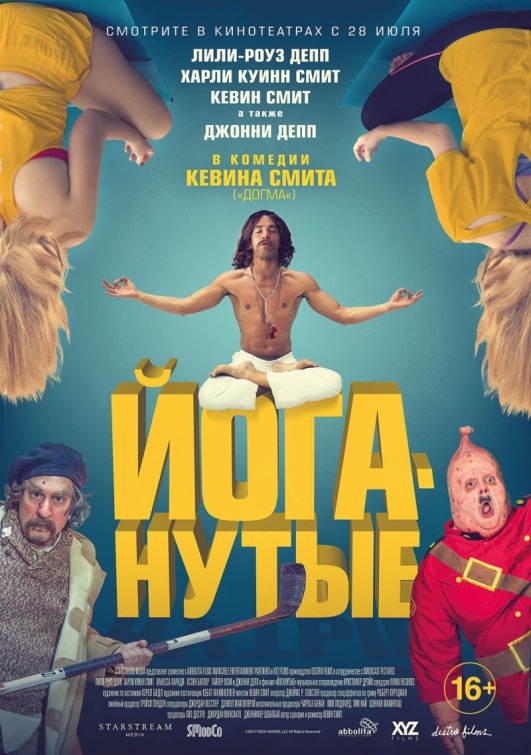