I love genre cinema. I will always have a soft spot for horror, action, sci-fi, and all the subgenres that exist inside those larger categories. What I have never felt any real connection to are those films that exist in the realm of pure sleaze. You know the ones: the films from the ’70s and ’80s, filled with ugly violence and sex that is the opposite of titillating, usually shot on cheap film stock with semi-amateur casts. But knowing these films have a large following and several companies devoted to restoring them makes me wonder what I am missing. With that in mind, I am going to do a deep dive into the world of sleazy exploitation. This is My Exploitation Education. This week’s entry is STRIPPED TO KILL.

There is clearly a war going on between co-writer/director Katt Shea (billed as Katt Shea Ruben) and producer Roger Corman about what type of movie STRIPPED TO KILL is. You can practically hear Shea arguing for an empathetic portrait of what it takes to be an exotic dancer and how it can be turned into an empowering experience for the women on stage. At the same time, you can imagine Corman sighing and explaining that the movie is called STRIPPED TO KILL; just film some women taking their clothes off and have a few of them get slashed by a maniac. Neither Shea nor Corman seem to win their respective arguments, but weirdly, the movie actually seems to come out ahead because of its awkward mixture of exploitation sleaze and melodramatic workplace dramedy.

When undercover police officer Cody Sheehan (Kay Lenz) is unable to stop the brutal murder of a woman she literally stumbles over, she becomes obsessed with catching the killer. To get info from the paranoid dancers who don’t trust cops, Cody goes undercover as a dancer at the strip club where the murdered woman worked. The film then bounces back and forth between her investigation alongside Heineman (Greg Evigan), her loutish partner, and her time learning to appreciate the skills the dancers have and becoming addicted to the thrill of being on stage. 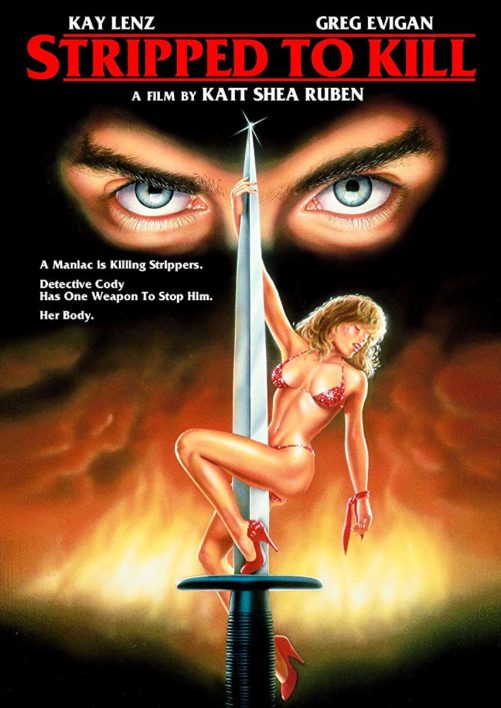 That is not to say that the film is actually good—at least not in any traditional sense. The screenplay is ham-fisted with perfunctory dialogue and clichéd characters. Despite giving lip service to the power that the dancers hold over the men who watch them, they are portrayed as a group of stereotypically “damaged” women (drug addicts, ditzy blondes, tragic tales of giving up babies for adoption and growing up as street hustlers) with no better job opportunities.

The men in the film fare no better. Despite Norman Fell trying to give a little shading to his stock strip club owner role, he is still a cigar-chomping sleaze bag who is quick with an insult and a pink slip. In a better film, Heineman would be unmasked as the fragile, egotistical/borderline toxic masculinity asshole he clearly is. But the film coming out in 1987 as it did, his sneering condescension toward the dancers and Cody’s sudden love for the stage is presented merely as a masking of the fact that he’s actually in love with her and doesn’t know how to express it. 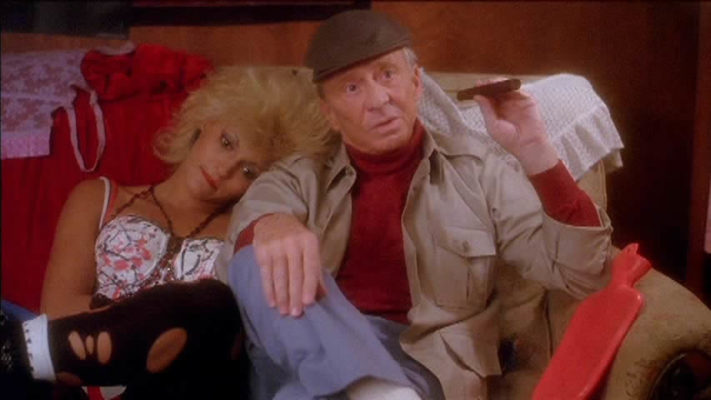 Lenz almost single-handedly pulls STRIPPED TO KILL out of the fire (if you’ve seen the film, pun intended). Her ability to balance the tomboy cop persona that she starts with (and successfully retains for the whole film) with the softening toward the other dancers and Heineman that Cody goes through is given believability through her likable, open performance. She nicely balances the hardboiled cop out to get her man with some impressive comedic chops that sells the more ridiculous plot twists the film provides.

Even with Lenz doing all she can to make something worthwhile out of the nakedly (once again, pun intended) exploitive premise, what eventually makes STRIPPED TO KILL memorable and earns it a shaky recommendation from me is just the sheer audaciousness of Shea’s attempts to inject some unexpected poignancy when it comes to a suspect who is clearly a red herring and the out-of-left-field artistry to the dance sequences (especially for a club called “The Rock Bottom”). While it is never a smooth shifting of gears that the film goes through for these moments, I appreciated the effort to deliver a little bit of pathos and unexpected curveballs amidst a plot that is largely stagnant for the first two acts. 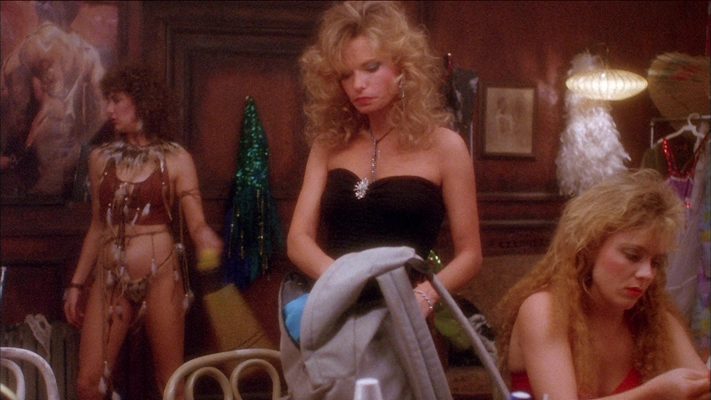 While I did find much of the slasher plot wanting, Shea does deliver with an ending that’s downright whacky in its execution of a twist that was fairly obvious to any audience member giving the film even twenty percent of their attention. Balancing the film’s odd comedic beats with an over-the-top chase/fight sequence that feels weirdly apocalyptic, any tenuous strand of logic connecting STRIPPED TO KILL to something resembling the real world is cut and the film is that much better for it in the end.