The following is a brief presentation I did for a Kevin Geeks Out show a couple years ago, which I offer today as meager tribute to a very wonderful icon of the screen, Julie Adams (1926-2019).

I always favor the B-team. Look at the poster for tonight’s show. Notice whose faces are on the bottom, covered with words. 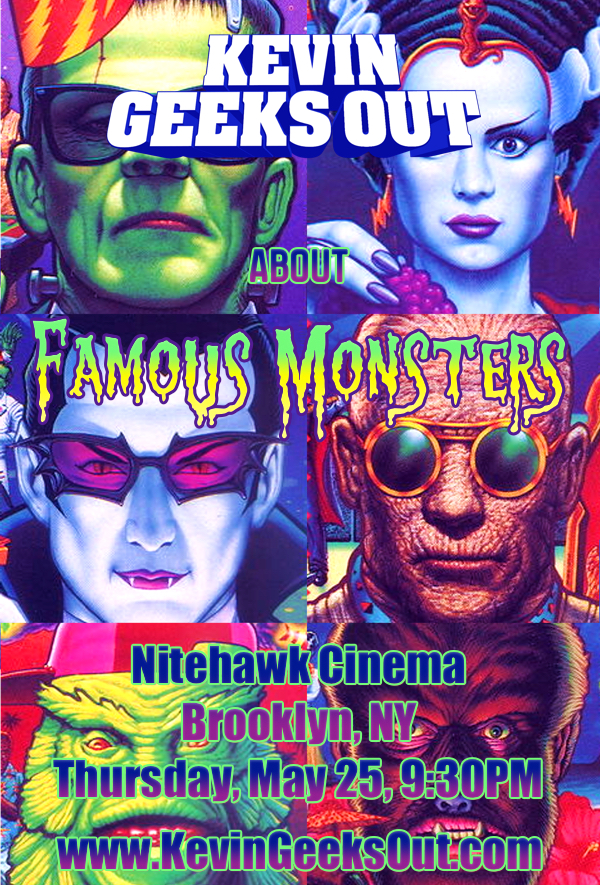 Frankenstein and his Bride, Dracula, Mummy, and Invisible Man — those are the A-list monsters.

Wolf-Man and Creature from The Black Lagoon always follow. Why? Maybe because they’re more like animals than people?

The reverse is true, in my opinion. 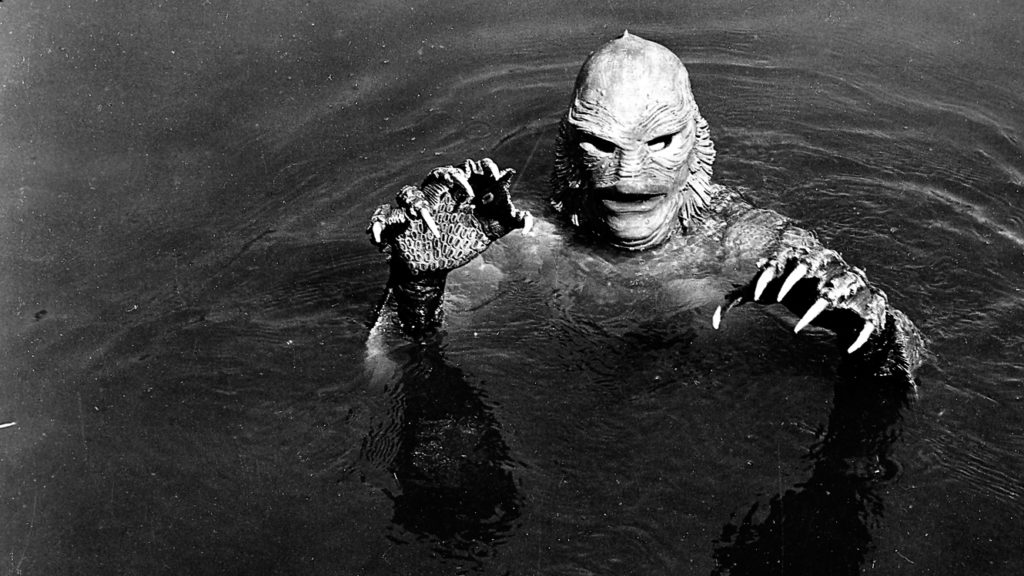 My niece, who is nine, saw a picture of the Creature and said, “He looks funny. No monster would want to hear that.” And it’s true. He’s not special amongst the Universal monsters for necessarily being the scariest. 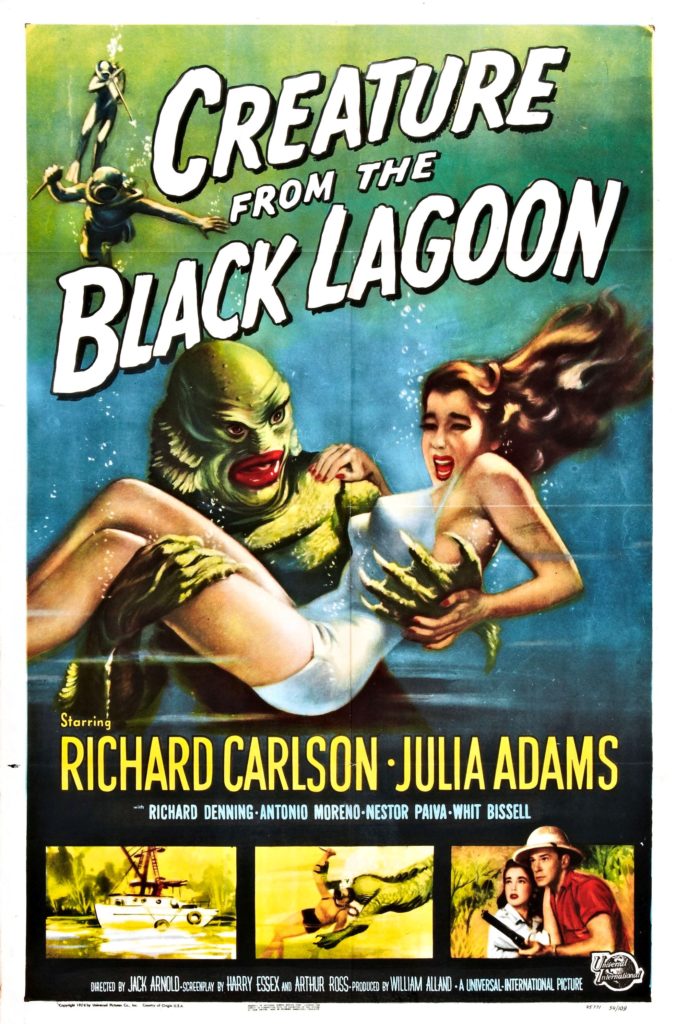 All the other Universal monsters, even the Wolf Man, hail from the World War II era, from history, legend, literature, or European tradition.

The Creature is different. He came later, in the Atomic age. He arrived in 1954, same year as Godzilla.

But Godzilla is an animal. Creature is somewhere in between. 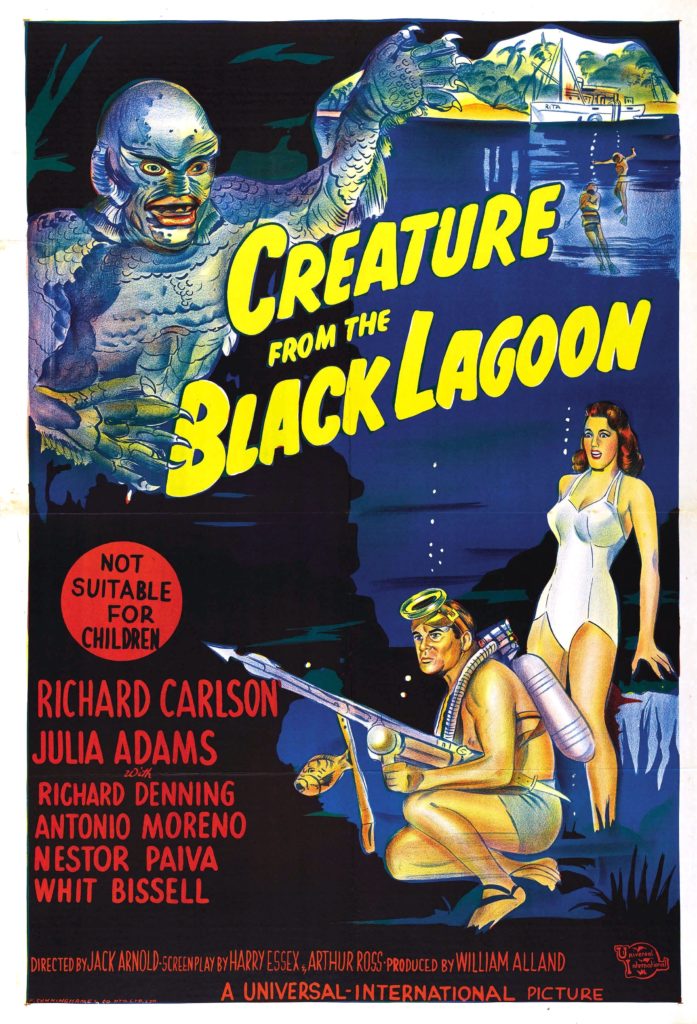 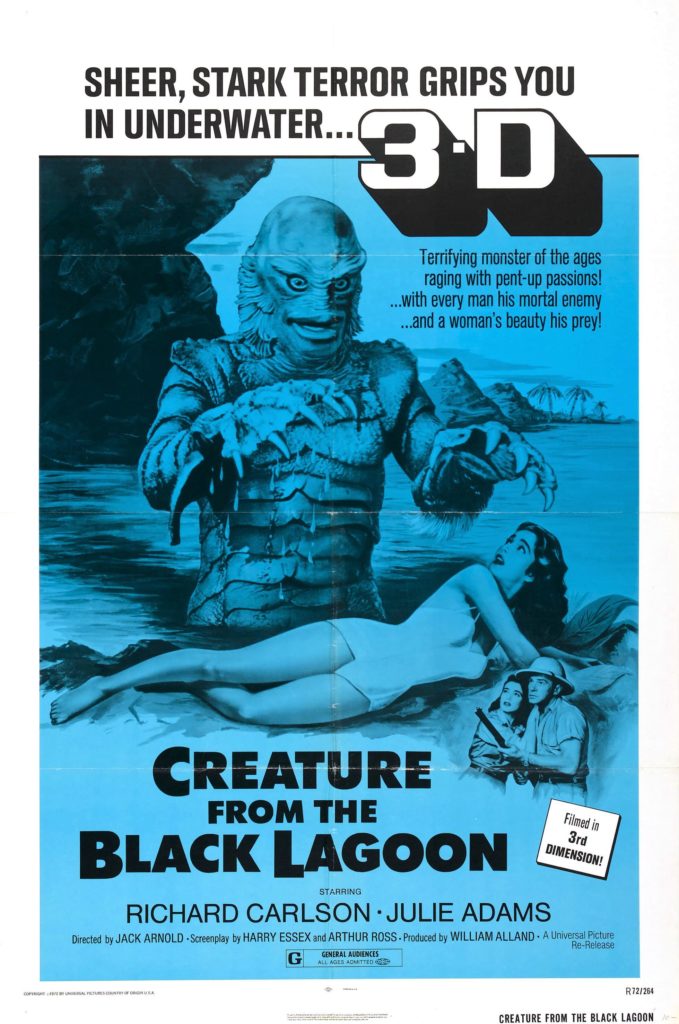 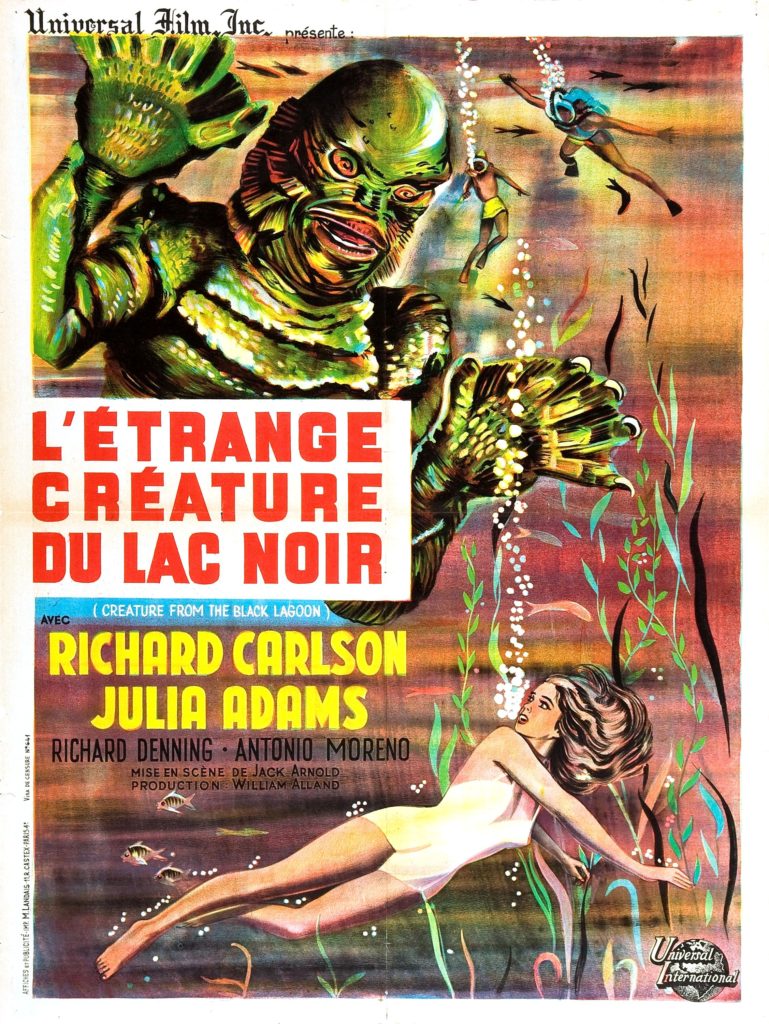 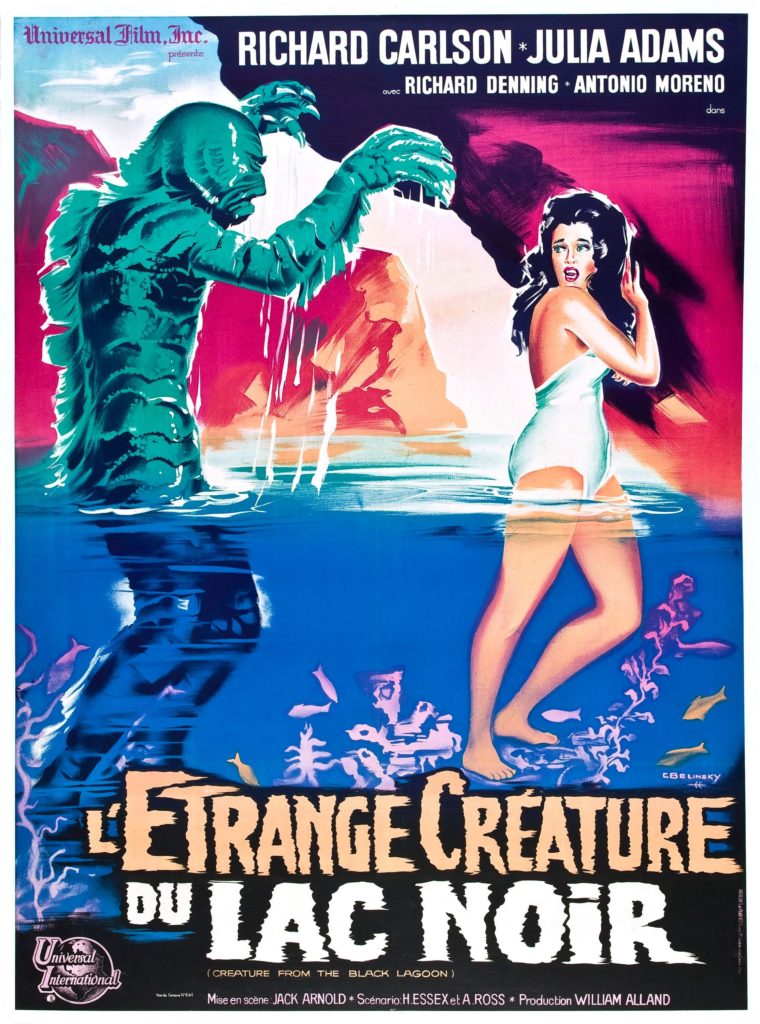 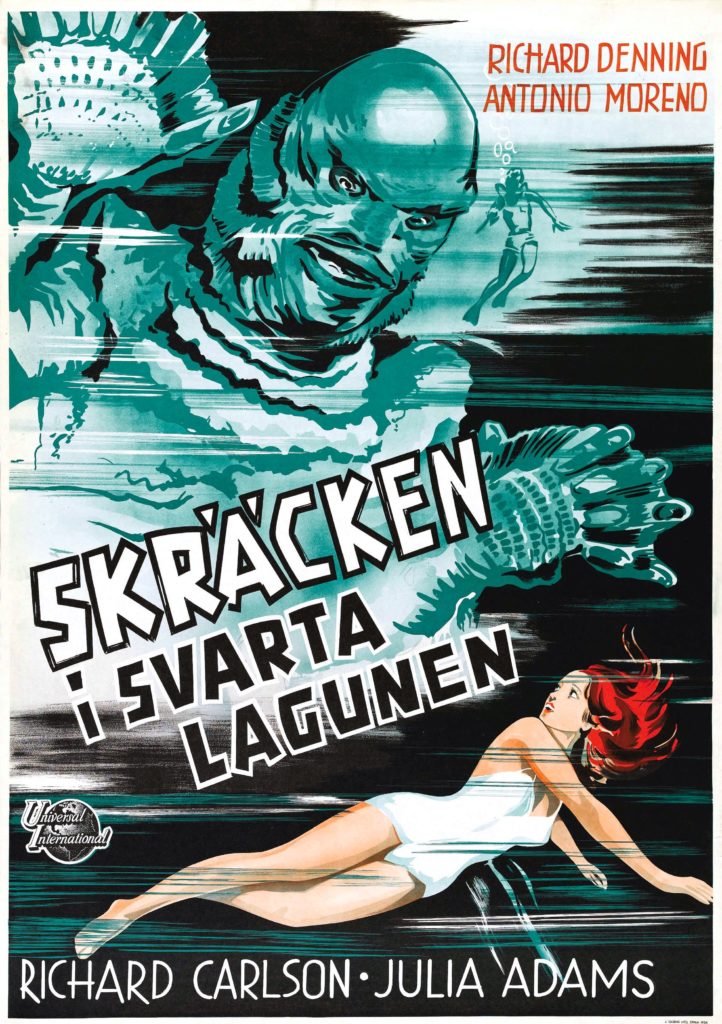 Look at these international posters. What do they have in common?

Besides the Creature, and besides his funny fish face. 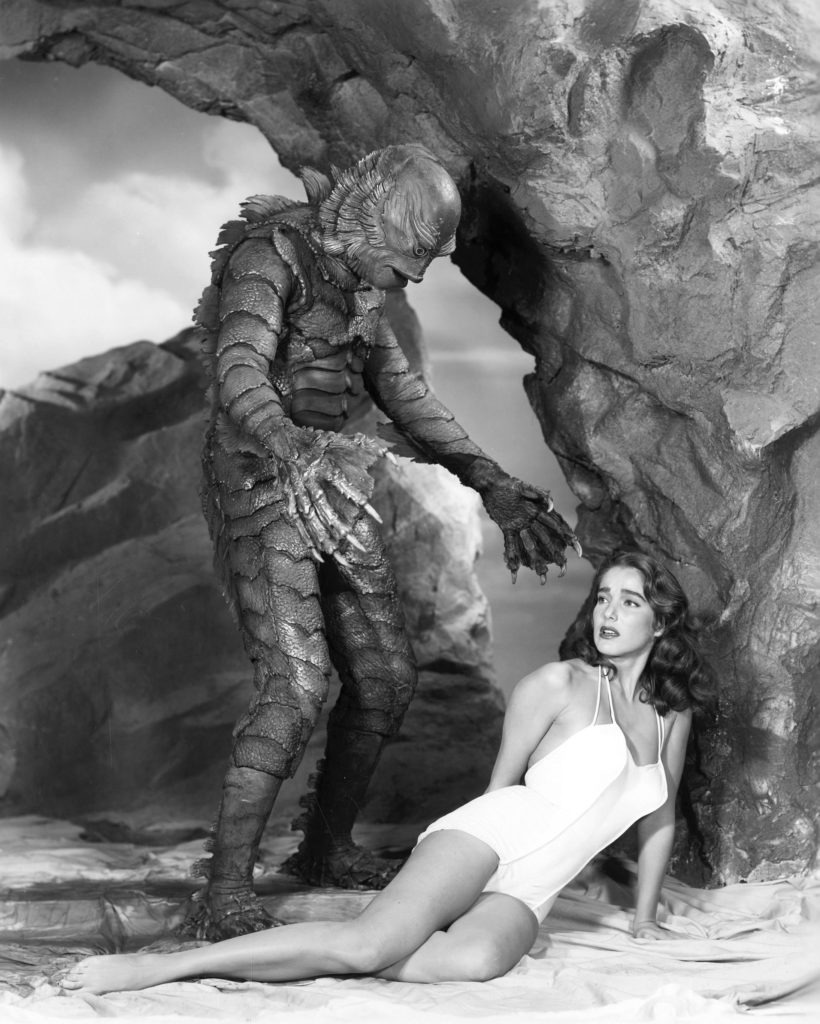 The iconic image of the Creature From The Black Lagoon is really only complete when the brunette in the white swimsuit is included. It’s a package deal. There’s no him without her. 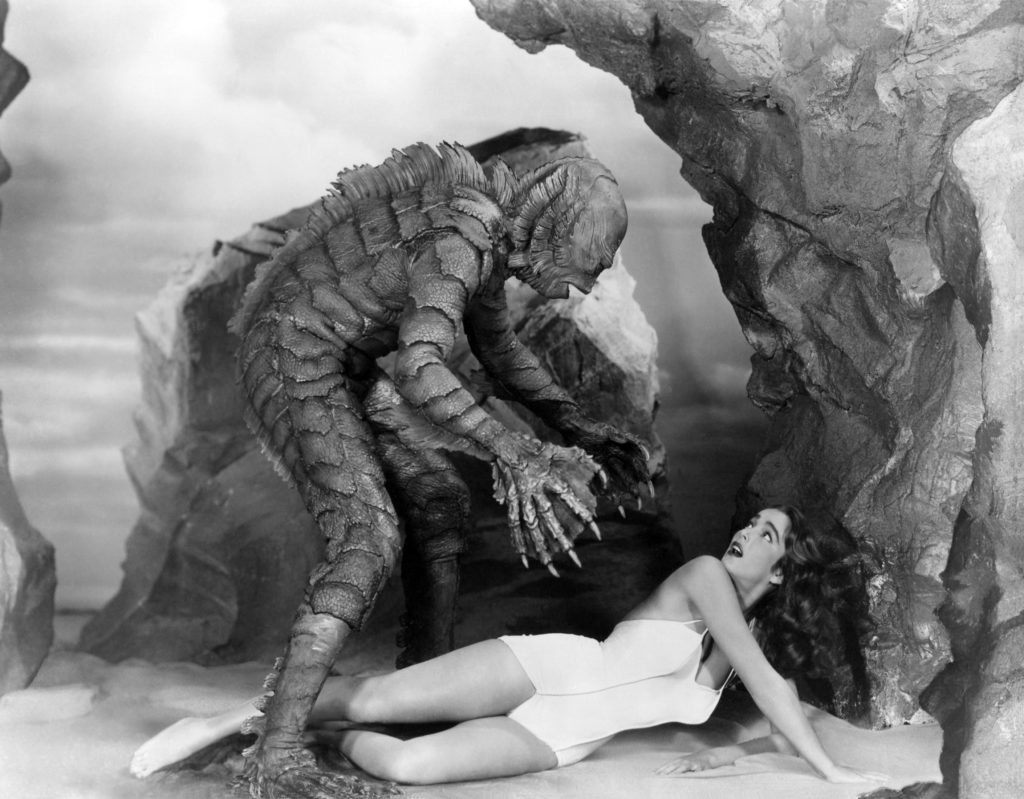 That’s the essence: The Creature has a mad crush on somebody who’s [arguably] out of his league, and better-looking rivals with more happening jobs keep getting in his way. No matter your gender or species, who can’t relate to that? 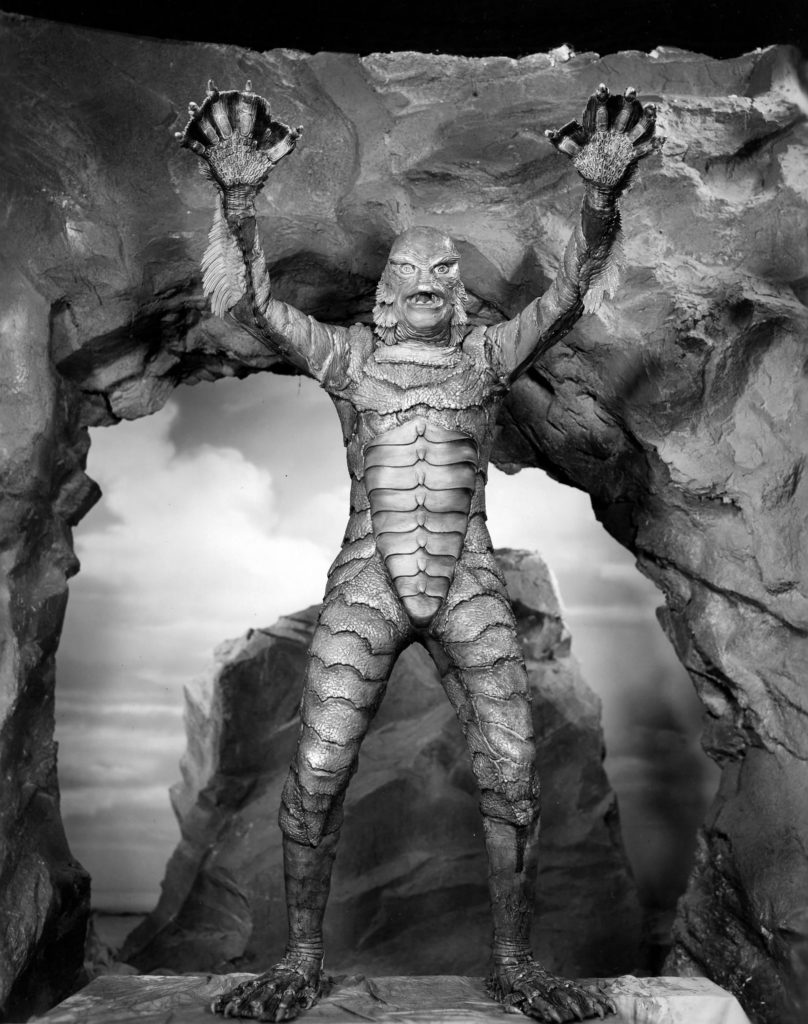 Producer William Alland copped to the fact that the Creature owes plenty to King Kong. Both are primordial monsters who would rather be lovers than fighters. They just don’t know a polite way to show it. 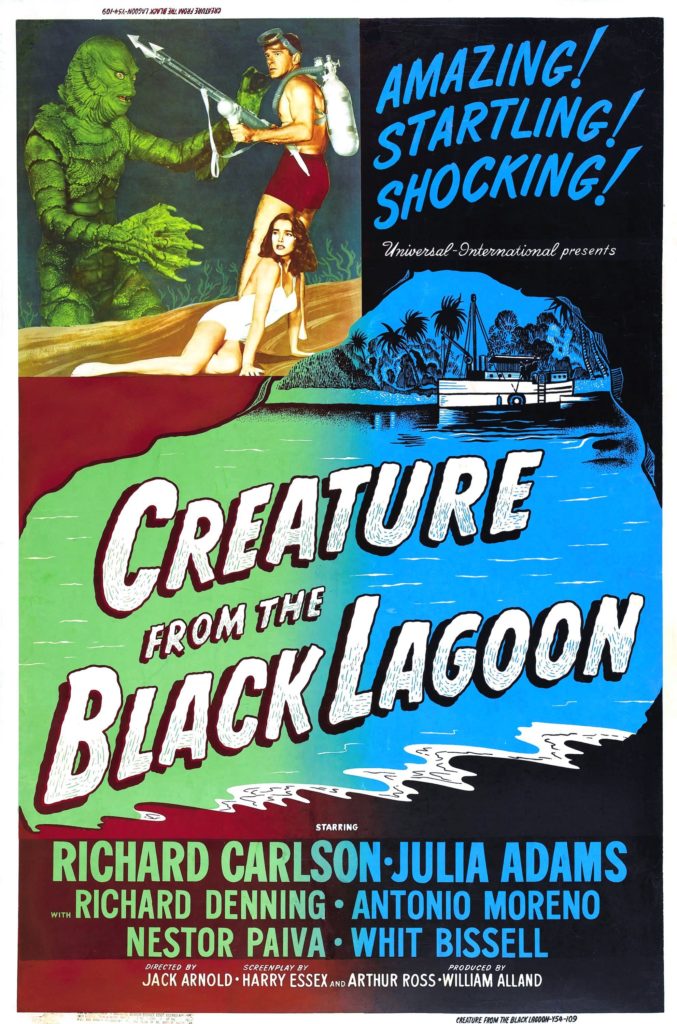 There are really two ladies in the Creature’s life. One of them isn’t anywhere on the poster. 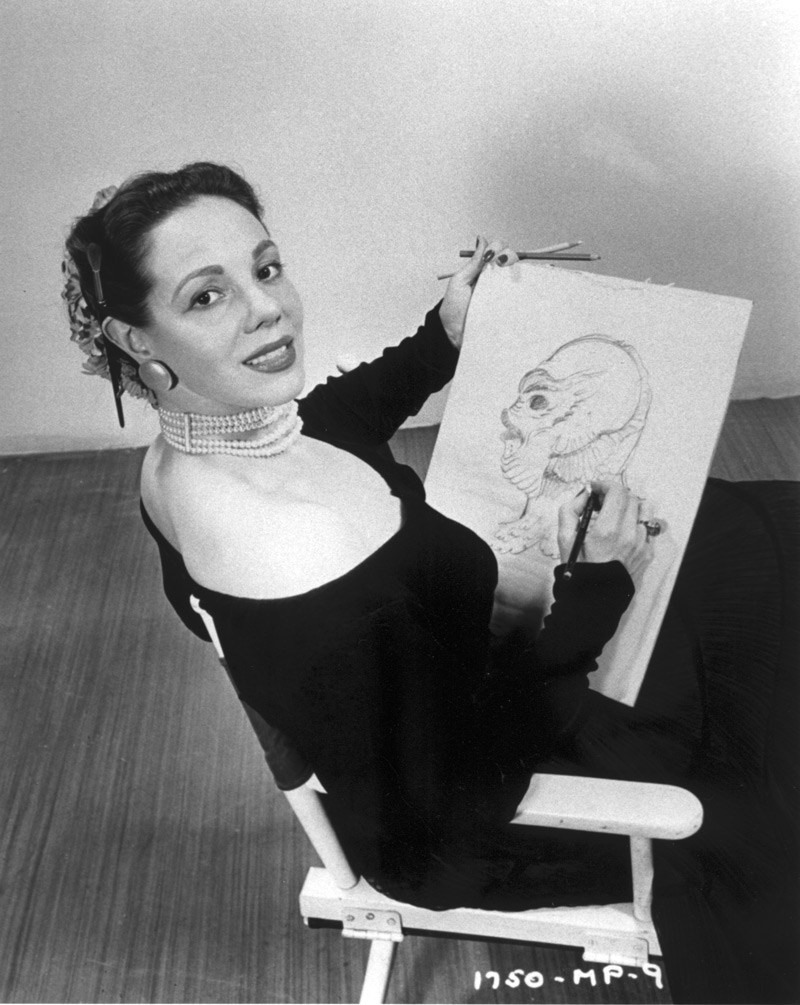 This is Milicent Patrick, who designed the Creature, although a man named Bud Westmore gets most of the credit, even today. 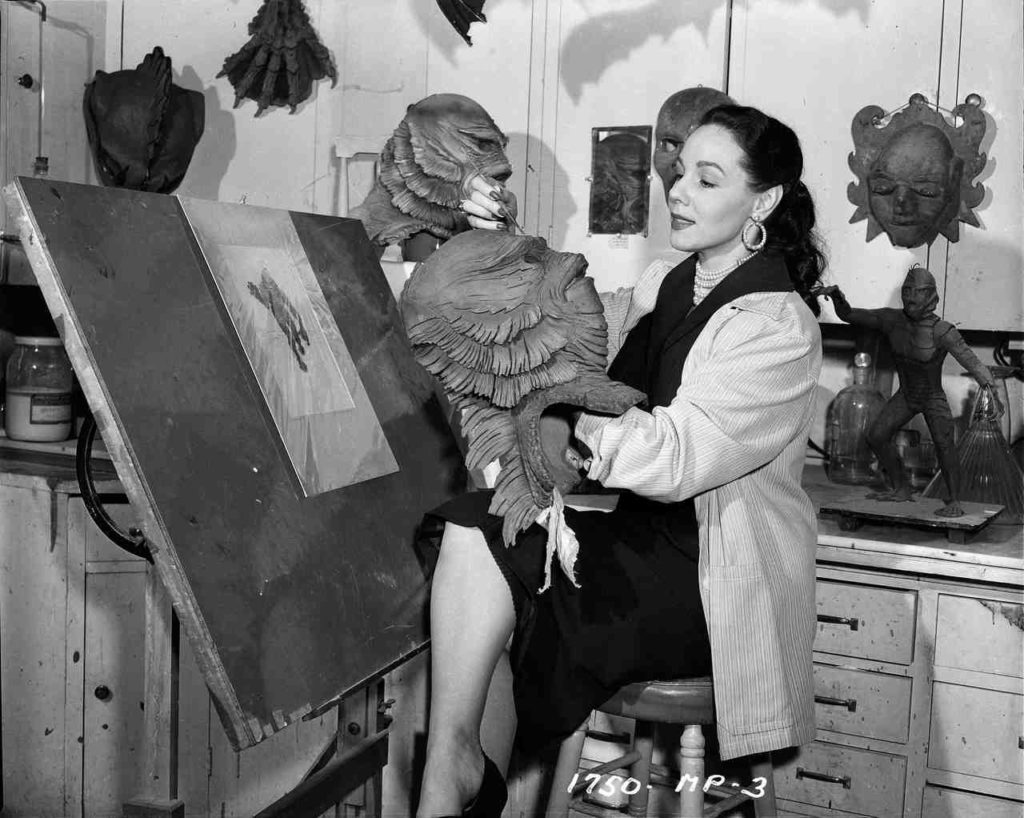 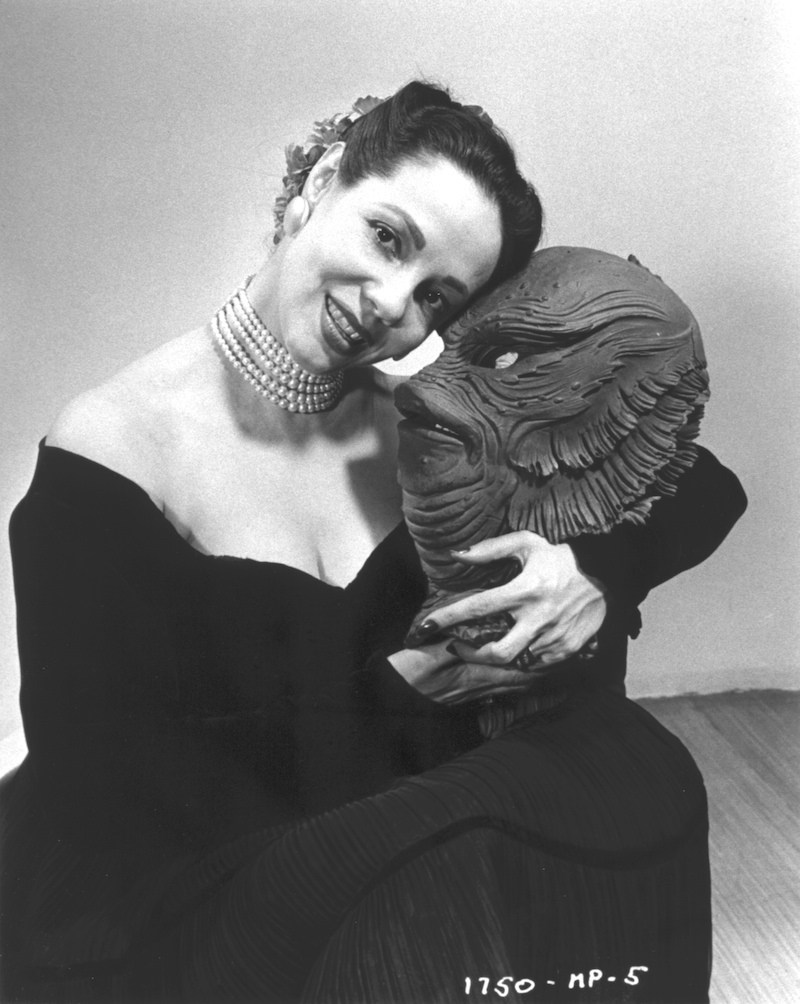 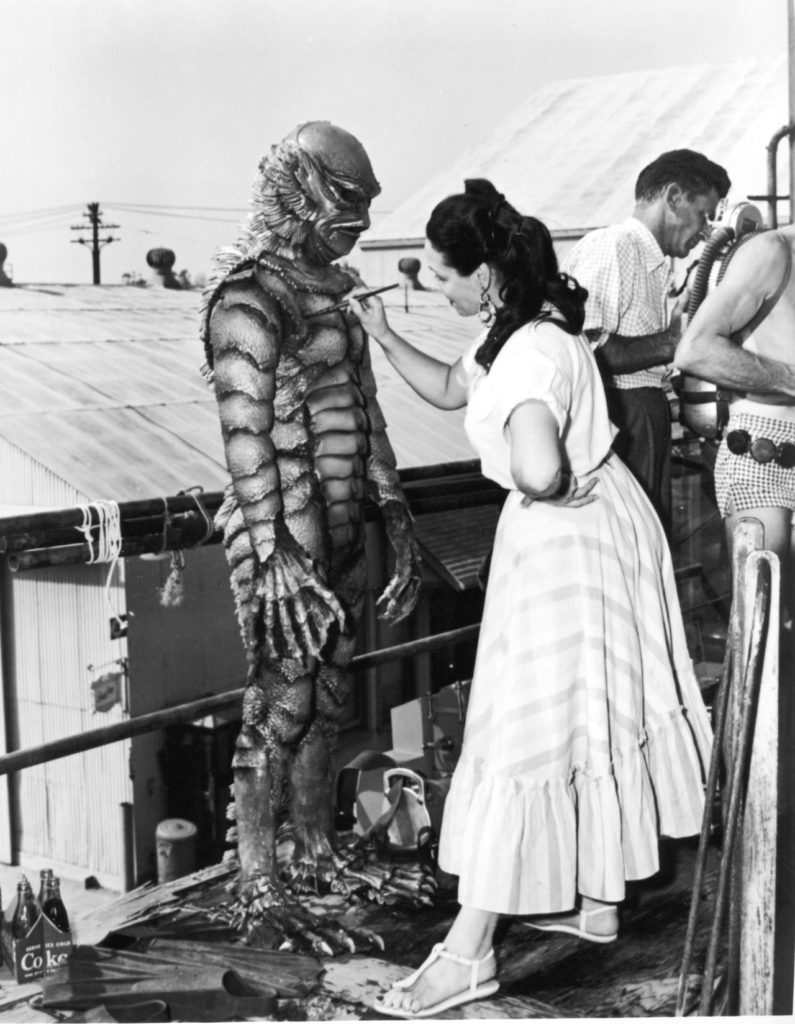 Milicent Patrick worked as a Disney animator and a special-effects artist and occasionally as an actor and somebody really ought to make an entire movie all about her. She’s mysterious and fascinating and if all she did was design the look of the Creature, that’d be epic, but she created other legendary monsters too, like the mutant from 1954’s THIS ISLAND EARTH. (You’d know it if you saw it.) 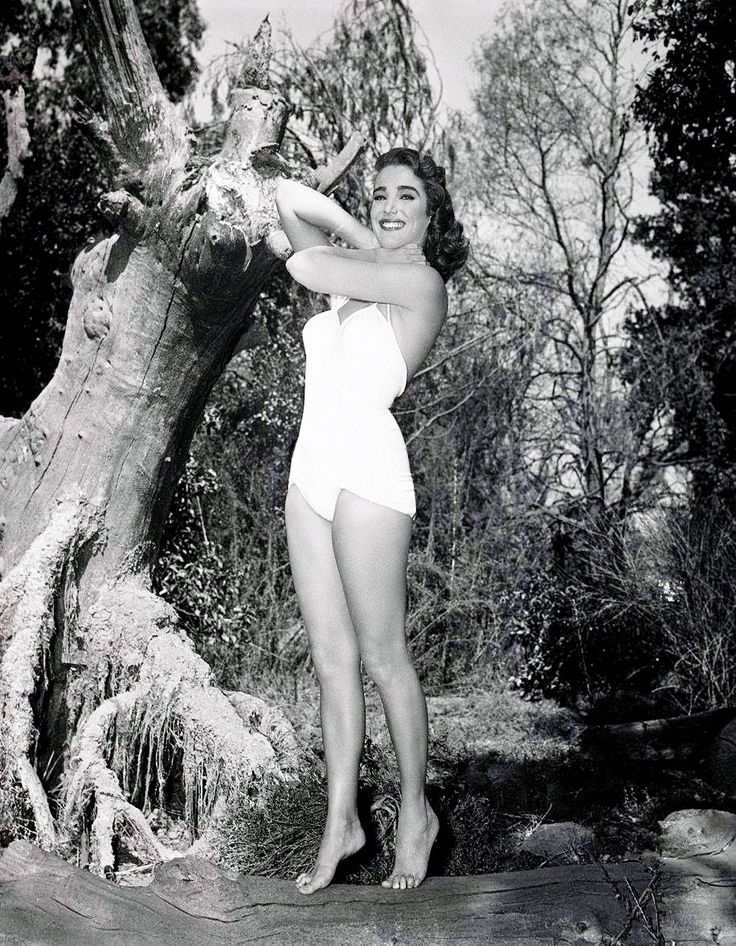 The other lady in the Creature’s life is better-known. She’s the first woman he ever sees. Her name (in the 1954 film) is Kay Lawrence, and she’s played by Julie Adams! 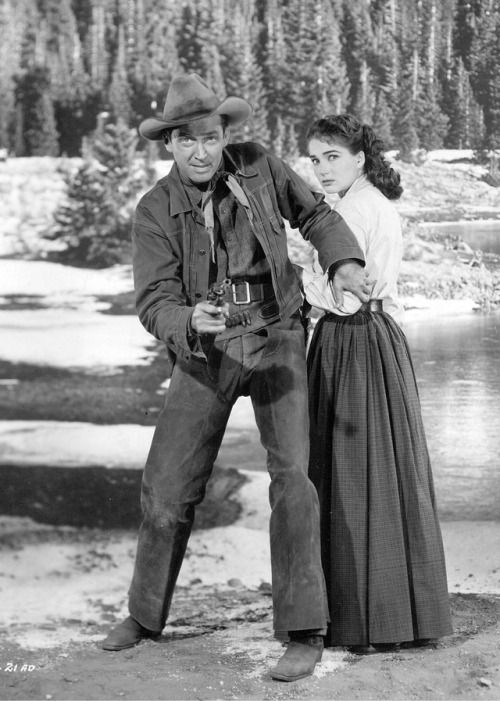 THE CREATURE FROM THE BLACK LAGOON wasn’t Julie Adams’ first role and it was far from her last. She co-starred with Elvis Presley, Charlton Heston, and James Stewart (in BEND OF THE RIVER, directed by the under-discussed Anthony Mann). But in this one film, she was an essential half of a legendary whole. The Creature is eye-catching on his own, but with her in the picture, you cannot look away. 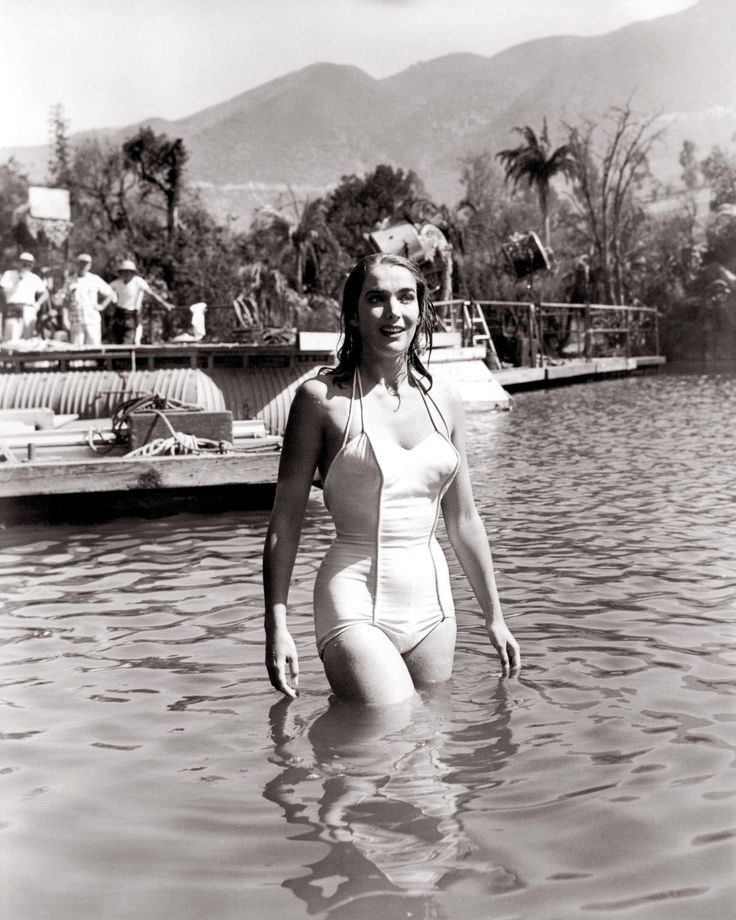 I mean, imagine you’re a prehistoric missing-link monster and this is the first lady you ever saw. Might be tough to play it cool. 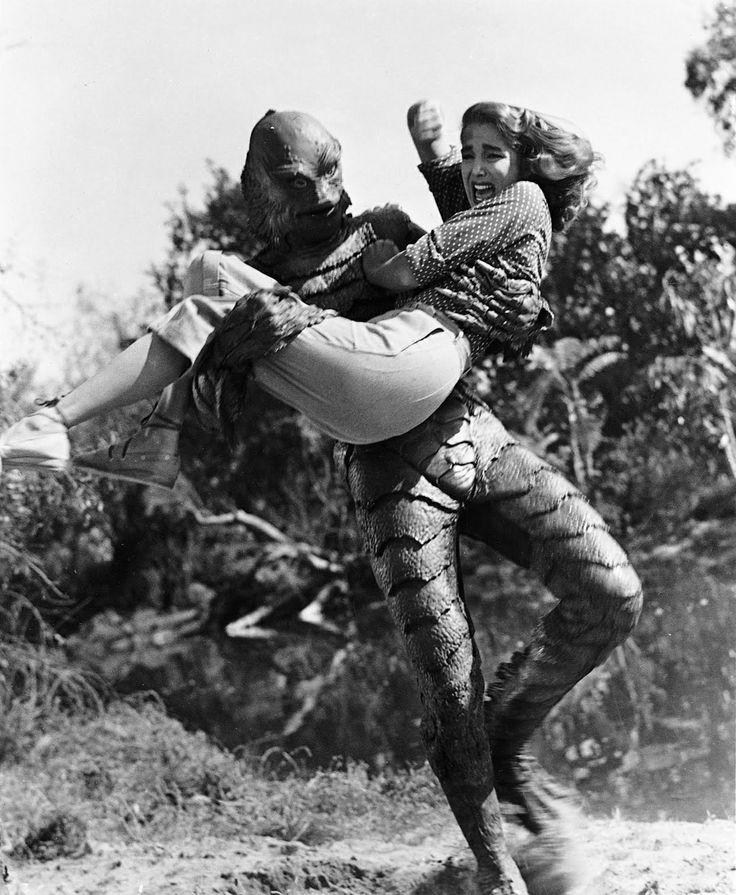 Gentlemen — obviously, you must always ask a lady first if she wants to dance. But how would the Creature know to do that? He’s been lurking in a swamp for hundreds of years! They don’t teach proper manners down there. 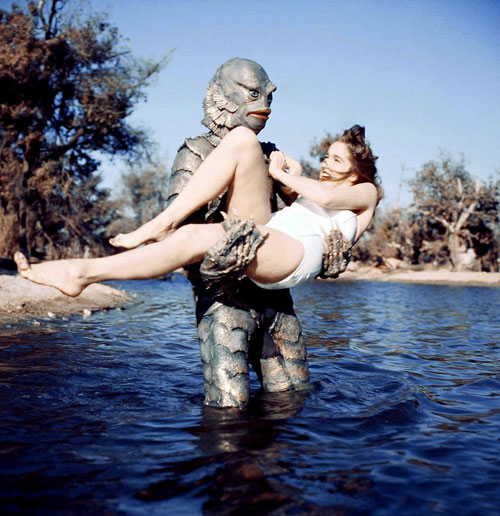 To me, one of the most amazing scenes in movies is the one where Kay goes for a swim, not knowing yet that she has a secret admirer. Seven decades later, even knowing after all the behind-the-scenes and making-of legends, this scene still has the power to transport. “Movie magic” is a phrase worn so well it’s almost meaningless, but that’s what this scene is. It’s magic, the kind of spell only movies can cast. 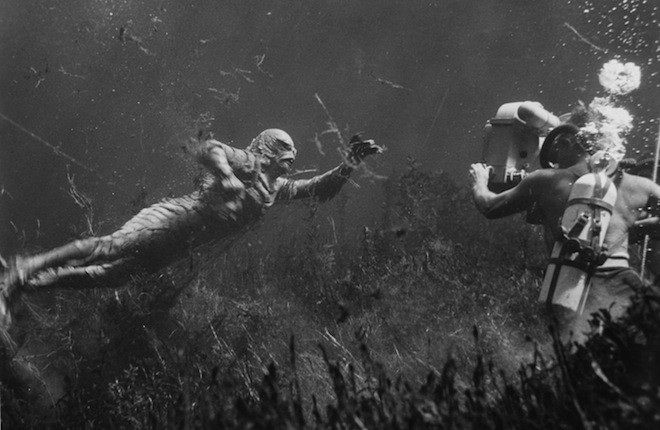 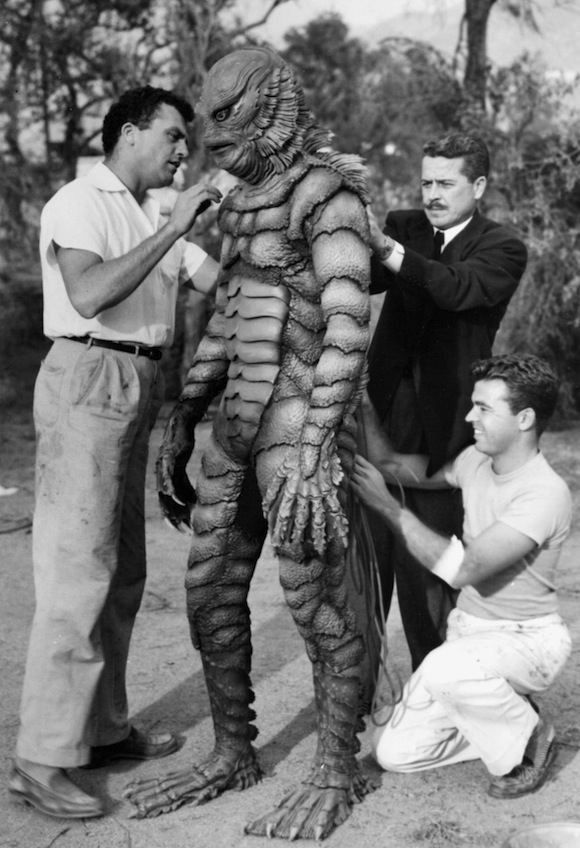 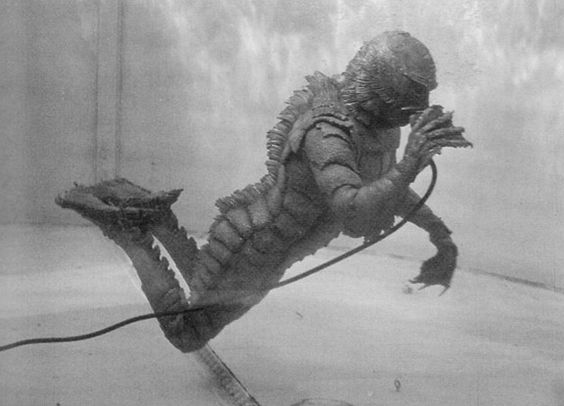 In the so-called ‘underwater ballet’ sequence, the Creature is played by Ricou Browning, and Kay is played by Ginger Stanley. The film’s second unit shot this incredible, weird, silly, creepy, beautiful scene in Florida, which makes perfect sense. I’d like to close by showing that scene to you. If you’ve already seen it once or a hundred times, watch it again and marvel. 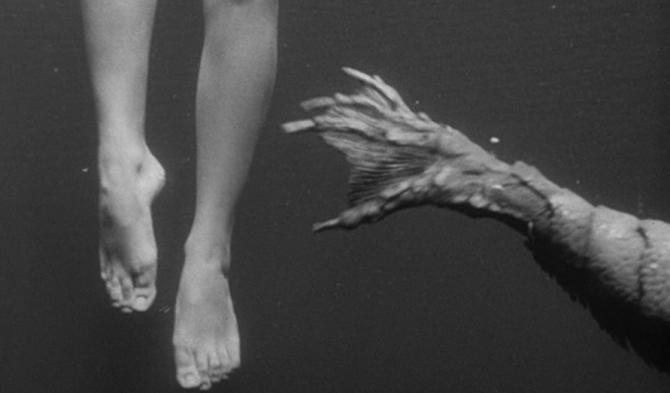 To me, it’s poetry. Strange, creepy poetry. Like a love note from an awkward weirdo. And female or male, gay or straight, lagoon-creature or Earth-human, we’ve all been there.

The best academic book that exists on the Creature to date is this one, by Tom Weaver.

I’m extremely excited about next month’s THE LADY FROM THE BLACK LAGOON, which centers on Milicent Patrick.