Home  ⁄  The Wire  ⁄  SUICIDE SQUAD IS THE SUMMER BLOCKBUSTER TO END ALL BLOCKBUSTERS, SAYS @TRASHFILMGURU 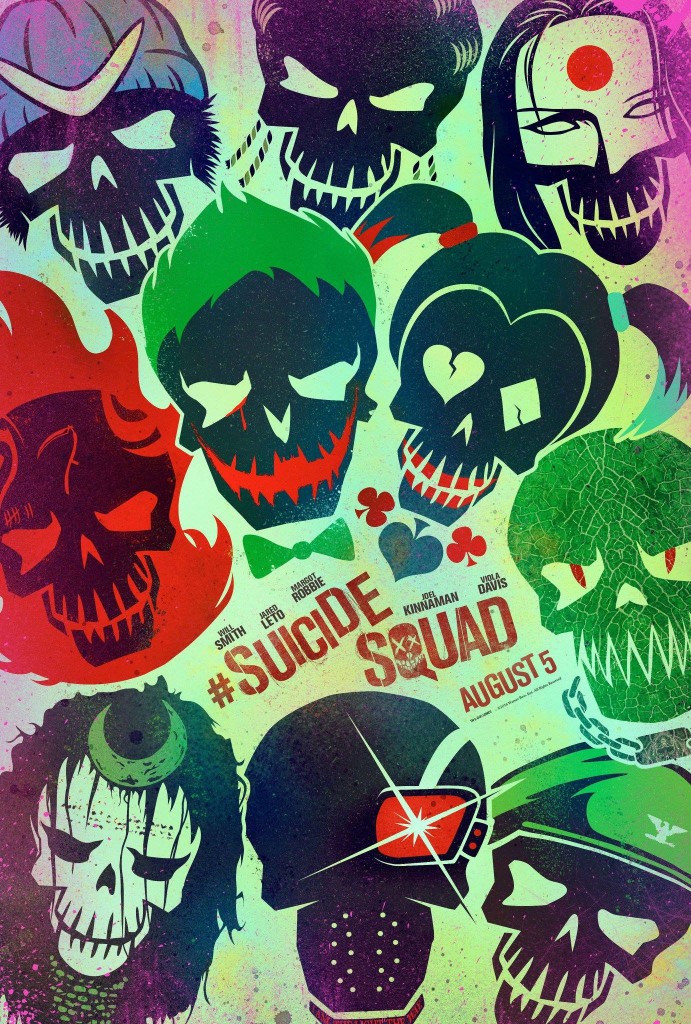 If there’s one thing that’s even more pathetic than the “Marvel Guy” vs. “DC Guy” debates that have been raging among comics fans for years, it’s seeing those same arguments steroid-pumped beyond comprehension now that four-color funnybooks have become the go-to “IP source” for multi-million-dollar Hollywood blockbusters. “Marvel movies are the best!” “You take that back, DC movies are the best!” — it’s all so mind-numbingly tedious.

Not to mention fundamentally dishonest. Just as neither publisher deserves to have anyone rooting for them given their sorry ethical histories and largely substandard product of recent vintage, the same is true for both cinematic universes — by and large, they’re entirely unexceptional on their best days, offensively mediocre on their worst. 2016 hasn’t bucked this trend in the least to date, with Marvel’s CAPTAIN AMERICA: CIVIL WAR being yet another bland two-and-a-half hour TV episode with lots of guest stars, and DC’s BATMAN V. SUPERMAN: DAWN OF JUSTICE being a largely grim and self-serious effort that, while being nowhere near as lousy as its numerous critics allege, still doesn’t manage to rise above the level of being anything more than a visually interesting, painfully over-earnest slugfest. But damn if people haven’t succumbed to their most base tribal impulses and self-segregated into camps according to which celluloid super-hero brand they think is better.

The internet is the battlefield of choice for these less-than-noble unpaid warriors for the Disney and Warner media conglomerates, which I suppose is better than watching folks fight it out in the streets, but the gusto with which each camp promulgates its ultimately untenable position that either one or the other is all that good has given way to the sort of excesses that usually only emerge in the philosophical or political arenas, and there they can be can at least be understood to a degree (if not excused) given that the subjects under debate actually matter — which, I’m sorry, is hardly the case here. Whoever ultimately wins the battle for your super-hero dollar at the box office, be it Disney/Marvel or Warner Brothers/DC, isn’t going to put food on your table, educate your kids, stop global warming, eradicate nuclear weapons, curb police brutality, or block a mentally unstable sociopath from being elected president. They don’t care about you — who why should you care about them?

And yet, care about them people most certainly do — to a degree that can only be called alarming, at this point. For evidence of just how absurd it’s all become, look no further than the petition swirling around online to shut down Rotten Tomatoes, the aggregate-score movie review powerhouse website, simply because the appraisals pouring in for DC’s latest mega-blockbuster, SUICIDE SQUAD, are wretchedly poor on the whole. This will go nowhere, of course — but the fact that there’s even one person out there, never mind thousands, who would like to permanently silence opinions that run counter to their own is a troubling sign of the insanity that has gripped some of fandom’s more unfortunate quarters. Shit, it’s bad enough when folks try to drown out the originators of dissenting viewpoints, but RT is nothing more than a convenient clearing-house for opinions that have already been expressed elsewhere. Do get a life, people. 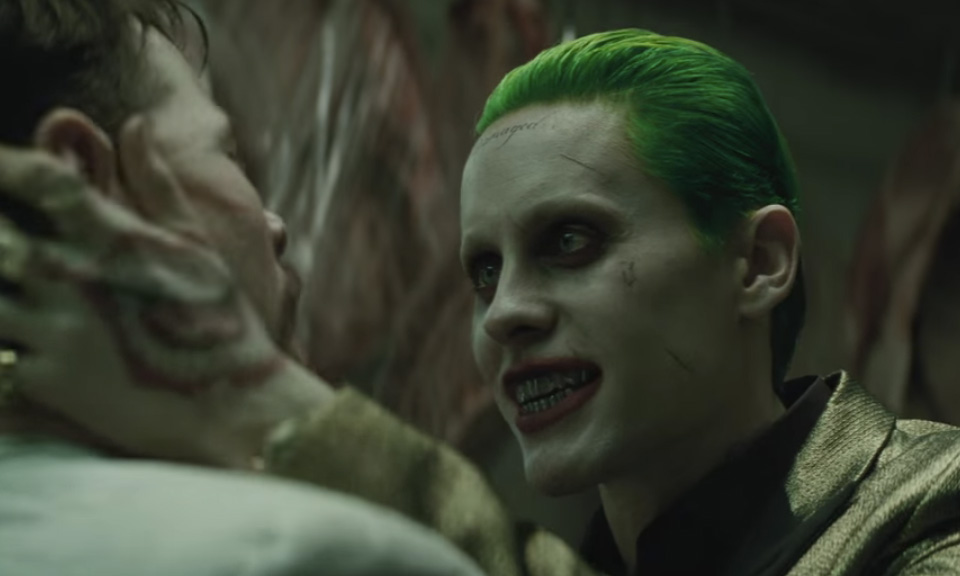 Still, it’s not like Marvel fans can claim any particular moral superiority on this front, either. Earlier this year, when an entirely more reasonable petition emerged (on Rotten Tomatoes, no less!) asking for Disney to stop paying critics for phony positive reviews, it was met with howls of derision and racked up several million “dislikes” to only a few thousand signatures in its favor. The hard-core Marvel fans want their insular worldview protected at all costs every bit as much as their DC-loyalist counterparts, and they don’t even mind that supposedly “impartial” critics are getting paid to do the reinforcing.

And here’s where things get really frustrating for somebody who just wants to hate ’em all and be done with it like myself — idiot-ass anti-RT petitioning aside, the more rational DC fans do sort of have a point, because the boat-load of negative reviews that SUICIDE SQUAD is attracting to itself like flies on horse’s backside are proof-positive that plenty of critics are, in fact, completely in the tank for Dis/Mar.

I don’t offer that opinion simply because they’re saying it’s bad, of course — all art is subjective and you can like or dislike something for any reason at all according to your whims or, preferably, logic — but because of why they’re saying it’s bad. The big knock on BATMAN V. SUPERMAN was, of course, that it was “too dark” and “no fun,” and while writer/director David Ayer has certainly concocted another dark flick with SUICIDE SQUAD, it’s all kinds of fun, riddled as it is throughout with gallows humor, intense action, memorable characters, superb performances, standout effects work, sharp and witty dialogue, and breakneck pacing that doesn’t give you too much time to think about its gaping plot holes. In short, it has almost everything the paid gatekeepers of public taste said the last DC flick was lacking (and certainly everything you could ask for in a brainless summer “popcorn movie”) — and yet they still uniformly despise it. I may not have a whole lot of respect for DC/Warner as a corporate entity, but damn — I still know when the fix is in, ya know?

For those unfamiliar with the particulars here, they’re fairly basic : concerned by the threat posed by super-powered villains in world where Superman is now (presumed) dead,  cold-blooded Pentagon operative Amanda Waller (portrayed with Oscar-worthy calculating menace by Viola Davis) assembles a crack team to beat the baddies at their own game that’s composed entirely of — super-powered villains? Well, okay, who better to fight ’em than their own kind, I suppose, and she’s got herself a crackerjack crew here consisting of assassin-who-never-misses-a-mark Deadshot (Will Smith), gang-banger who can control fire El Diablo (Jay Hernandez), Aussie burglar extraordinaire ( I needn’t tell you what his weapon of choice is given his name) Captain Boomerang (Jai Courtney), scaly and amphibious monster of the sewers Killer Croc (Adewale Akinnuoye-Agbaje), honest-to-goodness immortal witch Enchantress (Cara Delevingne) and the Joker’s even-crazier-than-he-is girlfriend, Harley Quinn (Margot Robbie). In the field, the misfit army is led by Rick Flag (Joel Kinnaman), the most highly-decorated special forces operative in US military history, and his back is protected by Katana (Karen Fukuhara), a modern-day samurai warrioress with a soul-trapping supernatural blade. And every one of these already-unstable reluctant soldiers is corralled into service via a combination of manipulation of their weaknesses and/or personal blackmail — and a nano-tech bomb implanted into their skulls that will go off the second they break ranks. The best they’ll get out of the deal is ten years shaved off their respective prison sentences. The worst is they’ll end up dead and the government will deny ever sending them in the first place, given this is a strictly “off the books” operation. If you’re thinking it all kinda sounds like The Expendables with super-powers, you’re absolutely right. 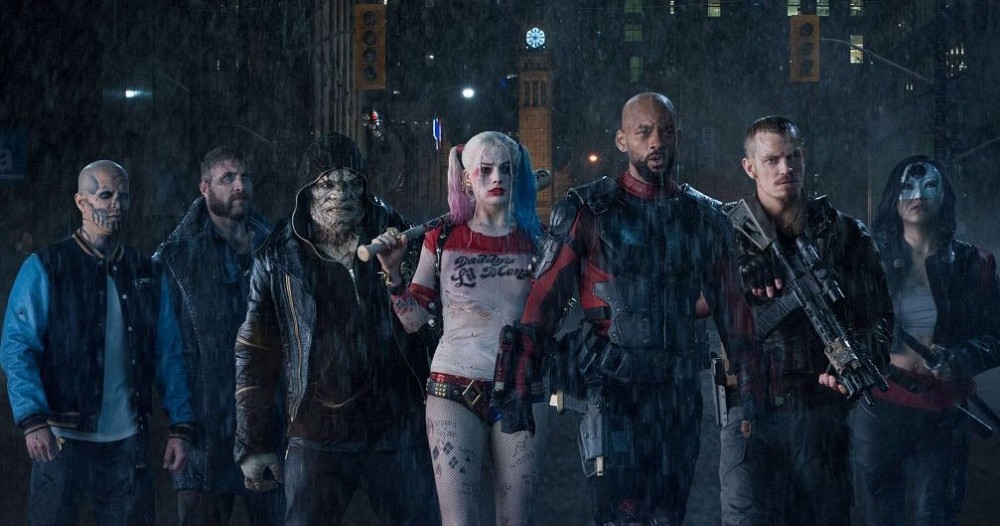 And, like all the films in that venerable trilogy, this thing is an absolute blast of stupid, high-voltage hijinks from start to finish. The set-up is minimal, we get plunged right into the action when the Squad is tasked with cleaning up a mess of Waller’s own making) after one of her conscripts “goes rogue” and threatens to destroy and entire city on the way, of course, to world conquest), and it never lets up. Any flick that eschews conventional three-act story structure as blatantly as this one does is bound to be a bit wobbly when it comes to “Plotting 101” basics, but Ayer weaves in any number of brief-but-effective character “beats,” the team’s chemistry is fantastic on the whole (particularly the “caretaker/caretaken” relationship that forms between Deadshot and Harley), the threat they face is formidable enough to warrant serious concern, and everyone gets to contribute to the final victory. The acting ranges from good (Courtney, Kinnaman) to great (Davis, Smith, Robbie, Hernandez, Akinnuoye-Agbaje), there are fun and even essential cameos from Ben Affleck’s Batman and Ezra Miller’s Flash, Jared Leto’s highly-anticipated new iteration of The Joker (think Cesar Romero on a “cocktail” of PCP, Flay Agaric, and high-grade crystal meth) steals every scene he’s in,  and long-time comic book readers even get treated to a smattering of respectful “Easter Eggs,” such as when the gang rescues Waller from the “John F. Ostrander Federal Building” — a nod to the legendary scribe of most of the seminal Suicide Squad stories of the 1980s. In short, those last-second re-shoots that Warners ordered appear to have paid off as there’s literally something in here for everyone from seasoned fans to the most casual of “newbie” viewers, and yet none of it feels forcibly shoe-horned, so expert is the execution. Yes, it’s packed to the gills and beyond with stuff both vital and less-than, but it all works. In short, this is the DC movie that everyone who says they don’t like DC movies has been asking for — heck, it even offers all these folks nearly every specific thing they claim was missing in previous efforts.

And yet, for all that, the knives are still out, and for all their millions, DC and Warner still can’t seem to catch a break. I won’t go so far as to say that I “feel sorry” for them — they’re a rich corporation and this movie, negative reviews and all, is still going to rake in a ton of cash and make them even richer. But I know a crock of shit when I see (and smell) one, and I would be remiss in my (mostly voluntary, it must be said) duties if I didn’t call out the well-organized “whisper campaign” against this film for exactly what it is. So fuck all the naysayers, it’s never been more clear who’s lining their pockets (free passes to the local preview screening of the next Marvel Studios flick and empty promises of a “potential set visit if you’re ever in the LA area” is usually the going rate to buy “major” critic or blogger, if you must know) — SUICIDE SQUAD is easily the most fun you’ll have at the movies this summer.