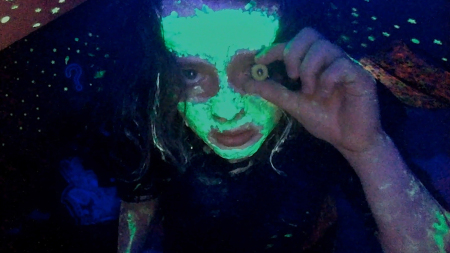 When I was in high school, I had a YouTube channel with my two best friends. Using my tiny digital camera, we recorded ourselves doing hot nonsense, which included going “sledding” in sand pits at the local golf course and filming “sketch comedy” behind a 7-11. We saw YouTube as the Place to Be, where we could share content and meet people across the Internet. Of course, we were called nasty names but it didn’t matter; it felt like we were reaching someone somewhere. This subconscious digital longing is beautifully captured in Jane Schoenbrun’s stunning debut feature film, WE’RE ALL GOING TO THE WORLD’S FAIR, which premiered as this year’s Sundance Film Festival. Through the combination of simple digital interfaces and gorgeous traditional filmmaking techniques, Schoenbrun creates a story that captures the terrifying unknown that lurks in cyberspace.

WE’RE ALL GOING TO THE WORLD’S FAIR focuses on the world of Creepypasta, a website where users could share their supposedly true horror stories. Here, figures like Slender Man were born, creeping into the minds and hearts of the youth through a glowing computer screen. These stories infect minds around the world, creating a digital folklore that sometimes leeches into the real world. In Schoenbrun’s film, the urban legend is centered on a ritual that will supposedly send you to The World’s Fair. What it is, nobody knows, but Casey (Anna Cobb) wants to find out.

Casey is utterly alone. Her father is merely a booming voice yelling at her to go to sleep. She walks around her small town in solitude, solemnly gazing over empty strip mall parking lots and fast food drive thrus. In an attempt to soothe the pulsating loneliness, Casey does what most of us do: turns to the Internet. After watching videos about the World’s Fair challenge, Casey decides she wants to try it and records the ritual for her YouTube channel. Creators across the Internet have been trying it, so in joining them, she can become part of that community. She sits in the dark, recites the phrase “I want goto the world’s fair” three times, smears her blood on her computer screen, and watches a strange video of strobing lights to seal the deal.

In performing this digital ritual, Casey is trying to find someone to listen. She shouts into the cybervoid and strains to hear someone shout back. And they do. A user named JLB (Michael J. Rogers) to be precise, who believes that Casey is in real danger after performing the challenge. With his introduction, the film’s perspective slightly shifts on to JLB, who is an older man chatting with a young girl on the Internet. His intentions, while never explicitly stated, plunge the viewer into a state of anxiety, as they know Slender Man isn’t the scariest monster to lurk in chat rooms. The addition of JLB adds another layer of fear that examines what horrors exist outside of glowing screens.

Schoenbrun brings all corners of the internet together in this film, from Creepypastas to dance videos to ASMR, to build a microcosm of the digital experience. Casey is shown laying on her back in bed, watching video after video where users are uploading vlogs of their World’s Fair transformations. When she can’t sleep, she watches ASMR videos of someone lulling her to sleep. All of Casey’s comfort originates from a screen. It looks like she has her own self-care in her hands, a place where she can turn when she needs help. Yet, this has pushed her further into herself.

WE’RE ALL GOING TO THE WORLD’S FAIR is contemplative and therefore uses much of its runtime to build tension and establish Casey as a person rather than as a vessel for fear. Its genuinely creepy moments, quickly manifest and disturb the quiet monotony of her routines, creating an uncomfortable and unsettling experience for the viewer; they never know what may appear next.

WE’RE ALL GOING TO THE WORLD’S FAIR never gives the viewer a straight answer, which is both frustrating and appropriate, just as Creepypastas and faux Internet rituals never prove if something is real or not. There really is no right answer on the Internet as the concept of truth itself becomes an urban legend. Anything is possible, for better or for worse, as anyone with access to an Internet connection can make anything happen. With this film, Schoenbrun is perfectly able to capture our increasingly complex relationship with the Internet, one that keeps us tumbling down a strange rabbit hole.