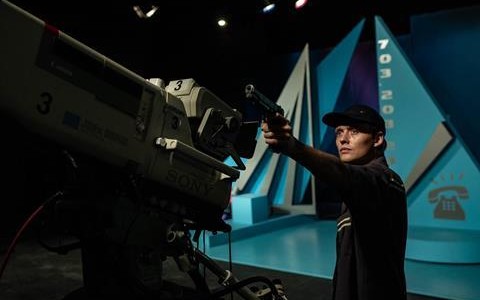 There aren’t many incidences in human history of someone accurately pinpointing a momentous future date or event — there was only one Nostradamus, after all. Yet New Year’s Eve 1999 was one of those dates that gathered a wild storm of credibility around its built-in religious and philosophical notoriety as the end of a millennium, thanks to a fear by many professionals that a computer glitch could cripple the world’s technology, sending us all forcibly into a dark age. While that fear turned out to be unfounded, it was the closest day in our lifetimes to an apocalypse that one could anticipate, giving people the possibility of making big plans, from survival to grandiose gestures. 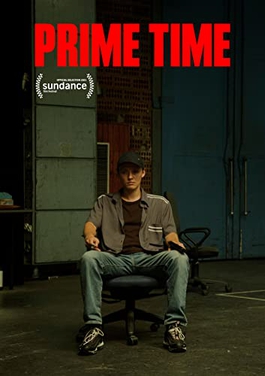 PRIME TIME, the debut feature film from director and co-writer Jakub Piatek, is a story about one such planner, Sebastian (Bartosz Bielenia), who holds a Polish TV broadcasting room hostage on New Year’s eve ’99. With his two hostages — a security guard (Andrzej Klak) and the station’s contest giveaway host, Mira (Magdalena Poplawska) — held at gunpoint, Sebastian demands that the station put him on camera so that he can deliver a statement he’s prepared. Piatek and his co-writer, Lukasz Czapski, are interested in how the late ’90s were just about the last era where a personal statement could only reach a wide audience through mass media, as opposed to the social media of today. They’re also riffing on the global mood of hysteria created by Y2K, giving Sebastian’s goal a greater sense of urgency as well as allowing the government’s response to be more hair-trigger and fearful, taking Sebastian at his word and preparing for the worst.

Piatek’s film unfolds in near-real time, going beat-by-beat as Sebastian seems to methodically cover his bases, the hostages attempt to reason with their captor before attempting escape, and the police try and gain control of the situation. It puts the movie in the tradition of the “hostage film,” more specifically the subset that deal with a political or social theme like DOG DAY AFTERNOON (1975) and the more recent MONEY MONSTER (2016). While the bulk of the movie is spent with its core ensemble, it’s not as much a character piece as it is a thriller, moving briskly from incident to incident. Piatek’s skill is most evident here, as the movie has a fantastic sense of pace, with the tension building so gradually that it’s almost blindsiding when it’s about to explode.

While most of the cast get to have their moment, PRIME TIME is undeniably Bielenia’s film, and the actor seizes the opportunity. Sebastian is the movie’s most dynamic and intriguing character, and Bielenia makes him simultaneously both credibly dangerous and utterly sympathetic. It quickly becomes clear that Sebastian wishes to avoid hurting people at all costs, and yet is firmly capable of such, giving the character and the film a great deal of ambiguity. Unfortunately, that ambiguity is where Piatek and Czapski wish to leave things, as it’s never revealed exactly what Sebastian’s message was meant to be. There are some compelling hints, however, none more so than when the authorities bring in Sebastian’s father, who manages to last through a few minutes of prepared police copy before reprimanding his son and his “life choices.” Combined with an emotional phone call Sebastian makes early in the film, the moment seems to hint at Sebastian being gay, just one of the reasons the young man feels so clearly persecuted.

While those clues are literally all we get from the film, they help support what seems to be the major theme of the story, which is the oppressive nature of the government stifling all individuality. Piatek doesn’t go so far as to make their suppression of Sebastian unambiguously fascist, blending their deliberate attempts to stop Sebastian from going on the air with a ton of red tape and bureaucracy. The film gives the impression that some of the employees aren’t necessarily unwilling to help Sebastian as they are unable, each one — from a station aide to a police chief– having to have their moves approved by a higher authority before anything can be done. While most movies of its ilk tend to involve big melodramatic set pieces and shocking violence, PRIME TIME’s most cheer-worthy moment is when Mira successfully sells a rival TV station on carrying Sebastian’s broadcast. It’s a darkly ironic bit, the movie’s biggest victory coming thanks to pure ratings greed.

It’s a shame that Piatek doesn’t indulge in a bit more melodrama than he does, as PRIME TIME ends with a relative whimper after such impressive build up. The film is an engaging and riveting watch, but one that is too up in the air thematically and subtextually after all’s said and done. It’s an impressive enough debut that makes Piatek an emerging filmmaker to watch, especially if he gets his hands on a script that doesn’t pull its punches. For now, anyway, PRIME TIME feels a bit too akin to Y2K — all bluster with no payoff.