Shark movies are like Tyler Perry movies – even the bad ones make money, so they keep getting made.

I wrote this video about the history of shark cinema. It’s fun and beautifully edited. Plus, there’s one part where a guy in an ape suit wrestles a real shark! Don’t miss out.

During my research I watched dozens of shark movies. (The video features over 70 feature films – see how many you recognize.) And I didn’t get to call out some of the most noteworthy bits. Here, then, is a list of superlative moments in sharksploitation cinema… 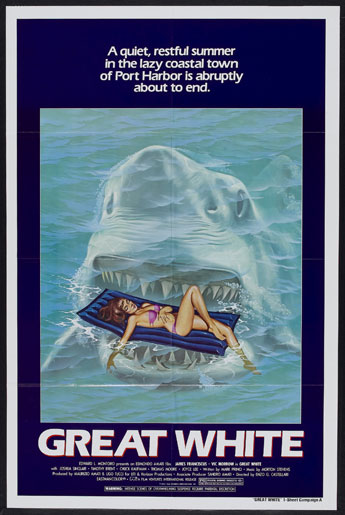 This Great White bobs up to the surface like a bathtub toy. THE LAST SHARK (aka GREAT WHITE) pulled from U.S. theaters because it was deemed “too derivative” of JAWS. The film was released in Spain as JAWS 3.

The sharks got smarterer and ate this dude right after his dramatic speech. (Just like they did with Samuel L. Jackson in the first film.)

Also, I love the legs sticking out of the sharks’ mouth. It’s very ONE CRAZY SUMMER.

Audiences disliked this ending where JAWS is impaled on the boat’s mast. It was re-shot where the shark blows up. (Because that’s what would really happen!) The original ending still airs on cable. Thanks AMC!

The mutant shark spews sludge to remind us that toxic waste is bad.

Best Shark-as-Obvious-Metaphor: FROM THE DEPTHS (2020)

In this indie thriller, the survivor of a shark attack is haunted by bad memories which manifest as a shark. This movie was made for me.

In “The Mystery of the Hollywood Phantom” Nancy Drew is snooping around the JAWS ride when she’s thrust into the water and nearly killed by a tourist attraction. (Don’t worry: She gets rescued by Dennis Weaver, who was on the lot filming an episode of McCLOUD.)

When pharmaceutical billionaire Carl Durant hatches an evil scheme, he thinks no one is watching.

There’s a whole category of campy sharks. Arguably the campiest appears in QUEEN KONG, a gender-reversed KING KONG movie. I don’t have it in me to decide what the campiest CGI shark is.

I’m sorry I didn’t get to experience this scene with an audience. It’s just like that big jump scare in ROSEMARY’S BABY, when Rosemary is on the phone and a pair of Satanists sneak by in the background. I was surprised by how much I liked this sequel.

This summer a shark attacked a parasailer in the Red Sea. Few news outlets reported that Roger Corman did it first, in DINOSHARK.

The more I watch this clip, the more unsettled I am by this underwater pillow creature.

Sure, this is based on the real-life mission to deliver the atomic bomb to Tinian Island in 1945. But it’s also historic as it’s the only shark movie directed by an actor from JAWS: THE REVENGE.

Let’s not forget when Stretch gives Chop-Top a tour of the radio station and she shows off “Mr. Shark.” A nod to the Dickie Goodman novelty song “Mr. Jaws?” Probably not. 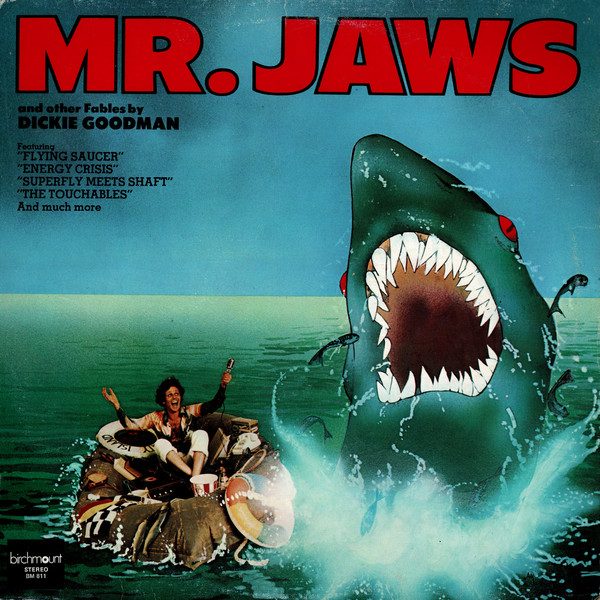 Maybe you’ve heard this story: while filming an underwater sequence, a stunt man named Jose Marco was disemboweled by a real shark and the attack was included in the film. Two days later, Jose Marco died. The whole story was reported in LIFE magazine. But subsequent research shows Jose Marco was never admitted to the local hospital. And there’s no record of his existence. So, what’s worse: including a tragic accident in a film, or fabricating a death to hype the movie?

I’m not one of those lunatics who says JAWS 2 is better than JAWS 1. But you gotta admit, that’s a honey of a fin shot.

Now that I’ve whet your appetite for shark movies, go watch the video. 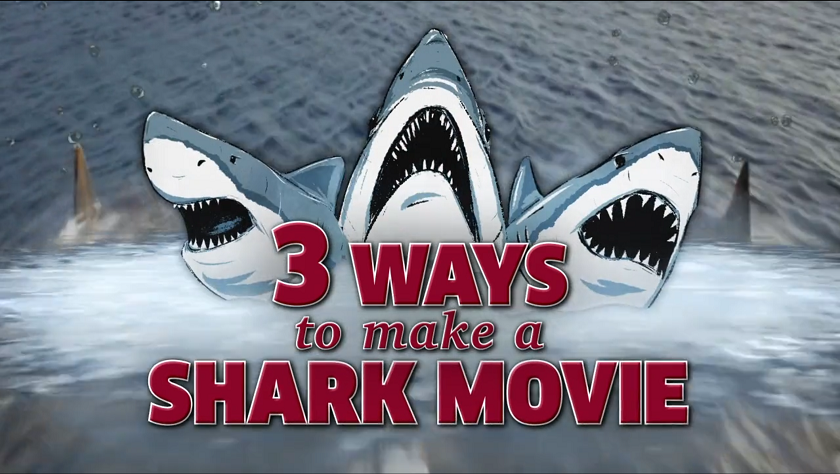