The upstairs projection booth in the 20th Century Twin Theater is the most frightening place on earth. Over a century ago, the cinema stood as a hotel and theater, enticing new arrivals to Juneau, Alaska with the promise of a room in the heart of a booming gold town. As the years passed and an honest-to-God city sprung up around it, the hotel fell on hard times, eventually being sold to a local family interested in using the space as the basis of their new movie theater. Countless rooms were locked and closed off; the downstairs theater became two, with a floor constructed between the ground and the balcony and a make-shift projection booth carved out of an empty hotel room. To reach the upstairs booth, you have to climb a flight of stairs and walk beyond doors that have not been opened in decades. No outside light pokes through the darkness; a single bulb stands between you and a lifetime of nyctophobia.

Needless to say, I loved and hated managing that building in equal measure.

There were times in the early morning, after the rest of the staff had gone home and I stayed behind to work on our newest 35mm film, that I honestly believed the legends that the building was haunted. It is one thing to listen to the dull thrum of the neighboring bar and assure yourself that someone could hear you yell; it is quite another to lock yourself in an abandoned hotel room with the print for DARKNESS FALLS and think yourself beyond harm. Even now, were I to go back to that booth for even an hour, I know I would feel the same fears creeping back in. I may be all grown up but I’m still not stupid.

So believe me when I say that horror films that present shadows as a physical threat really, really work for me. I enjoyed DARKNESS FALLS more than I’d care to admit; I purchased VANISHING ON 7th STREET on-demand and never regretted a dollar; I spent hours playing ALAN WAKE, a popular horror-survival videogame for the Xbox 360, and kept my in-game flashlight fully charged the entire time. I am not afraid of the dark, but when I think back to those chilly nights in the upstairs projection booth, I admit it would be kind of fun if I was.

All of this is to explain why I find myself so enamored with SWEET HOME, the 1989 Japanese horror film by director Kiyoshi Kurosawa that served as the inspiration for an NES game of the same name. I admit that I am not particularly well-versed in Japanese horror; someone described the plot of Takashi Miike’s AUDITION to a younger-version of me and I promptly swore off the entire country’s catalogue for the rest of my life. Still, when I read that SWEET HOME served as the inspiration for the RESIDENT EVIL franchise and was considered an influential – if seldom-seen – mainstay within the haunted house subgenre, I thought I would give it a chance. 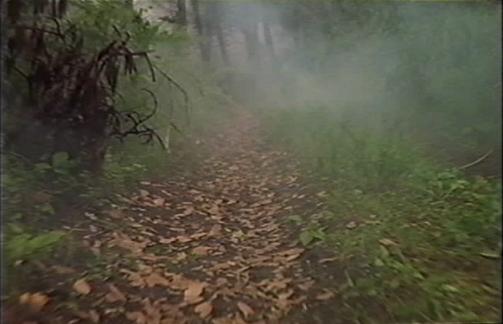 The film opens on Kazuo (Shingo Yamashiro), a curator with an interest in the frescos of Ichiro Mamiya, convincing the property manager of the late artist’s estate to grant his crew access to Mamiya’s mansion. Legends swirl that the mansion is haunted; no man has set foot inside his home for thirty years, but the manager agrees to give Kazuo the key, quietly noting that a rash of supernatural deaths could be good for publicity. Kazuo and his small crew – including his teenage daughter Emi (Nokko) and project manager Akiko (Nobuko Miyamoto) – set up shop in the mansion’s lobby and begin the painstaking process of restoring and cataloguing Mamiya’s unseen work.

At first, everything goes smoothly. Kazuo’s restoration expert Asuka (Fukumi Kuroda) seem particularly interested in the painting of a small coffin and notes that the murals seem to have been altered in the middle of the paintings. Then Asuka begins to act strangely, yelling at the rest of the crew for disturbing even the smallest parts of the room and spending her nights digging in the mansion’s garden. When Asuka unearths a tiny coffin matching the one in the mural, and reveals the charred remains of a young boy, the ghost of Lady Mamiya is released and the very shadows of the mansion itself come to life.

If the film’s first and final acts represented the true talent level of the filmmakers, SWEET HOME would noteworthy as a fine homage to early-80’s horror titles such as EVIL DEAD and POLTERGEIST. Kazuo and his crew are warned by all they encounter to avoid the mansion but push forward as only protagonists in a haunted house can; even when their cameraman Taguchi (Ichiro Furutachi) reports Asuka’s weird behavior and the gaps in her memory, Kazuo treats this as simply the affectations of a true artist. Once the source of the mansion’s evil has been revealed to all, however, SWEET HOME foregoes atmosphere and barrels towards its showdown between Akiko and a demonic Lady Mamiya. This allows the film to show off an impressive SFX department that includes Academy Award-winner Dick Smith and Kazuhiro Tsuji, whose work would later be featured in films such as LOOPER and TRON LEGACY. These sequences are painted in broad strokes, assumedly to broaden the appeal for exhibitors outside the Japanese market. The nice thing about double-takes and wailing demons is that they require very few subtitles.

It is the middle section of the film that set Kurosawa’s filmmaking apart. The confrontation with evil Lady Mamiya does not occur until the end of the film; until then, her presence is felt in the shadows that stalk the restoration crew. “In this mansion,” explains Yamamura (Jûzô Itami),  SWEET HOME’s crotchety answer to POLTERGEIST’s Tangina, “all the shadows and darkness are alive.”  Dark tendrils reach out like fingers and burn their way through a crawling Taguchi; Asuka runs screaming through the halls as the shadows creep behind her, shattering light fixtures in their path. Entire rooms are filled with a deep inky blackness that acts as a barrier to prevent Kazuo or Akiko from crossing the threshold. Should someone try and step into the room, their flesh begins to burn and fall away wherever the darkness has touched it. The survivors are forced to retreat to pools of moonlight and hope that each passing cloud will not deliver them to Mamiya’s grasp. When SWEET HOME focuses on the shadows, it creates an atmosphere of claustrophobia that outpaces many of the films that influence it.

I would love to tell you to look this one up – put it in your Neftlix queue or check for it at your local independent video store – but SWEET HOME has yet to receive an official release for the American market. Worse still, the Japanese versions of the film that do exist on VHS or Laserdisc are not representative of Kurosawa’s vision, as the director lost a creative battle with Itami – part-time scene stealer and full-time Executive Producer– that caused Kurosawa to request that his name be removed from the final product. Thankfully, if you are like me and willing to stomach a VHS rip and poor upload quality, you can find a full version of the film on YouTube. Here’s hoping that some kind soul will eventually find a way to release this film on DVD or Bluray in the United States; it would be a shame if American horror fans were never able to indulge their fear of the dark.

Special thank you to Tom Mes at Midnight Eye as well as Jayson Kennedy at Basement of Ghoulish Decadence and Jamie Christley at TheFilmSaurus for filling in some of the blanks regarding the production history of SWEET HOME.