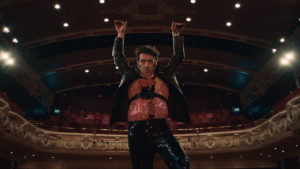 There were a lot of conversations/debates about subverting expectations when THE LAST JEDI came out—some praised the sequel for taking bold strides while others were frustrated by its anticlimactic curveballs. PAUL DOOD’S DEADLY LUNCH BREAK is built on subversion, finding new ways to zig at every opportunity to zag. The result is a brilliant comedy that has a hilarious darkness to it—while somehow remaining a wonderful, life-affirming film. There are a lot of reasons why I wish SXSW Online 2021 were in person, and one of them is to hear a theater full of people uproariously laughing at the macabre turns.

Paul Dood (Tom Meeten) has dreams of stardom that he fans with the help of his devoted mom (June Watson). One day he will ditch his quiet existence of working in a thrift store in the mall to find his rightful celebrity after he shows off his talents on a Britain’s Got Talent-type show. On the day of the big audition, with his mom in tow and his glittery costume sparkling its brightest, he runs into impediment after impediment and a slew of insults and rejections. The next day, Paul takes his lunch break and announces on a popular video social media app that he will seek revenge on all those who wronged him and crushed his dreams.

While it’s patently a comedy, there’s a moment of eyerolling when the overarching plot of PAUL DOOD’S DEADLY LUNCH BREAK becomes apparent. A white dude who feels overlooked is going to take out all of his impotent rage on the world around him is beyond tired and, depending on the week, highly likely to be “too soon” after another horrible tragedy. But therein lies the brilliance of the film from co-writer/director Nick Gillespie (written alongside Brook Driver and Matthew White): it takes a different path to arrive at a facsimile of the destination. It constantly surprises with impressive gore, bizarre characters, unpredictable situations, and more; all without feeling too cartoony or removed from charm. It’s the most delightful of killing sprees, with lots of laughs and plenty of heart.

The cast is a murderers’ row of talent with the likes of Alice Lowe (PREVENGE, SIGHTSEERS), Steve Oram (SIGHTSEERS, A DARK SONG), June Watson (THE DEATH OF STALIN, HIGHLANDER: ENDGAME), Katherine Parkinson (The IT Crowd), Mandeep Dhillon (After Life), and more. But it’s Meeten who shines brightest as he pinballs between each of these entertaining weirdos. Looking like Taika Waititi had a baby with Peter Cook, Meeten is able to play a loser without being pathetic, and he finds a true sense of nobility within this flailing character who has no idea what he’s doing but is oddly committed, nonetheless. The actor is tasked with doing a few buffoonish bits, but it never seems too big or wacky because it all feels of a piece with this overlooked bundle of neuroses and daydreams.

Another “ugh” turned “ohhh” is when Trend Ladder, the livestreaming app, isn’t used as some sort of commentary or really even the misanthropic catalyst that it would be in other movies. In PAUL DOOD’S DEADLY LUNCH BREAK, it’s a way to further the plot but not a way to indict the titular character or even add an unnecessary amount of cynicism to the story. And because it only flits in and out, this isn’t a screenlife picture (UNFRIENDED, OPEN WINDOWS, etc.) that has to find new contrived reasons to capture footage. Instead, DP Billy J. Jackson does a great job making the English countryside look drab to contrast it with the glistening world of Paul’s dreams (and various costumes). The mundane imagery of the town is a great set up for the madcap action without feeling too cookie cutter and staid like so many other comedies appear. PAUL DOOD’S DEADLY LUNCH BREAK has some fantastic cutaways that conjure up MURIEL’S WEDDING, KILL BILL, and more unexpected films.

There are parts of Gillespie’s movie where the audience does know what to expect—but in those rare scenes, it’s simply waiting for the hammer to fall in a fun anticipatory way. Instead, PAUL DOOD’S DEADLY LUNCH BREAK constantly finds new avenues to explore of humor and quirk that never feels condescending to the characters themselves. It’s the revenge of the oddball without making that weirdo a malevolent figure. The audience is rooting for Paul to succeed not because of a vicarious need for victory, but because it’s hard not to applaud this endearing misfit. The same is true for the movie as a whole, too.