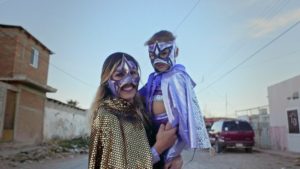 One of the best things about SXSW Online 2021– and all previous SXSW Film Festivals– is that it puts human faces on issues the audience may not necessarily know about. Reading statistics, seeing the names of the dead, footage of the aftermath—these acts all inform people but do very little to make them understand. Some artists express their views about these crises through fictional filmmaking, channeling their emotions into a script and onto the screen. Others capture the world around them in a documentary, listening to the voices and seeing the tears of those who have been most affected by the pains that too many ignore.

That bifurcated world of storytelling can collapse into one in the wrestling ring. The soap operatics and personas are extensions of the dreams and nightmares of the crowd, while the pain and toil of the wrestlers is a very real thing indeed. LUCHADORAS, from directors Paola Calvo and Patrick Jasim, is an engaging documentary that looks at the ways the map and the world cross paths in the squared circle in Juárez, Mexico. An industrial bordertown besieged by murders of and assaults on women, Juárez is also the home to a handful of female wrestlers who are fighting to reclaim their narratives and their city. 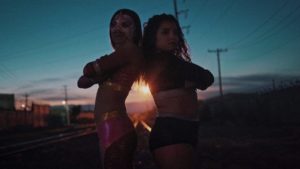 LUCHADORAS is primarily focused on three women athletes at different points in their wrestling careers and their lives. The masked Baby Star is a legacy luchadora, following in the footsteps of her uncles and already having experienced great success in Mexico City—the place to be in order to be considered legit. She moved to Juárez when she fell in love and had a child but is back wrestling once more,  helping her sister enter the ring and caring for her daughter while hoping to return to the big time. Mini Sirenita is a little person who works her long factory days, then walks two hours home, and still finds time to train and compete. She wants to bring a better life for her children and grandchildren, believing the path to that success runs through Mexico City’s wrestling scene. Lady Candy works at a funeral parlor during the day and wrestles at night, quickly rising through the ranks due to her devotion to the craft and commitment to the fights. Her two daughters were taken by their father into El Paso, Texas, which is just over a fence but might as well be around the world– she can’t see them or get them back due to all of the bureaucratic red tape and some patently sexist laws.

All of three have stories of friends they’ve lost—other women assaulted, raped, and killed while the police do nothing and the female body count rises. The horrific conditions in Juárez are fairly well known and have been extensively covered: there’ve been movies made about it, numerous books written on it (Bolaño’s 2666 focuses one of its narratives on the horror), and more. Hell, I personally know two professors that studied the situation and published research papers on it. But when a crisis isn’t solved promptly, it tends to linger and then eventually become background noise that still happens but barely rises or is noticed except for the mourning left behind. The killings never stopped, the police corruption was never punished, the grip of fear was never lifted for women in their own town.

LUCHADORAS does a good job of showing the fear these wrestlers have of this situation. That’s not to say they are cowling and terrified of the outside world, but they have to always be mindful of what is a very real possibility and remember all of their loved ones who have been taken by this grotesque scourge. 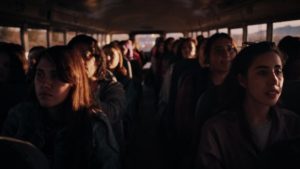 Calvo and Jasim infuse their documentary with gorgeous images—whether it’s the wrestlers in motion in the ring or the natural beauty that can be found amongst the desert, border walls, and industrial structures of Juárez. LUCHADORAS is able to capture these stunning vistas that contrast with the news reports occurring or even crime scenes in the other parts of the film. Even amidst the sorrow and bloodshed, there is something magnificent to behold almost existing in defiance of how the world wishes it to be. The mounting fight for independence from an awful system is matched by the growing prowess on the wrestling mat; the struggle to push back on a world that wants them to tremble is found in their outsized personas unleashing barbaric yawps.

The lone flaw in LUCHADORAS is that some of the conversations feel stilted and forced. That’s not to say the words aren’t true, the sentiments of the speakers aren’t accurate, or the feelings of these women aren’t valid—not at all. But there are lots of moments where someone will say something akin to “you were telling me about that woman you knew…” which just so happens to be a powerful tale and a bit of backstory for the people featured in the film. These parts feel like they are kicked off/fed by the crew. The discussions that happen are real and filled with the true emotions of the speakers, but there is a sense that someone off camera is saying to ask about X, instead of letting the dialogue flow freely. 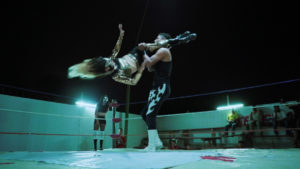 And that’s an odd bit because there are lots of parts of LUCHADORAS that are clearly scripted and prompted—resulting in these badass women assembling and posing for the camera, ready for the next battle. This is a blatant bit of the filmmakers to show that these ladies are crafting their own narratives and lives and it’s incredibly effective. It stands to reason that showing the prompts on screen or just having a director ask from off-camera would work as well. It also would go along with the kayfabe blending of reality and fiction that comes with every good pro-wrestling scene.

LUCHADORAS is a gorgeous and moving documentary about a terrible situation that has gone on for far too long and continually falls under the radar far too often. The collision and parallels between the internal struggles, external battles for accomplishments, and hardcore matches make it land hard and stay with viewers. It does this without being cacophonous or heavy handed, instead subtly combining the realities of the world with the empowerment in the ring. There’s a scene where a crowd is watching police cordon off a crime scene for a corpse they just found. As the crowd looks on, they start to wonder who puts the sheet on the woman—for that matter, who puts the sheet on all these women found on the street? It’s a surreal moment of Seinfeld-level discourse about mundane etiquette, but in this case the mundane is terrifying and tragic. LUCHADORAS walks between two worlds to show how our pain can inspire incredible things and how escapism can fuel strength in our lives.