There are a number of articles online about men, women and children who wander into national parks to take in the beautiful sights and sounds of nature, and are never seen again. It could be that they ventured off a charted trail onto an uncharted one and came face to face with the innumerable number of predators, human or animal, that lie in wait amongst the brush waiting to pluck a person from their mortal coil. Or maybe, while climbing to the peak of a ridge or mountain, they made one small miscalculated step and fell off, crashing and bashing into the rocky terrain below. And what if while on their daily tasks, a park ranger stumbled upon one of these bodies, and to the naked eye, there was no clear indication of who this person is, how they died, or if the thing responsible for their death is still there. This is the killer hook to Roxanne Benjamin’s full-length feature debut, BODY AT BRIGHTON ROCK, which stylistic choices aside, amounts to a solid concept in search of an execution. 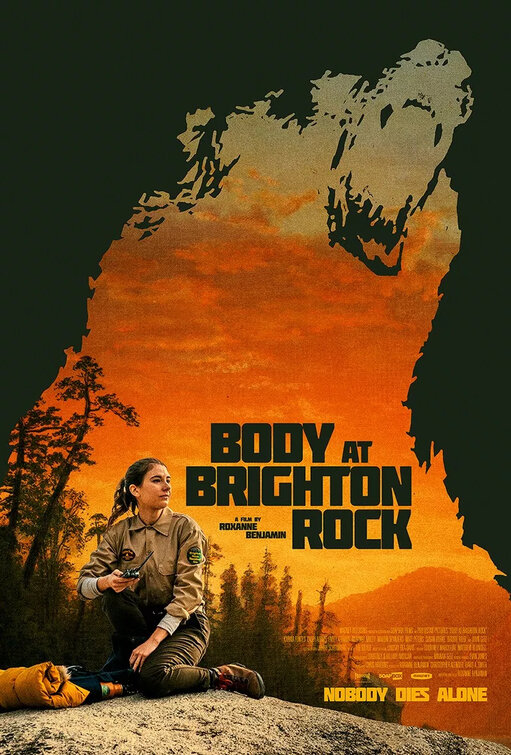 The plot of BODY AT BRIGHTON ROCK concerns novice park ranger, Wendy, who decides to work on a difficult trail in the national park, rather than her usual kiddie trail and stumbles upon a dead body, having ventured off into an uncharted part of the forest. Her phone dies, her radio shatters (through a ridiculous circumstance), and because she’s in a part of the forest that’s not really known to anyone has to wait out the night waiting for help while watching over the mysterious titular body to prevent any potential passersby from contaminating the crime scene. Soon, a mysterious stranger shows up, and with warnings of vicious wildlife in the area, Wendy must hunker down with a cold corpse as her only companion once the sun starts its descent.

The film starts out strongly with great, wilderness photography and any movie that features my beloved Oingo Boingo (“Dead Man’s Party,” specifically), let alone the opening credits, automatically starts me out in the right frame of mind. Since, it’s really a one-woman, mostly dialogue-free show, you need a strong actor to take the reins and guide the audience along the journey and Benjamin has that in her Wendy, played by Karina Fontes, who in addition to being stunningly effervescent, imbues the role with just the right amount of breeziness (the scene where she dances along her trail in the park, while hanging flyers and listening to music is charming) and makes her naivety believable. The rest of the actors are commendable, but are barely in the film enough to register, though that’s more the nature of the plot than anything else. The cinematography by Courtney Getz is terrific, capturing the intensely photographic wilderness with a keen eye, especially in the nighttime sequences. The body itself is a meaty, grotesque concoction, just gruesome enough to be realistic, and to Benjamin’s credit used sparingly so as to maximize its creepiness.

The film’s grave missteps start with the beginning of the film (technically it starts with the title, as the body isn’t even AT Brighton Rock – though that’s the name of the national park, so ehhh) as the font and scores evokes a Western (the music by The Gifted does grants us a nice horror score once the more traditional genre elements set in) though the actual genre tag is thriller (I’ve seen a lot folks label it horror, including the person introducing the film – which is definite mis-genreing), and sets off the misguided tone from the start. For starters, the film takes too long to get to its main plot, the discovery of the dead body which wouldn’t be a problem if that time was used to set up the film’s mystery. Instead, the film uses the first part to set up how thunderously out of her element Wendy is, which again would work if the film used that as a through line and had her become a stronger ranger as the film progresses, but it doesn’t. She ends the film almost exactly as she does at the beginning, though the film would want you to think that grown out of her greenness, because it’s what the script calls for, but there’s no sense that that’s what the character has done even as the film ends. In other words, she comes off as a changed woman because I’m told that, not because I’ve seen that.

Unfortunately, it flatlines right when the EKG should be spiking by rushing through what should be the best part of the movie, which is being forced to stay in close proximity to a mysterious corpse in the dark, dark woods. When you have a sole character stranded alone, the director can use the silence, the ambiance of the forest to create a sense of isolation, fear and claustrophobia (somewhat, since Wendy can’t leave the area surrounding the body).One can play effectively on fears of being alone, and fears of being confronted with death. Instead, the film resigns itself to scaring you with the easy catchall of SCARY! LOUD! NOISES and flashy, quick cuts that serve as cheap jolts rather than unsettling scares. It also reuses the same scare twice, both to no consequence – as they’re just dream sequences. The most effective sequence is where Wendy investigates a tent that previously housed our unknown corpse, because it feels tense, but that sort of stuff in the film is criminally underused. Similarly, a last act battle between our heroine and a bear feels low-rent (I cannot knock it entirely because it takes such guts to stage something like this on a minimal budget), coming off as unrealistic and hokey, rather than ferociously frightening. It’s also out of nowhere, as if the film needed just a smidge more conflict to make up for the listlessness of the film thus far.

I won’t spoil the details of who the titular body, but it’s a crucial gaffe that mortally wounds the film right at the finish line. The climax resolves around a “twist” that isn’t earned in the slightest. The way to execute a successful twist is burying breadcrumbs through the film, so that an audience member may revisit it and parse through the way the filmmaker has pulled one over on you. There’s no buildup to the twist, save for one scene that is meant to be crucial, but doesn’t feel like a key to solving a mystery (hell, it even feels like another attempt at setting up a sense of suspense – which it doesn’t). This twist is a cheat because there’s simply no buildup to any of it at all. It happens, you cannot believe it’s happening, then it happened. There’s not even an attempt at explaining how it happened, or why (other than flashbacks, but that presents nothing new that we didn’t already know – in fact, it actually presents more questions than answers). Christ, the resolution of the film (meaning the moment before credits roll) is so abrupt, it’s akin to a social encounter with a person where they walk off in the middle of you getting out a sentence when you think that there’s going to be a conversation happening.

It pains me tremendously to tell you this film doesn’t work. I had high hopes based on that stunner of a concept, in addition to Benjamin’s pedigree that she earned while cutting her teeth on her previous horror anthologies, SOUTHBOUND and XX. But unfortunately here, BODY AT BRIGHTON ROCK seems to have been better served as a strong anthology entry than a feature length film. I cannot though, wait to see what Roxanne Benjamin does next.