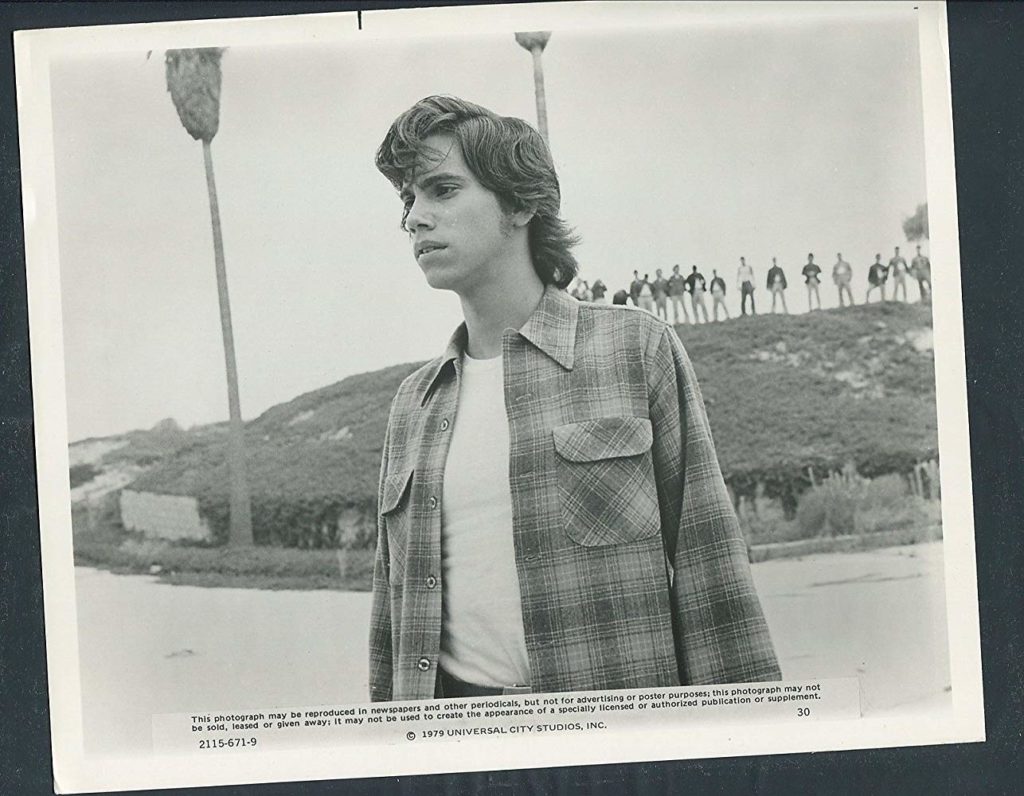 For a healthy run throughout the decidedly anti-healthy 1970s, the Dallas-born, NYC-reared teenybopper supernova Robby Benson starred in a succession of largely successful puberty-focused productions on screens both big and small.

He specialized in roles that made fine work of his delicate frame, helium voice, and perpetually about-to-well-up baby blues. Some Robby movies were serious, some were light-hearted, and in all he exuded a glow of huggable bubblegum hotness that supplied junior-high girls (of every gender) with incalculable cases of the vapors. 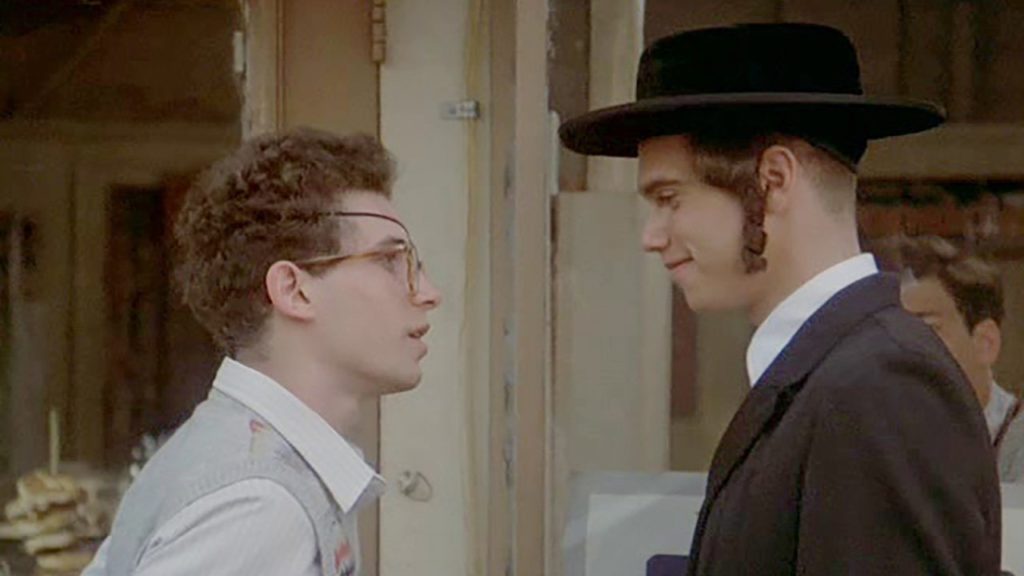 In fact, at his peak, Robby’s planet-spanning teen idol popularity is said to have likely cost him in the lead of STAR WARS (1977). Thus, it’s mildly surprising he’s so completely forgotten as an actor today.

Despite missing out on all that Luke Skywalker gelt, though, Robby’s apparently cool with having shifted behind the camera in the ’80s. He’s enjoyed prolific career as a director and producer, particularly on TV, and he’s always been the official Beast voice of Disney’s BEAUTY AND THE BEAST in all its myriad incarnations. So he and Luke Skywalker ended up working for the same boss, after all. 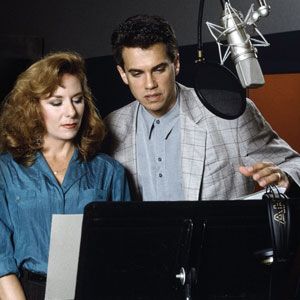 So while Robby Benson never made a teen sex comedy proper, he’ll always be a high prince of Teen Movie Hell. Here, let us salute him, film by film — with one spectacular final digression. 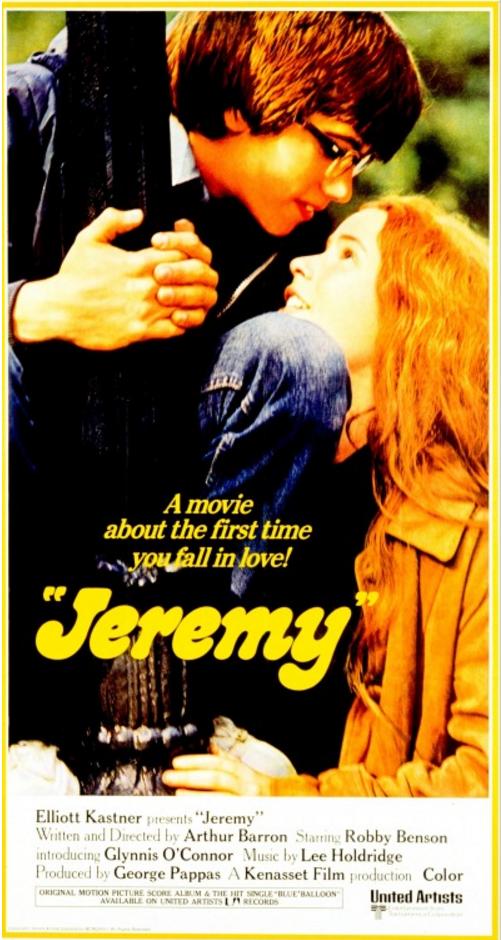 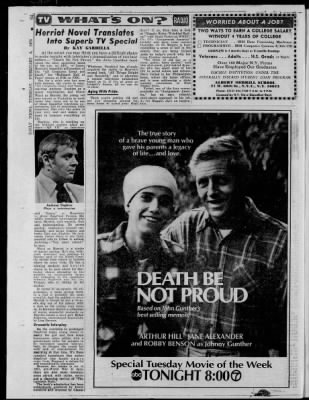 Robby gets brain cancer in one of the key TV-films that developed the notion of “Disease of the Week Movie.” It’s sad. 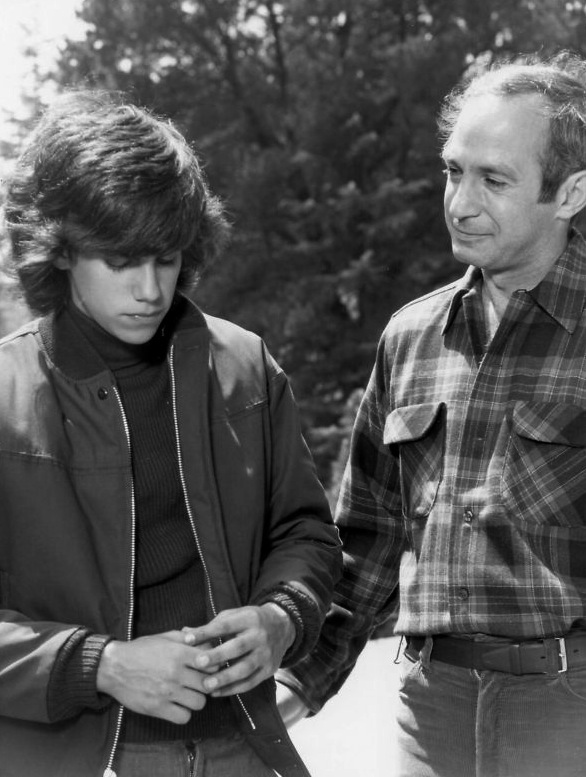 Robby plays Richie, the teenage dope fiend son of raging hothead pop Ben Gazzara. Drugs eventually kill Richie, but not directly — his final goodbye happens by way of his flustered father’s furiously discharged shotgun. Pow! Right in the pretty-boy kisser! Awash as it is in forehead-vein-popping rage, THE DEATH OF RICHIE may be the loudest TV-movie ever made. It also stands, above all other media except Danny Bonaduce sparring with Dave Madden on THE PARTRIDGE FAMILY, as what Vincent Gallo credits with inspiring him to take up acting. 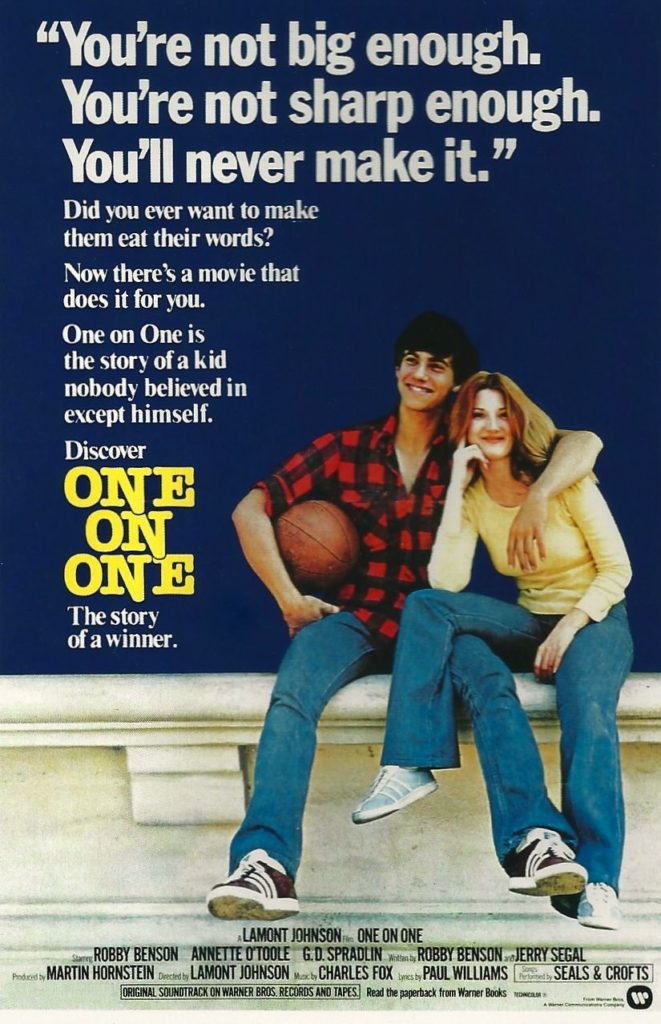 Annette O’Toole steps into the Glynnis O’Connor role as Robby goes to college on a basketball scholarship. ONE ON ONE was a relatively big summertime hit just as the dopey space adventure Robby missed out in was redefining the parameters of what constitutes a “hit.”

Today, ONE ON ONE remains a fine, likable sports drama and evidence how it seemed somehow difficult for anybody to make a bad movie in the ’70s (prior to that dopey space adventure ruining everything for everybody forever).

Robby’s “take this scholarship and shove it” denouement remains an affably shaggy, all-American take on the surprise climax of THE LONELINESS OF THE LONG DISTANCE RUNNER (1962). But — despite what Robby’s voice might imply — with balls. 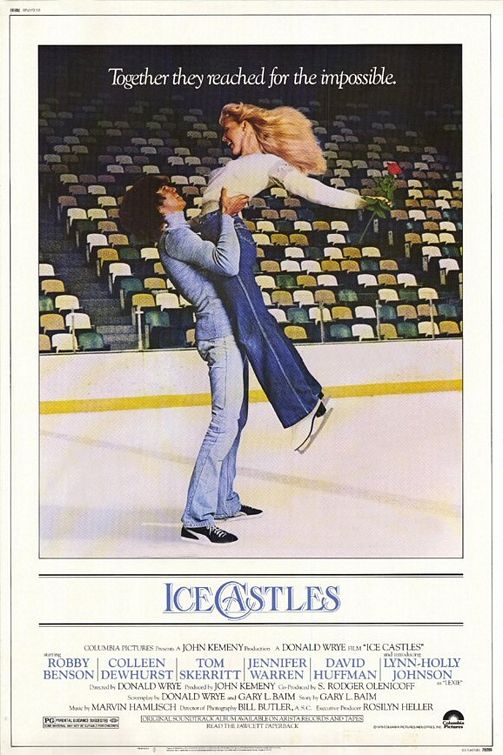 The greatest blind figure-skater melodrama ever made, featuring one of the all-time gold-medal tear-jerker theme songs in the form of “Through the Eyes of Love,” composed by Marvin Hamlisch and performed by Melissa Manchester. Prepare to weep icicles.

If any loudmouth ever suggests that the lousy likes of I, TONYA (2017) might be superior to this flawless concoction of frozen schmaltz, you should speed-skate right over their bare pinky toes. 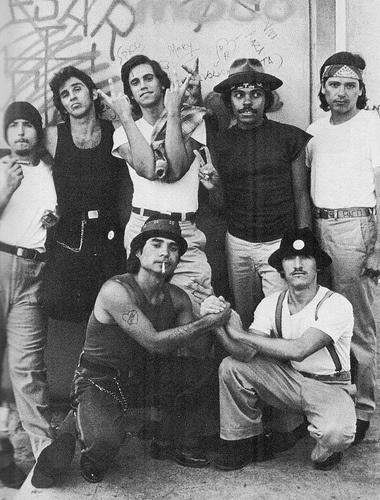 ¡Dios mío!, did Robby’s hot streak screech to a halt here. In what seems to be almost malicious miscasting, he stars as a member of the Aztecas, an East L.A. Chicano street gang. Peligro warning: He dons brown face, mijos. 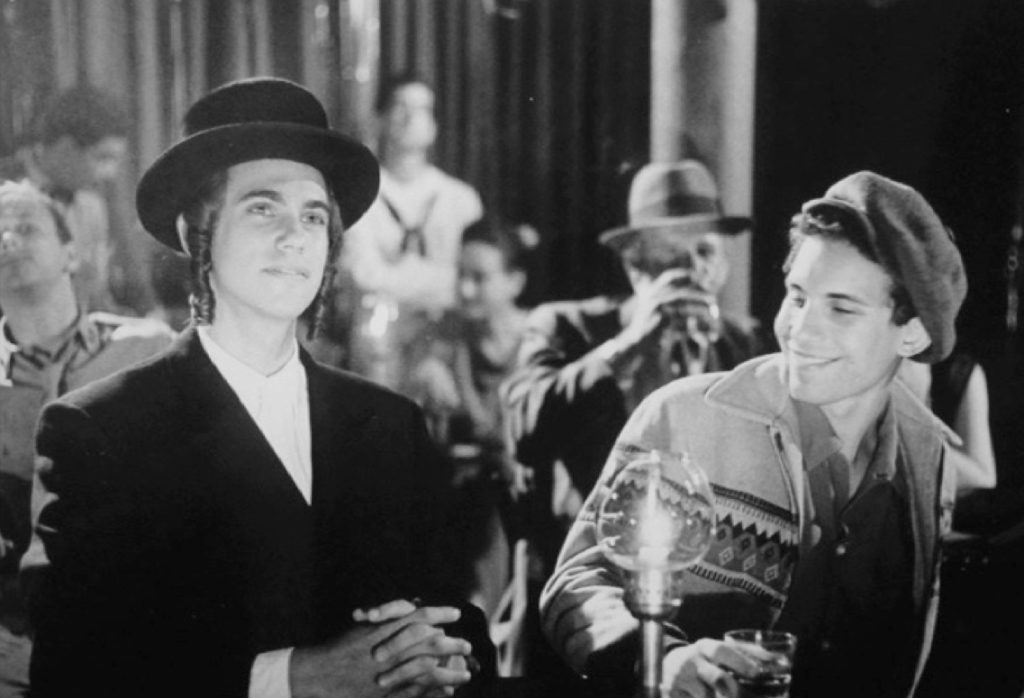 Robby’s final coming-of-age epic takes place in post-WWII New York. He plays a Hasidic Jew who befriends Barry Miller as a Modern Orthodox Jew while their fathers sneer at one another.

And now, a very special ode to ODE TO BILLY JOE: 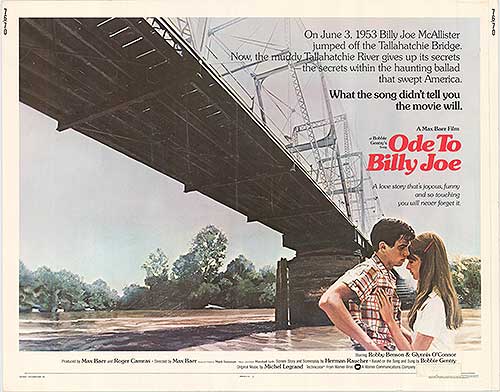 Bobby Gentry’s classic 1967 Southern gothic ballad of the same name inspired this surprise box office bonanza and it supplies an even more surprising answer to that spooky ditty’s central mystery — namely, WHY did Billy Joe McCallister jump off the Tallahatchie Bridge?
While many concluded that a teenage pregnancy and perhaps infanticide motivated Billy Jo’s fatal muddy plunge, the movie poses that the rural Mississippi lad couldn’t handle [SPOILER ALERT] being homosexual. That’s true. So is everything else I’m about to share with you.

In 1980, ODE TO BILLY JOE aired in primetime as the NBC Movie of the Week. And I was there.

For the first 45 minutes or so, I enjoyed the film’s drive-in dynamics and earnest depiction of teenage romance budding in 1953 between rural teens Billy Joe McAllister (Robby Benson) and Bobbie Lee Hartley (Glynnis O’Connor). They go to school, work the fields, get itchy during church—all the usual Eisenhower-era cracker country business.

Of course, then, it’s a whole hootin’-and-hollerin’ to-do when a traveling carnival rolls into town to break the day-to-day boredom with games, rides, attractions, snake oil pitches, full-band musical jamborees and all the rootin’-tootin’ like.

In such a milieu, it’s only natural that Billy Joe takes his first serious nip of moonshine and starts to feel a mite funny. It’s to be expected, as well, then, that he’d take up the local saw mill on an offer to step away from the action for a moment to catch a breather behind a tent.

What I did not expect, though, was to see Mr. Saw Mill bend Billy Joe over a log, yank down his overalls, and pound away at our hero like one of the prize stud-bulls over in the 4-H showcase.

Now to be clear: the carnival-ground sodomy in ODE TO BILLY JOE is entirely consensual. Billy Joe only momentarily resists his own desires, but then he finally eases up and opens wide for what he’s happy is coming his way.

I couldn’t believe this was all going down right before my eyes! How could this be on television? What kind of lawless reality had just overtaken everything I had ever known at that point from seven long years of Catholic school?

Following that excitement, the movie shifted back to its slow-cooked honey-ham pace, but it dipped even deeper in melancholy once Billy Joe grapples with how much he enjoyed getting split by the saw mill owner until, in a sad surrender to internalized homophobia, he uses the Tallahatchee Bridege as a final launch-pad.

For years, that memory existed inside me as one of the damnedest things I’d ever witnessed on a black-and-white screen in my parents’ living room. I never saw the movie again, but I certainly discussed how it diluted some of the song’s mysterious power by providing Billy Joe with knowable motivation — even one as unexpected (for the time) as him being gay.

Flash-forward to 2010, thirty years after the one-and-only time I wated ODE TO BILLY JOE. I noticed the movie available on YouTube, and I asked my wife if she’d ever seen Robby Benson’s down-home all-male sex romp. She said no, so we suffered through the entire crummy YouTube transfer, only for it to end with me saying, “Dammit! They cut out my favorite part!”

In frustration then, I bought the DVD, and discovered that it, too, seemed to have been shorn of any backwoods from-behind banging. The time had come, at that point, to conduct some research.

What I found out is this: Yes, ODE TO BILLY JOE contains a key moment where Billy Joe wanders off with the closeted wood peddler and the plot makes clear they have sex, but in every version of the film to ever exist, the scene ends there.

After the carnival encounter, Billy Joe disappears for a spell. Upon returning, he confesses to Bobbie Lee that he and the local lumber kingpin had gotten it on, and it felt right and proper. As a result Billy Joe has to concede that deep down, in the exact spot where he can feel it most, he’s primarily attracted to men. Then Billy Joe kills himself and it’s a tragedy and the song plays.

That imagery actively resided in my DNA as a hot, hard fact for more than three decades. And it’s not like I was five or something at the time and couldn’t process the visuals. I was TWELVE!

To be sure, I was smut-obsessed nut even at that young juncture, so it figures I’d fill in below-the-belt blanks that nobody else even knew existed. Still…

In retrospect, I believe that implanted memory speaks volumes as to the power of ODE TO BILLY JOE director Max Baer Jr., who remains best known for his uproarious portrayal of bohunk bumpkin Jethro Beaudine on the classic cornpone sitcom, THE BEVERLY HILLBILLIES.

That hick was one FUCK of a filmmaker.