For as long as there have been movies, the marketing for films has always contained more than a hint of hyperbole. With the advent of cinema, audiences were promised sights and experiences they had never known before. Every film student has heard about how some viewers fled in terror when the Lumière Brothers screened their short film of a train arriving at the station. That word of mouth hucksterism has been a part of advertising for film ever since — made especially more noticeable when it comes to genre entries. Studios and filmmakers have often promised that their horror movies would be the scariest event ever witnessed by people. In the ballyhoo era of William Castle, the filmmaker would boast that people should sign away their rights if they got to frightened or had a heart attack. Even now, when RAW and other modern horror films come out, it’s usually accompanied by tales of attendees fainting or throwing up because the movie was just that terrifying. But something has started to transition in film culture, where the hyperbole has left the purview of the filmmakers and now become a large part of the discourse of critics.

With an abundance of sites and sources of film criticism and opinion, the pressure is on writers to make a mark and stand out. Such a skew in supply and demand threatens the possibility for subtlety and nuance. If a critic really enjoyed a film, despite some flaws, he now has to LOVE IT, proclaiming it a bold new direction for the medium. If a writer doesn’t like something despite some positive elements, she now has to HATE IT and talk about how terrible it is. Those middle ground opinions are fading away as everyone must be the most impassioned to make a dent. And that’s not to say that every critic heaping praise or scorn on a movie is disingenuous; but it is a rising concern within discussions about film where only the loudest and hottest of takes make a dent in people’s consciousness. As Assistant Editor Mike Vanderbilt likes to say, “hyperbole hurts horror.” Some writers, hoping to be quoted or retweeted or just make a splash, drum up new releases as the scariest thing ever (or since THE EXORCIST, which is apparently the benchmark); then, when audiences go and discover it’s not, or it’s not what they were expecting, bad word of mouth spreads about the film as expectations are missed and the experience isn’t what they had in mind. This isn’t a call for people to be less passionate in their writing, less effusive in their praise, or anything that genuinely reflects how they felt. But it is a strong suggestion that, when it comes to horror specifically, critics try to be more measured in their approaches. 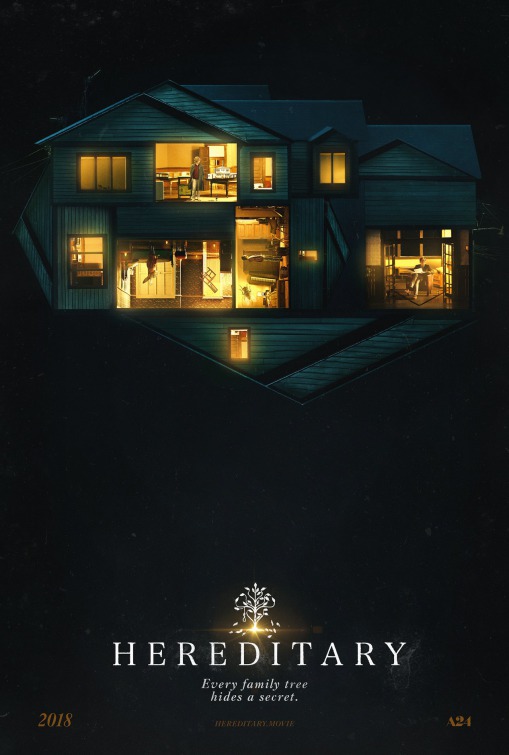 This is all a long way of saying that HEREDITARY arrived at SXSW 2018 as one of the most hyped films of the year. Coming off of an incredible reception at the Sundance Film Festival and a very enticing trailer, writer/director Ari Aster’s feature debut had everyone abuzz about how intense the film would be and led to hundreds trying to attend the midnight screening. Many people were turned away as they wished to be one of the earliest audiences to experience this bonafide phenomenon first hand. After the screening, listening to people discussing HEREDITARY, it clearly struck a real chord and many found it incredibly compelling and eminently horrific. The tweets and reviews came out proclaiming it the scariest movie in a long time and that audiences will be terrified. It’s weird to be surrounded by that much praise and see people affected so much, and to simply feel that the film… is fine. Perhaps it’s a case of heightened expectations, or maybe it simply didn’t connect, but HEREDITARY is a mostly well-made film featuring strong performances, excellent cinematography, and a clever concept. It relies a lot on sound scares to startle audience, and the plot quickly unravels into a mess once viewers start pulling at the threads; which ultimately makes it hard to scare or stay with audiences after the credits have rolled.

Annie Graham (Toni Collette) is laying her mother, Ellen, to rest. A private woman with secrets and emotional issues, Ellen’s death has vastly impacted Annie and her family. Her husband, Steve (Gabriel Byrne), is trying to be supportive as his wife tackles yet another family loss. Annie’s daughter Charlie (Milly Shapiro) is grappling with mortality and the loss of a matriarch who truly cared for her. Meanwhile, Peter (Alex Wolff), Annie’s eldest, is weirded out by the events but is simply trying to be as normal as possible in high school. Annie learns more about her mother, and struggles greatly with being the only one left alive in her immediate family, when a horrible tragedy strikes the Grahams. As grief spirals into resentment, and the sinister beliefs of Ellen become uncovered, the Grahams try their best to navigate unexpected waters that threatens to tear them all apart. 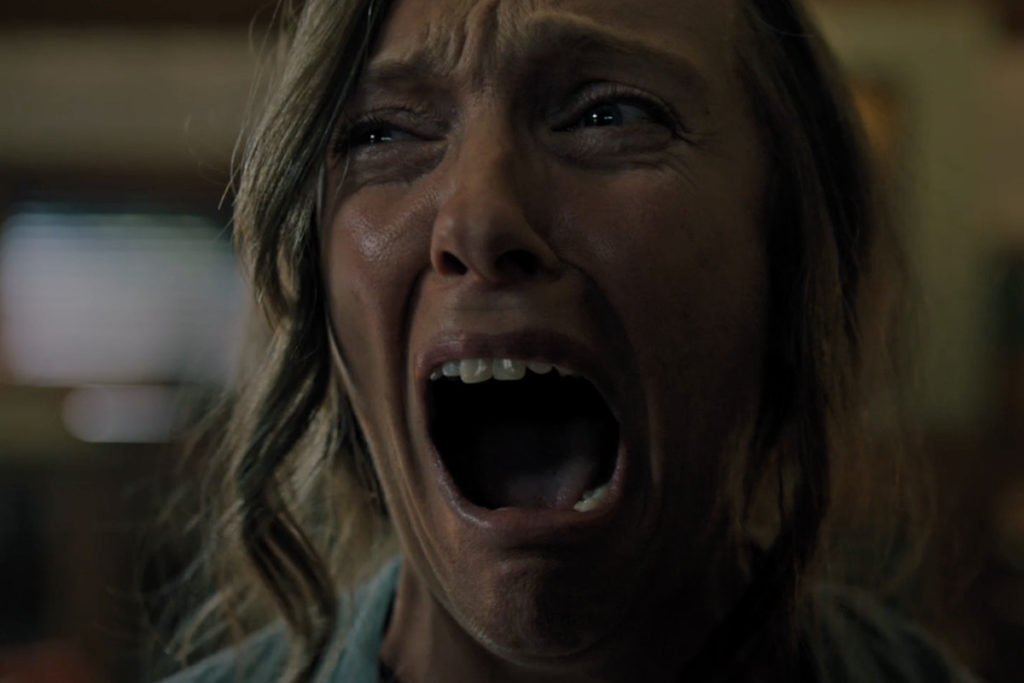 HEREDITARY is a great concept for a horror film. The idea of the sins of parents being revisited upon their descendants is nothing new — it’s literally the plot of a ton of ancient Greek tragedies — but to make those echoing issues reverberate using the genre’s trappings is a clever conceit that opens up for a lot of exploration. The entire cast is excellent as they show the way that grief infects and how it can turn into something more and something worse. Writer/director Aster shows a deft hand at constructing this story and conjures up some lasting imagery that, even without context, may produce an emotional reaction. The issues with the film are twofold in its execution in the micro and some of the themes in macro.

In terms of executing, it is blocked and shot well, with Aster giving a very strong sense of place and surroundings. The color palette makes it all seem dour but also benign in that pastoral way, suggesting that all is not well beneath the surface. HEREDITARY is a slow burn though, building up odd incidents and creepy moments before an explosive finale. The problem lies in that it repeatedly uses orchestral stings and other loud noises to induce a sense of startling, rather than simply letting the tension mount until it boils over. These jump scares feel like a need to reinforce to audiences that they should be scared, rather than simply trusting them to give in to the narrative. But, given the ultimate reveal of the film, perhaps that’s not a good plan either. Because, while films don’t have to be a straight line from Point A to Point B to be good, there are a lot of convoluted steps that need to be taken once the truth is revealed. Like Luthor’s plan in BATMAN V SUPERMAN: DAWN OF JUSTICE, or Zemo’s scheme in CAPTAIN AMERICA: CIVIL WAR, the machinations at work need a lot of intermediary and random steps that really don’t make sense and are part of the plot as an excuse for another creepy image or sequence.

The macro issue is one of themes. It appears for a while that the movie is interested in exploring the hereditary angle of mental health. How what people inherit from their family isn’t just external values or customs, but also an internal legacy of psychosis and neurosis that lingers far past when they are gone. That’s a very intriguing angle to take, and works well within the confines of Aster’s concept. But in execution, the mental health angle is either dropped or married to an occult element; meaning that those with mental illness are quite literally demonized in the plot. That’s a very muddled message and HEREDITARY seems to want to take on a weighty subject matter, but then ultimately has nothing to say about it. 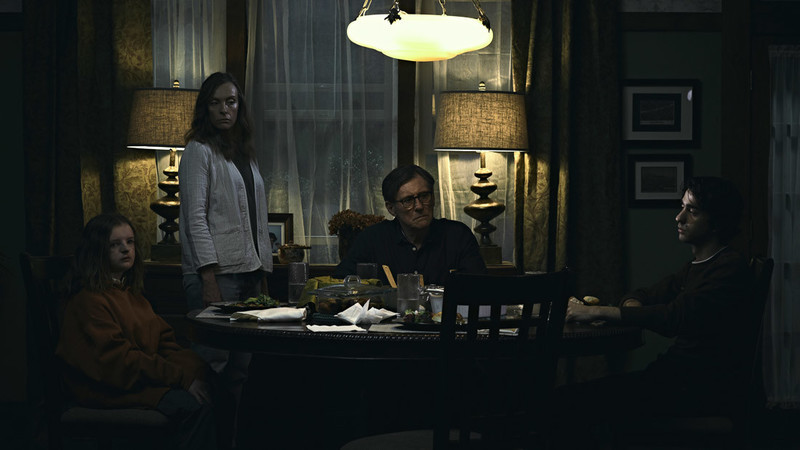 It’s always a weird phenomenon when likeminded people love something, but one finds oneself not feeling the same. Concerns of being a curmudgeon or a stick in the mud, or maybe just not “getting it,” creep in. The critics that are heaping praise on HEREDITARY are most likely genuine and truly found themselves scared by Aster’s film. And while there are a lot of good elements contained within it, and there are effective scenes and sequences throughout, the movie never comes together as a whole to be truly unnerving. The comparisons with much more powerful films or boasts of how scary HEREDITARY is do it a real disservice. Those expecting a film that will haunt viewers for many nights afterward may be disappointed when instead they find a slow burn with an over-the-top ending. Hobbled by a lack of cohesive narrative execution, Aster has ultimately made a very strong debut that shows a great talent for filmmaking, but  one thatwould do with some refinement on the script level.