For a long time, cult films were those that weren’t initially successful, financially and/or critically, but which, over time, time naturally attracted audiences that loved the misfit movie without any coaxing by studios, influencers, or the like. While every filmmaker would love to have a group of devotees praising their work and keeping it alive over decades, most of those artists would have also appreciated a more immediate success upon debut instead of waiting for vindication in some nerdy “Best Of” list or documentary. These days it seems that viewers– including critics– rush to claim that something is an “instant cult classic”—a bizarre pull quote that tends to be damning with faint praise.

It’s a phrase that tends to be used when films are a bit weird in a way that most titles around it aren’t; but, it also brings a connotation that the movie will probably not do well at first. The invitation is for others to get on the ground floor so– in their best hipster voices– they can say they were into it before it was cool. There’s no way of knowing what will linger in pop culture relevance twenty years from now. Most things that don’t fit the mold and don’t do well simply vanish into obscurity with no one to champion them. THE SPINE OF NIGHT is a new animated film, premiering at SXSW Online 2021 that feels like the filmmakers specifically aimed for this to be enjoyed by a passionate few, at first, before amassing its own following as a handshake movie that supporters mention to show that they’re hip. Unfortunately, it’s not vibrant enough to immediately catch on with anyone but a very few stalwarts, but perhaps an inventive cult can find ways of improving that. 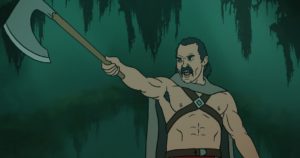 In a faraway land, a lone, armored Guardian (Richard E. Grant) is assigned to protect a glowing blue flower from all who seek it. His solitude is interrupted by some sort of priestess (Lucy Lawless) who carries her own blue flower. She then regales the world-weary Guardian with a tale of how her tribe was overtaken by forces of a petulant Prince (Patton Oswalt), how the blue flower was stolen by a cleric, and how that began centuries of bloodshed and ruin for the people of the land. But now, on this snowy mountaintop surrounded by darkness, there’s a chance that all of that tragedy can come to an end.

Written and directed by Philip Gelatt and Morgan Galen King, and based off their short film EXORDIUM, THE SPINE OF NIGHT is an impressive work with clear influences that never feels like a knockoff. The rotoscope animation clearly evokes Ralph Bakshi, with a lot of the backdrops and coloring specifically looking like nods to FIRE AND ICE. There are also elements of 1987’s GANDAHAR (aka LIGHT YEARS) and HEAVY METAL in the movie due to the epic nature of the tale that spans centuries and vast distances, all around a specific magical MacGuffin.

There’s a lot to love about SPINE OF NIGHT. The throwback designs feel more alive with personality than what’s found in most CG animations. Rotoscoped action is always a bit awkward to the eye at first, as it lacks the complete fluidity of controlled movement found in most drawn films; but that also immediately sets it apart and imbues it with the strange energy that helps propel the strange fantasy story. There are a lot of impressive moments of gore and violence that haven’t been seen in most hand-drawn animation for many years, and with a commitment to brutality not seen since NINJA SCROLL. But these bursts of viscera and combat never feel like dark edgelord stuff meant to “blow your mind and change the way you think about cartoons, man!” Instead, this element of SPINE OF NIGHT feels like a throwback to the attempts at aiming animation at adults in the ‘70s and ‘80s. This isn’t meant as a shock so much as a reminder.

There are also a bunch of dope visual touches which tip their hat to artists like Frazetta, Moebius, Richard Corben, and others. Images that would be at home in a Dungeonmaster’s playbook, a black light painting, or on the side of the finest of vans parade through SPINE OF NIGHT—eldritch horrors, armored nightmares, bird people, burning forests, cosmic wonders, and more add to the retro feeling of the time when Fantasy and counterculture entwined (inspiring generations of Tolkien devotees and knockoffs).

THE SPINE OF NIGHT’s greatest issue is that it feels like the penultimate edit of the film. Some of the sequences go on far too long, making the viewer feel the passage of time in the story. And it’s impressive to have such a large cast of characters (there are dozens of speaking roles throughout its 93 minutes—including by such folks as Patton Oswalt, Joe Manganiello, Larry Fessenden, and more) but that, along with the anthology element of surveying how the flower has impacted people for many years, mean there’s no central rudder guiding the story. That drifting through the lives ruined by the flower leads to some touching moments that are outside the main thrust, but it also leads to a lack of main thrust to push audiences through its narrative. 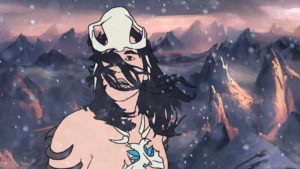 The score by Peter Scartabello isn’t bad, in fact it’s quite rousing in some places. But this is a movie that begs for some prog metal or some sort of dissonant addition. Throw on Mastodon’s score for JONAH HEX or a few songs from Coheed & Cambria’s Keyworks Saga and suddenly it becomes a lot more engaging. If one wants to make this an odd throwback melding all sorts of influences, then the audio component is a major one that would benefit greatly from more experimentation with doom metal, odd ambient sounds, and more. There are also a few visual elements that needed refining—as in the finished product is a bit muddled instead of as striking as they should be. Some of the designs are inspired, while others feel like placeholders that were never completed or touched up again.

THE SPINE OF NIGHT may very well be headed for cult status. It’s in a medium and genre that rarely gets mainstream success unless hundreds of millions of dollars is thrown at it. The violence, nudity, and horror elements create a disparity for most audiences that aren’t used to seeing such things in animated fare. But its meandering narrative and lack of pithiness makes it hard to fully embrace or champion. Hopefully, when it arrives for others to see, some cultist will take up the task of creating a new edit that will become its own samizdat passed around in film nerd circles in order to grant the infamous immortality the movie clearly seeks. But perhaps a couple of decades will prove me wrong.