Boogeymen have haunted horror since time immemorial. They’re perhaps our most elemental fiends: shadowy, malleable “others” hailing from the nether-reaches of our unconscious, avatars giving form to our most inexplicable fears. Their elusiveness makes them frightening and compelling in equal measure: a boogeyman exists in the space between fact and fiction, that purgatorial plane of urban legends. I think this is why they’re most powerful when we’re children, when we’re most inclined to believe they’re out there, lurking. And we don’t want to see them, yet we can’t completely ignore them, either — this is the ultimate paradox that allows boogeymen to lurk in perpetuity. We can’t resist a good scary story, especially one that taps into and gives a face to our most primal fears. 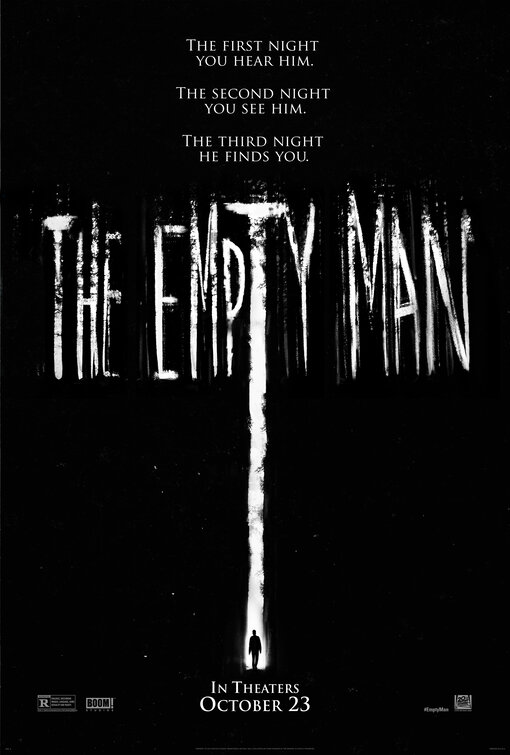 With THE EMPTY MAN, director David Prior has plucked the latest cinematic boogeyman from the pages of Cullen Bunn and Vanesa R. Del Rey’s graphic novel, conjuring him into an audacious adaptation that treats urban folklore like epic poetry. The titular, mythical entity haunts across time, distance, and maybe even consciousness, leading the tale’s dogged protagonist and its audience into a disorienting labyrinth of suggestion and uncertainty. Moving closer to the center of this mystery proves to be more alienating with each step, until you’re left with the chilling realization that sometimes you go looking for the boogeyman without realizing he’s already looking for you.

What winds up as a contemporary suburban horror story begins half a world away, in the Ura Valley of Bhutan, where four hikers encounter a mystical force in 1995. Where most horror films might treat this as a breezy prologue, Prior luxuriates in it, effectively crafting a 20-minute short film with remarkable precision and dread. One of the hikers falls into a crevice, where he discovers a bizarre shrine with a cobwebbed skeleton for its centerpiece. After he falls into a catatonic state, his companions take refuge at the top of a mountain and endure three days engulfed in swirling snow and howling wind. The third day culminates with an inexplicable act of violence that leaves only one survivor and several questions that Prior leaves scattered about like seeds to take root, their budding tendrils snaking through the film before finally blossoming into a corpse flower at the climax.

In the meantime, the scene shifts 13 years later to Missouri, where James Lasombra (James Badge Dale) celebrates his birthday alone in a restaurant. Fleeting flashbacks hint at past trauma accounting for his loneliness, and a conversation with his friend’s daughter Amanda (Sasha Frolova) illuminates things more: James is a widower, having lost his wife and child to a tragedy. Amanda has recently lost her father, too, so the two have bonded over a shared grief. When she disappears the next day, it’s very much a personal concern for James, a former detective who takes it upon himself to find the missing girl. Amanda leaves only one clue, a cryptic message written blood splashed across her mirror: “The Empty Man made me do it.” 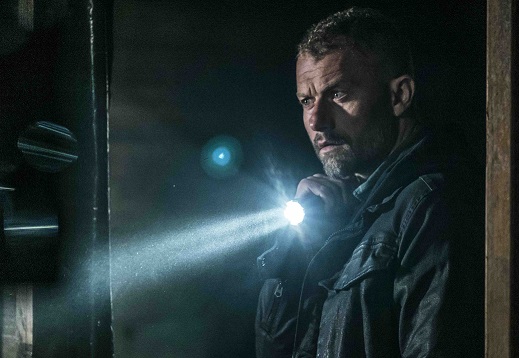 The boogeyman’s name is like an infection. It worms into James’s brain, sending him on an investigation that grows bizarre with each new detail, yielding a stretch of film that feels like ZODIAC ON ELM STREET. James compulsively sifts through details and stories before uncovering a local legend about a bridge where teenagers conjure The Empty Man by whispering his name into discarded bottles. Amanda and her friends may be his latest victims, but Prior is in no hurry to reveal the particulars. His deliberate approach becomes the film’s suffocating trademark: each shot and story beat is measured and unhurried to meticulously forge a calculated dread. THE EMPTY MAN coils around the audience, slowly absorbing them into its droning rhythm, its insidious shadows sprawling with each new development. Even the customary scene where James trawls Google for information swells with menace and portent as another, slightly more lucid boogeyman comes into focus: the Pontifex Institute, a New Age think tank dedicated to expanding human consciousness.

Because it unfolds with an almost hushed reverence, its plot slowly burning towards its revelations, THE EMPTY MAN gradually contorts into a different type of picture. The shadowy boogeyman grows more enigmatic, yielding to occult, cabin-in-the-woods horrors, complete with rituals and cursed videotapes. Taking cues from the likes of KILL LIST and HALLOWEEN III, one stretch finds James on the run from torch-bearing cultists as a driving rain soaks the woods. Prior shoots it in impressionistic fashion, allowing streaks of lightning to illuminate Dale’s frantic face, bringing a measure of deliberation and control even to this chaotic sequence. Despite spinning such an outrageous yarn (and believe me when I say it unspools secrets until its final frame), THE EMPTY MAN never feels unwieldy or forced. Its audacious 137-minute runtime is completely earned, if not absolutely vital to making the whole gambit work. 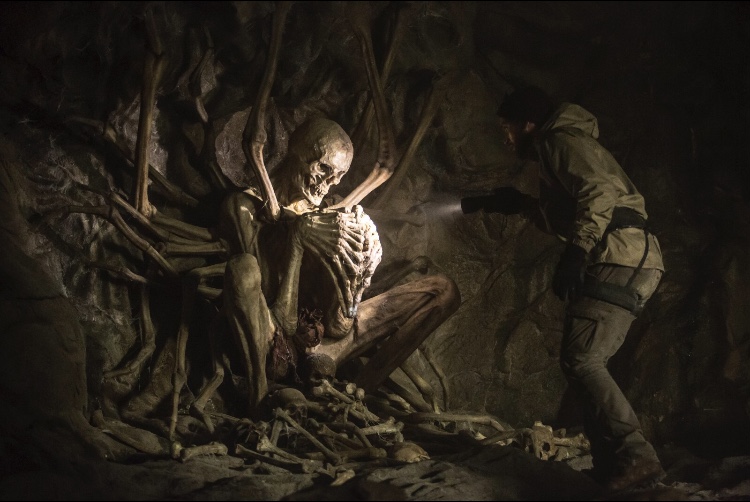 THE EMPTY MAN indulges the notion that the journey is more important than the destination, mostly because it wants both its protagonist and its audience to become consumed with a search for meaning. In doing so, it strands them in a downward spiral, letting them get lost in a funhouse of distorted mirrors that reflect back some uncomfortable truths about the fruitlessness of meaning itself. The emptiness of the title looms throughout, but it especially reverberates in a climatic feedback loop that leaves viewers grasping for meaning, looking to fill an abyss that merely glares back. Somehow, a movie where a Creepypasta demon plunges glass shards into teenagers’ faces becomes an existential, deconstructionist mindfuck exploring the power of suggestion and the arbitrary nature of reality itself. I’m not sure you should expect anything less from a movie that names its high school after Jacques Derrida, an absurd detail that makes it clear THE EMPTY MAN is taking some big swings.

But you’re compelled to go with it all. Prior — making his feature film debut after producing various supplemental home video material for two decades — exerts a masterful grip throughout. His previous collaborations with David Fincher had an obvious influence on his meticulous direction here: the careful shot selection, the patient editing (I am happy to report that this isn’t one of those movies that resorts to frenzied shots of a CGI boogeyman for cheap jolts), the ambient soundscape that allows menace to seep in even from beyond the frame. It’s remarkable that THE EMPTY MAN exists at all, even more so in such an uncompromised form. Something tells me there’s an alternate dimension out there where the studio insisted on hacking it up into a more digestible 90-minute spook-a-blast, and we’re all yelling at Fox/Disney to release the Prior cut.

Instead, THE EMPTY MAN was merely a casualty of the Fox/Disney merger, an obvious passion project for its director that slipped between the cracks as the studio’s respective execs sorted out higher profile releases. When it was unceremoniously dumped into theaters and VOD late last year, it was appropriately haunted by the specter of movies with similar fates. Such long-delayed projects carrying little-to-no fanfare usually wind up that way for a reason, so it was easy to assume THE EMPTY MAN would be no different. Likewise, the film dwells in the shadows of similarly-themed nonsense from recent years, lightweight Creepypasta fare like THE SLENDER MAN and THE BYE-BYE MAN. But it couldn’t be further removed from that kind of stuff; instead, it rests on the opposite end of the spectrum, earning company with those quote-unquote “prestige horrors” that have been in vogue in recent years. If I were the cheeky type, I’d suggest that THE EMPTY MAN would be garnering a lot more attention if it were prefaced by an A24 logo. Okay, maybe I will be that type just this once: just pretend that THE EMPTY MAN has inspired a bunch of outrageously priced merchandise on a boutique website and hitch a ride with a future cult classic. That way you can say you were always there when it inevitably earns a commemorative home video edition a years from now (god willing that physical media is still around, of course).