Home  ⁄  The Wire  ⁄  WON’T YOU BE MY NEIGHBOR? Is A Powerful, Emotional Portrait Of Fred Rogers

There seems to be a twisted fascination we all have inside of us to find the seedy underbelly of anything that’s perceived as wholesome or good. We look for sexy hidden messages in Disney cartoons and long to find hidden secrets in celebrities’ pasts. Fred Rogers appears to be the only human being who doesn’t have any skeletons in his closet, not even a single femur. He was never a Navy Seal, he wasn’t covered in tattoos as Internet rumors and memes have falsely claimed over the years, and he probably never even gave anyone the middle finger. He was a simply a registered Republican and ordained Presbyterian minister who believed in children and wanted to create a television show that treated them like intelligent beings. WON’T YOU BE MY NEIGHBOR?, the latest documentary from director Morgan Neville, is a powerful, emotional portrait of the most genuine man to ever grace this Earth.

NEIGHBOR takes a linear approach to Fred Rogers’ life with no clever wraparound with overly cinematic shots. Through archival footage and recent interviews with family, friends, experts, and the longhaired weirdos who worked behind the scenes at PBS, the film tells Rogers story, from his youth as a bullied kid, to his time in the church, and his eventual move into television. There is certainly nostalgia in the tank (just seeing that cat puppet is enough to get eyes to well up with tears), but it’s also a fascinating look at a man’s career that even people who were fans of Rogers when they were younger may not have explored in depth: his foray into adult programming on PBS in the ‘70s as well as the many heavy topics that Rogers addressed in a way only he could. It’s remarkable that in 1968, on second episode of Mr. Rogers’ Neighborhood that the Rogers and his team took on the Vietnam conflict which was making its way into living rooms across America via the nightly news. It’s this notion, that Rogers truly believed that children are our future and that somebody needed to help even the youngest child understand what was going on in the world, that fueled his life’s work. The film presents Rogers as an unsung voice of the counterculture that walked quietly and didn’t even need to carry a big stick. 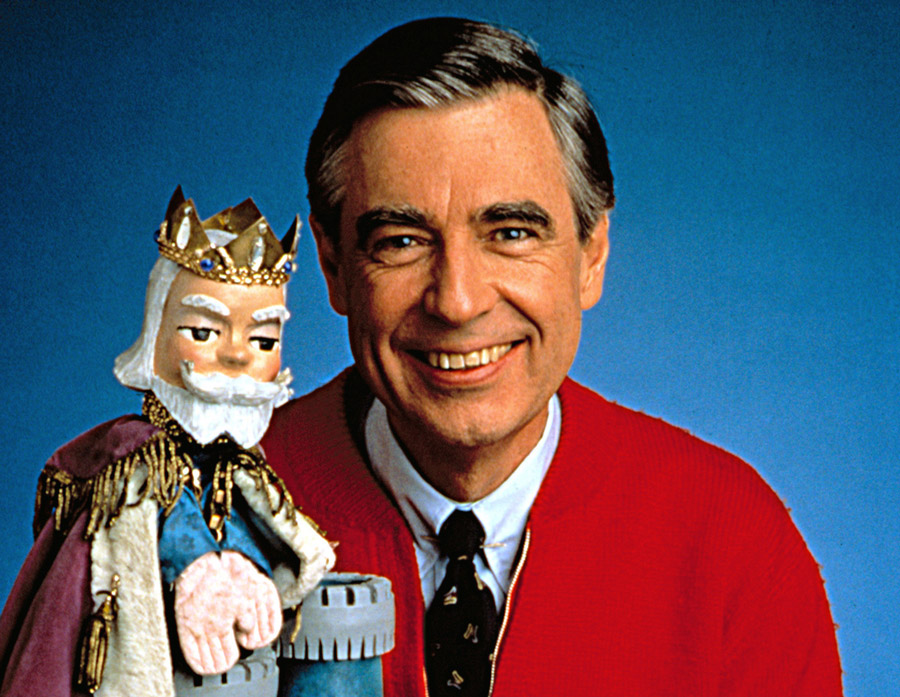 Fred Rogers & King Friday In WON’T YOU BE MY NEIGHBOR?

There’s so much honesty in the film and that’s a testament to its subject. There doesn’t appear to be a cynical or mean bone in Fred Rogers body, but you do get a sense that there was some anger, anger over where he saw the world moving towards. He wanted to change the world, and he did. He never displays that anger though, he turned it into a positive and put it into his work.

One of the best interview subjects in the film is François Clemmons who portrayed Officer Clemmons on the show throughout the ‘70s. Clemmons brings some very human laughs to NEIGHBOR; in response to questions on whether Fred Rogers was homosexual, Clemmons—a gay man—states that if anyone would have been able to tell, it would have been him. The film also explores how Clemmons had to navigate being a gay man in the ‘70s who also appeared on a children’s television show. They were very different times. The film doesn’t shy away from the preconceived notions about Rogers because of his religious background and political alliance. If anything, NEIGHBOR shows that Fred Rogers always did things his own way, he was very punk rock in that sense, even in a cardigan.

Mr. Rogers’ Neighborhood is about as far away from 42nd Street as you can get. But even the sleaziest fan of the nastiest exploitation films probably spent an hour or two with Fred Rogers in their youth. That’s what makes this film so special, the adoration for Rogers and his show is almost universal. It was an era when there were only so many channels—no cable, no Netflix, no Hulu—and there were only so many shows, and because of that everyone was watching the same thing. While every show has it’s following, back then, the following could be even larger, if only because a lack of options. Mr. Rogers was the first thing kids fell in love with, and the first thing they grew out of. Just about everyone loved Mr. Rogers and this WON’T YOU BE MY NEIGHBOR? is sure to touch them all.