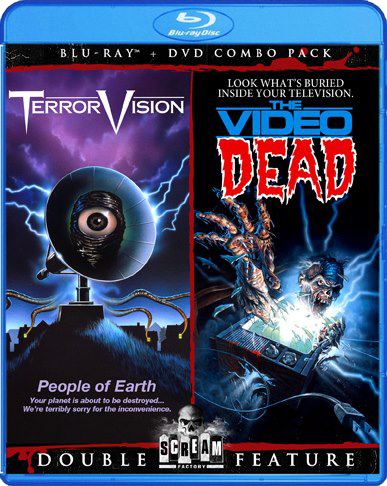 Click on the box art to order from Amazon!

Shout! Factory has quickly become to Blu-Ray now what Anchor Bay was to DVD in the early 2000s – a name that you can trust to bring out some of the most requested catalog genre titles with new presentations significantly more ambitious than anyone would expect. We can point to last week’s Blu-ray release of THE NEST, but their double feature release of a pair of mid-‘80s flicks involving invasions from out of the television is a perfect example of their commitment, giving fine treatment to two films that have small, but loyal, cult followings.

The second film in the package, THE VIDEO DEAD, is a likeable little mid-‘80s zombie pic about a brother and sister who discover a TV set in their parents’ new house that serves as a gateway to the world of the undead. After brother Jeff falls for a local blonde dog walker and shirtlessly smokes a bunch of pot, zombies attack the house and he teams up with an older guy who’s arrived looking for the set in order to fight off the undead invasion. 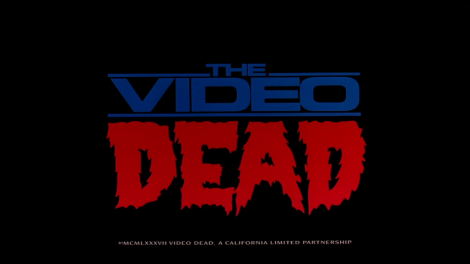 While shot in California, THE VIDEO DEAD feels like a regional project that somehow managed to be picked up by a major video distributor in order to end up on every video store shelf at the time. It’s amateurishly acted, but features some great zombie make-up and a third act plot twist that would have been unthinkable in a studio film.

It’s a fun little throwback, and listening to the commentary tracks, one featuring director Robert Scott, editor Bob Sarles and effects creator Dale Hall Jr. and the other featuring Hall, assistant Patrick Denver, production manager Jacues Thelemaque and stars Roxanne Augesen and Rocky Duvall, make it sound as though it was a hell of a lot of fun to shoot. 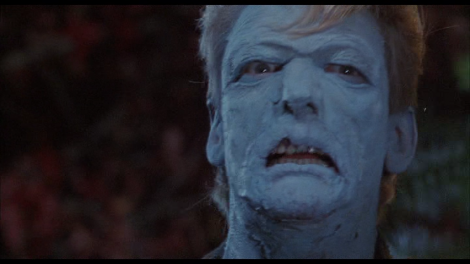 THE VIDEO DEAD is an entertainingly low rent little zombie flick. But it’s the first feature on the disc, TERRORVISION, that I want to get to.

Ted Nicolaou’s TERRORVISION, a 1986 pic out of Charles Band’s Empire Pictures, is pretty much the definition of a “cult film” in the purest sense. It’s one of those films that a small segment of viewers love and are unnaturally obsessed with, having spent the last twenty years trying to find a copy of the ancient Lightning Video release and scouring torrent sites in order to hope that someone recorded the airing of the film on MGM HD, enabling them to see the film, at last, in its’ proper format. The other 90 percent of the film’s viewers, however, just rolled their eyes at the stupidity of the whole thing and dismissed it as another awful, would-be “camp” film out of the Band school of juvenile exploitation. 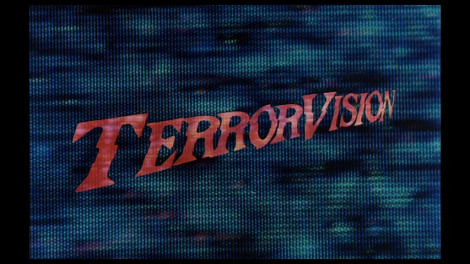 I’ve always been one of the former crowd, and it’s been a hard position to justify. TERRORVISION isn’t exactly “funny” as much as it is “goofy” – everything about the film, from the monster to the characters to the sets, are painted with such broad brushstrokes that nothing comes off as touching reality on more than a vaguely expressionist level. It’s this complete devotion to genuine goofiness that has driven many people into hating it with a fiery passion.

TERRORVISION is the story of a grotesque alien that teleports via a satellite dish into the home of the suburban California Putterman family (though the film is shot in Italy) and begins taking over their bodies, despite the best efforts of survivalist Grandpa (Bert Remsen) and spunky son Sherman (Chad Allen). The parents (Gerritt Graham and Mary Woronov) are too busy being occupied by their new swinging partners (Alejandro Rey and Randi Brooks) while punk/new wave/valley girl sis Suzy (Diane Franklin) is sick of her little brother’s stories and just wants to hang out with her boyfriend O.D. (Jon Gries). 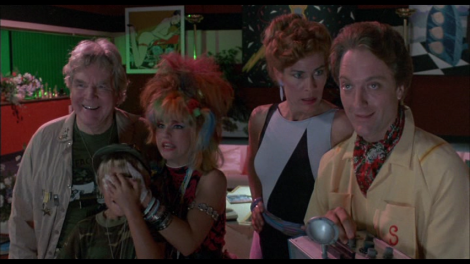 The plotting of many other Empire Pictures border on ridiculous, but they’re almost always played straight, ramping up their premises while still having the actors on screen performing with the utmost seriousness. It essentially became a house style, coupling Band’s energetically childlike devotion to iconic psychotronia (You can almost see him in pitch, yelling “It’s got a cyborg! And a ninja! And it’s in space! And there are girls in bikinis!”) with a solemnity that, with the exception of a few talented writers and directors like Stuart Gordon, C. Courtney Joyner or Danny Bilson, sucked nearly all of the humor out of the situations. Band would never produce a tongue-in-cheek film like THE ICE PIRATES – he’d create a movie that uses tropes that are just as silly but never think of playing them for chuckles, like METALSTORM: THE DESTRUCTION OF JARED-SYN.

(This makes complete sense to me after going to one of Band’s Full Moon Road Shows and realizing that Band’s sense of humor is, well, awful. He’s just not a funny person, and the moments of attempted humor in the films he’s actually directed are about as painful as a collaboration between Ezio Greggio and a lower-tier Wayans. If you like fart jokes and stoner puns, however, go ahead, pick up that EVIL BONG boxed set and knock yourself out.) 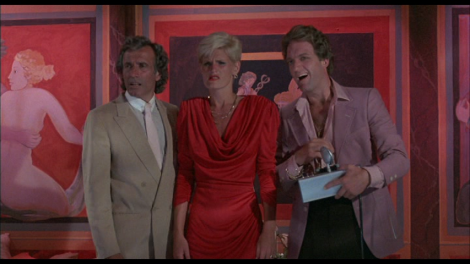 TERRORVISION takes the opposite tactic of the standard Empire Pictures mold. Instead of taking a preposterous premise and playing it straight, it takes a relatively straightforward idea (alien attacker destroys a family) backed by a script that doesn’t actually have much in the way of jokes and cranks the volume on the performances and set design to eleven. As goofy as the film is, the humor doesn’t come from the script – aside from an occasional reference to “hinies,” all of the dialogue could have been played straight and TERRORVISION would have been nothing more than a fairly routine ‘80s horror flick with an interesting look – it comes from the deliveries of the cast and the wild world that Nicolaou has created.

It’s this strange, and possibly unintentional, decision by Nicolaou that makes TERRORVISION such an enigma, and moves its’ standing from “Empire Pictures Throwaway” to “Cult Movie That People Either Love or Despise.” With a lesser cast, TERRORVISION would have been, at best, unremarkable, but everyone involved seems to have been given the direction to go over the top to their hearts’ content. Graham is manic, Woronov elicits a sly, sexy boredom (her allured-yet-disgusted scowl when she describes a musician on MTV as “nasty” is the stuff of great .gifs) and Franklin and Gries make an entertainingly loopy couple, even if the characters would never exist in any sort of natural cultural habitat. 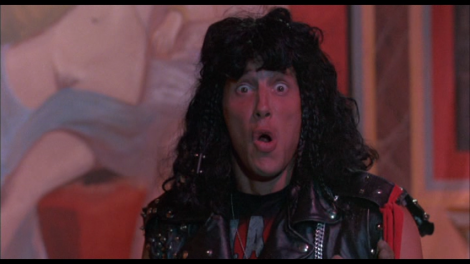 Every member of the supporting cast is on board as well, from Rey, who seems to be relishing the chance to play a ridiculous Greek caricature, to Brooks, whose helium-voiced ditsiness just has to exist in order to reach the volume of the rest of the film, to Jennifer Richards as horror hostess Medusa, a disaffected, spiteful, viciously entertaining character who serves as a bizarre evil twin of the Elvira persona. Hell, even Medusa’s harrowed assistant gets to mince about at maximum volume.

It also helps that the monster in TERRORVISION is a revelation – a deliberately asymmetrical crimson mass of flesh, eyes, claws and tongues that manages the rare feat of being simultaneously repellant and adorable. The producers of MAC AND ME could have learned a lot from the John Carl Buechler creation, as it’s a great work and one used well in the film, especially with the movement limitations detailed in the behind-the-scenes documentary on the disc. 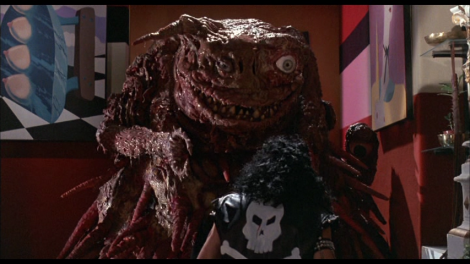 Nicolaou may have dashed out the jokeless screenplay over the course of a busy weekend, but the look of the film is impressive and suits the tone of the acting perfectly, a fact that the new Blu-ray transfer reveals much moreso than any previous incarnation of the film. As much as the actors were clearly allowed to chew the scenery, and this is scenery meant to be chewed, with the most garish of ‘80s fashion, iconography, art and design thrust into every scene. Nicolaou has the film lit with a variety of wildly harsh colors that emphasize the cartoonishness of the proceedings, and the new transfer shows off a movie that’s more akin to the look of CREEPSHOW than TRANCERS, a beautifully hellish landscape of neons and pastels that serve as a perfect backdrop to the shrillness of the characters.

There’s no question that TERRORVISION is a shrill movie, and it’s one of those films that you’ll either embrace within the first ten minutes or just roll your eyes and hit eject – the tone isn’t going to make some final act switch like THE VIDEO DEAD does. TERRORVISION is “camp” in exactly the opposite way that my favorite film BEYOND THE VALLEY OF THE DOLLS is – while DOLLS relies on the diametric extremes of a quick-wittedly overwrought script and bullettrain-like editing filtered through performances and a look that provides the utmost of sincerity, TERRORVISION shoves a nonentity of a script and relatively bland direction through hysterical performances and wild-eyed design that can’t help but hold your attention. While the results are very different, they still hit the same pulp-loving cult movie bone, at least the one that resides in my body. 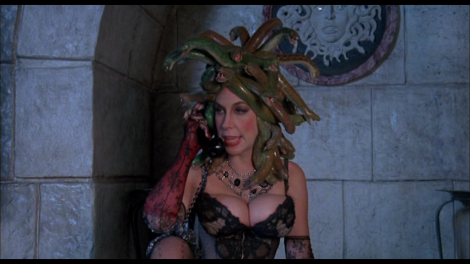 The cartoonishness is emphasized by the interviewees in the features of the Blu-ray disc. Nicolaou, Franklin and Gries are on hand for an entertaining commentary track that’s never dull, even if there are occasional lapses of pointing out exactly what’s on screen. The three are also involved in the documentary feature on the disc, and while some stories are in both extras, it’s nice to hear from Mary Woronov (who deserves a documentary all her own) and Chad Allen, who adorkably talks about how his uber-Christian parents wouldn’t let him be on the same set as some of the more graphic art. (Gries points out moments in the film when they clearly lost that battle.)

TERRORVISION is often cited as a “guilty pleasure,” and even those that like the film seem almost apologetic about it, calling the film itself “wretched” and “dumb.” The problem isn’t that TERRORVISION is dumb, it’s just that it’s not actively smart and honestly has no intentions of being any more than puffy fun. While at first glance, the use of overinflated archetypes seems to mark the film as some sort of satire on the various subcultures of the time, (swingers, survivalists, new wave musicians, whatever the hell Medusa is supposed to be) Nicolaou has no such ambitions and just wants a bunch of loud people playing to the balcony. 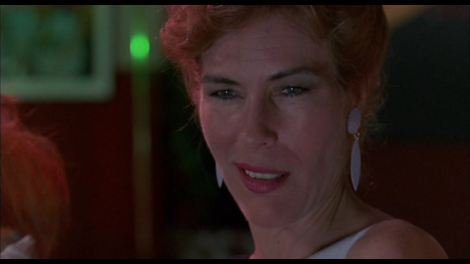 The resulting film may play like a parody of a genre that doesn’t actually exist, but I, for one, still find TERRORVISION an energetically unique flick that never ceases to amuse me, even without the benefit of the narcotic substances many reviewers have recommended. (Mind you, they may help upon your initial watch.) I hate to compare the film to the lovably revolting monster depicted in it, but it’s pretty clear that the monster is the embodiment of the movie itself – a repulsive, wide-eyed, insanely garish monstrosity that can’t be bothered with any of your stupid ideas as to what it’s supposed to do or say. It only wants to suck you into its vortex, and I’m more than happy to be engulfed each time I hit the “play” button.