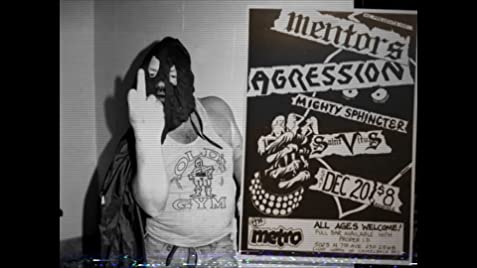 Directed by Rodney Ascher and David Lawrence from VHS footage shot by Ryan Sexton, THE EL DUCE TAPES is a well put together documentary about an insufferable “rape-rock” musician. The man’s name, as you might guess, is El Duce (real name Eldon Hoke). During a short time in the late ’80s and early ’90s Duce and his band, The Mentors, became cult figures in the late ’80s and early ’90s. After his lyrics were used as an example of music that was corrupting the oh-so-fragile youth during the PMRC hearings, junk talk shows started to invite him on as a guest. It was during this time that Sexton, a struggling actor at the time, started following Duce and The Mentors with a massive VHS camcorder in hand.

I remember first seeing the overweight and bearded Duce in Nick Broomfield’s documentary KURT AND COURTNEY, a sensationalist attempt at convincing the public that Kurt Cobain’s suicide was faked and that he was actually murdered at the behest of  Courtney Love. In that film, Duce claimed to have been offered $50,000 to kill Cobain. Through clever editing, Broomfield made Duce look much more menacing than he actually was. Coincidentally, Duce was killed just after the interview, so of course the Broomfield not so subtly suggested that maybe some unknown entity had Duce snuffed out because he had made an on-camera confession. The truth, which never got in the way of that wretched documentary, was much more pedestrian. Duce died in a drunken stupor trying to outrun a train, and he was flat-out lying about the $50,000. 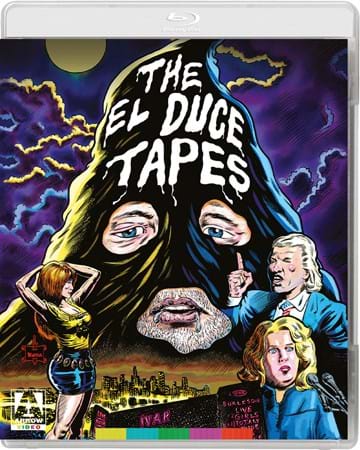 THE EL DUCE TAPES gives every indication that the guy was not only incapable of snuffing anyone out, he probably didn’t even know how to handle a gun. He was a lazy alcoholic narcissist who slept on his friend’s couches and didn’t seem to do anything except drink beer, play his punk rock shows, and cut wrestling promos in his bathroom mirror. He was an asshole who wrote misogynist, juvenile, dirty lyrics that only served to get him the kind of attention paid to a two-year-old taking a shit on the ground during a family picnic.

Sexton, who’s credited as the “interview director,” talks primarily with The Mentors’ guitar player and Duce’s best friend, Dr. Heathen Scum (real name Steve Broy), and I don’t give a shit how articulate the guy is in claiming otherwise, but El Duce was no artist. He clearly too stupid to add any depth to his music, let alone enough for him to be considered an artist. And that’s actually a bit of a shame. While his voice sounds like shit, the band is more than competent, and Duce is a pretty dang good drummer.

We’re introduced to El Duce as he’s on stage in a seedy club. Duce screams into the microphone, “Everyone who likes to rape women, say ‘Seig heil’.” The band then goes into a lovely rendition of “Find Her, Fuck Her, Forget Her.” Charming.

I think the main thing that makes this a very good documentary is that Ascher and Lawrence place Duce in a socio-political context. Beginning with the PMRC (Parents Music Resource Center) hearings in 1985 and continuing into the early ’90s, there was a backlash from parents and other concerned citizens (the first President Bush even makes an appearance, speaking out against The Simpsons, of all things) against media that was starting to test the limits of language, sex and bad taste in TV, music, and movies. The best part of all this, of course, was that not only were these efforts doomed to fail, but these attempts at censorship would only raise the profile of the very media these concerned citizens groups took a stand against.

Duce and the Mentors benefited tremendously from all this, and went from playing bars to opening for some relatively big punk acts. Duce also ended up getting on national television. For a short while, he became a classic “man you love to hate.” Ascher and Lawrence include archive footage of Duce on both the Jerry Springer Show and Hot Seat with Wally George. Though Springer and George were ostensibly on opposite sides of the political spectrum, exploiting middle-class outrage was their bread and butter, and in that they had more in common than not. El Duce was a moron who seems to have had no real idea why he was screaming about raping women, but Springer and George are far more diabolical for knowing exactly what they were doing. Well, to quote the great philosopher and former head of World Championship Wrestling, Eric Bischoff, “Controversy creates cash.” And, indeed.

In the end, El Duce got what he wanted, though on a very minor scale. He got some mainstream attention and raised the ire of a middle-class America that couldn’t wait to be outraged over what was on their TV and radio, all the while feeding the beast they so hated by consuming profile-raising media.

Still, I’d be remiss if I didn’t mention that Ascher and Lawrence are able to squeak out a smidge of sympathy for the guy. He was homeless, he was an alcoholic, his father beat him, and he seems to be estranged by his entire family, except for one of his sisters, who appears in the doc. It’s hard not to feel at least a bit of sympathy for the guy, especially since pretty much everyone that Sexton interviewed for the film swears that he had never harmed anyone. And, indeed, there’s no indication of physical violence in any of the footage. It was all words. Empty words. It’s to Ascher and Lawrence’s credit that they were able to show the complexities behind a simple guy. This is very good, well-crafted documentary filmmaking.

Available now on Blu-Ray from Arrow Video, THE EL DUCE TAPES is packed with extras, including a commentary track from the director, an interview with Ryan Sexton, plenty of extra footage, and a new follow-up documentary on Dr. Heathen Scum. It’s a lot, for sure, and although I watched part of all the special features, there was a lot I skipped. I’d just had enough.

A lot of time and talent went into the film, and it’s a very well-crafted look at the life and times of an outrage peddler. It’s definitely worth a look, if you’ve got the stomach for it.