Revenge + Vietnam Vet = One badass flick that is ready to kick some balls and toss some bullets into the chest of the bad guys. Synapse knows how to drop the goods and the fact that they are giving this flick the Blu-ray treatment shows you how cool that crew is. Here is more from the green brains:

THE MAN THEY PUSHED TOO FAR IS COMING FOR YOU—IN HI-DEF!
THE EXPLOITATION REVENGE CLASSIC BURNS ONTO BLU-RAY IN A
NEWLY REMASTERED UNRATED DIRECTOR’S CUT! 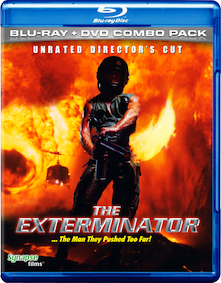 Christopher George, Robert Ginty, and Samantha Eggar star in THE EXTERMINATOR, James Glickenhaus’ explosive story of Vietnam vet John Eastland (Ginty), a man who launches a bloody vendetta against the New York underworld when his best friend is brutally beaten by a vicious street gang. Eastland becomes a vigilante hero to the public, but to police The Exterminator is a psychopath capable of dangerously undermining an entire government administration.

Synapse Films is proud to present
THE EXTERMINATOR in its more violent and gory Director’s Cut, lovingly restored in high-definition from original vault materials. One of the most cold-blooded and controversial revenge films ever made, this is “a sick example of the almost unbelievable descent into gruesome savagery in American movies.” (Roger Ebert, Chicago Sun-Times)