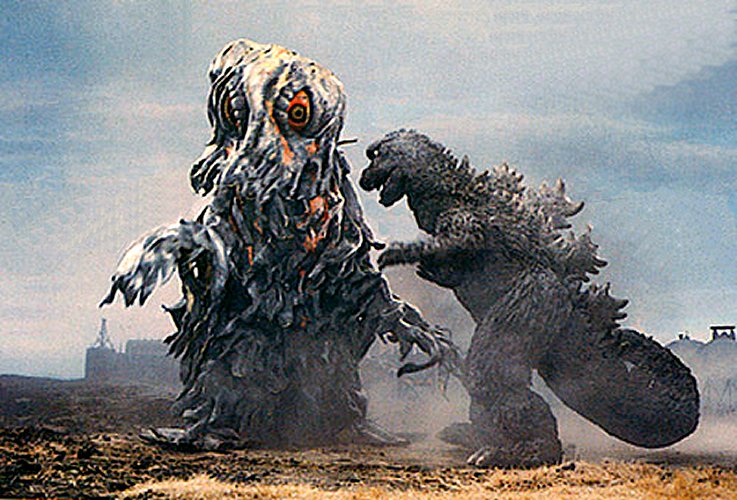 CREATED BY: MAN IN SUIT

The rampant pollution infesting the waters of the Japanese coastline proves to be one hell of an ecological issue when  an alien creature from the bowels of outer space begins to feed on a steady diet of sludge and waste. Growing to mammoth proportions, the alien turns Japan into a filthy stomping ground. Deaths and casualties begin to pile up as the beast, dubbed Hedorah, rampages across the country, spreading its toxic fumes over the masses. Enter former atomic terror turned savior of the Earth, Godzilla, who engages the giant pile of garbage in a titanic duel of fist cuffs and shit kicking. Along with the help of a scientist and a giant panel of electrodes, the Big G takes down the Smog Monster and a pair of offspring festering in its filth. Chock one up for atomic radiation! With its anti-pollution theme, odd hodgepodge of monster action, psychedelic imagery, music and goofy cartoon sequences, GODZILLA VS. THE SMOG MONSTER remains the strangest of all Kaiju flicks. Fans are usually divided into three camps on this one: the love its, the hate its and the what the fuck (?) its.  Along with GODZILLA VS. MEGALON, no other film in the Big G’s history has generated such a cult following. This was the first flick to come out of Toho’s dark days of the 1970s when budgets were being cut in half and stock footage from earlier films was used in abundance.  While its budget is foreseeably lower than say MOTHRA VS. GODZILLA (1964), SMOG MONSTER still manages to hold its head above water with all-new monster footage and its unique topical themes. Hedorah proves to be one of Godzilla’s toughest foes with its toxic mud and mist spitting weaponary and an ability to mutate into multiple forms that can take to land, sea and air. Good or bad, this Kaiju cult classic remains a unique monster movie experience and a must for fans of weird cinema.

Hedorah’s bout with Godzilla at the docks in Fuji City results in a massive amount of mud slinging as the Big G whirls the Smog Monster around in a wrestling type move that “Rowdy” Roddy Piper would be proud of. Giant pieces of sludge crash into the surrounding buildings, with one such piece breaking up a card game and drowning its participants in a sea of filth. Even more violent are the scenes that show a number of unlucky bystanders fade into bones courtesy of Hedorah’s toxic fumes and some gruesome dissolves, complete with eerie moans on the soundtrack. 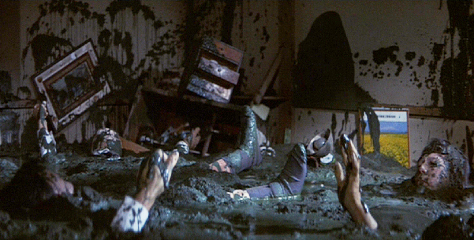 The “you’ve got to be kidding me” moment:

Realizing that the King of the Monsters is too much of an opponent for its stinky ass, Hedorah mutates into its flying saucer mode and takes to the skies. In one of the most infamous moments in Kaiju history, Godzilla gives chase by launching himself into the troposphere by using his atomic breath as a means of jet propulsion!

Director Yoshimitsu Banno , who had worked as a production assistant for Akira Kurosawa and Eiji Tsuburaya, never directed a feature film again due to  producer Tomoyuki Tana’s disappointment of the film.

The American International Picture dub of the flick included an English version of the film’s infamous theme song: “Save the Earth”.  Adryan Russ belted out the lyrics, which were loosely based on the Japanese original.

Along with WAR OF THE GARGANTUAS (1966), this was the most violent Kaiju flick from the Showa era.

The oddball score was composed by Riichiro Manabe, best known for a series of jazzy scores for new-wave director Nagisa Oshima.

During his battle scenes, Godzilla would scratch his nose, emulating the action of Japanese pop star Yuzo Kayama.

A sequel set in Africa was planned but never made due to producer Tanaka’s disliking of the film.

Hedorah made an apprearance in the all-star Kaiju epic:  GODZILLA: FINAL WARS (2004). 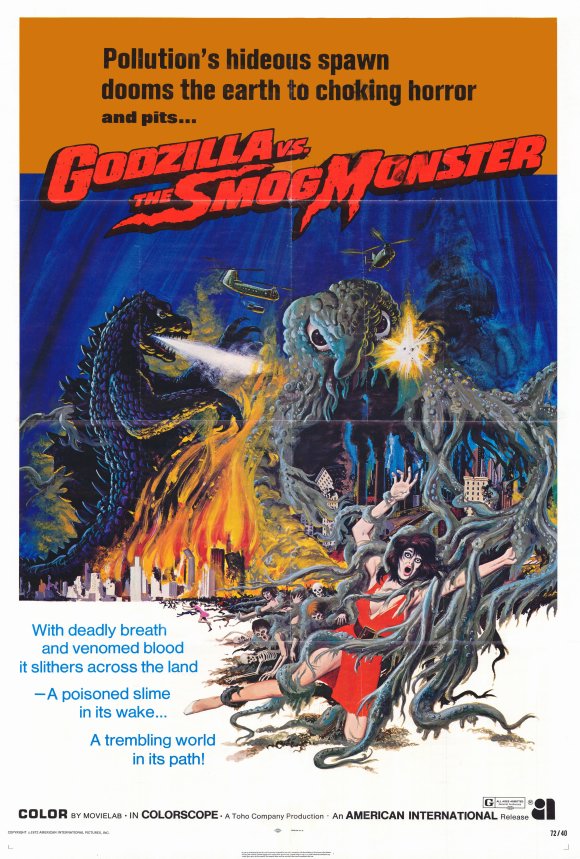