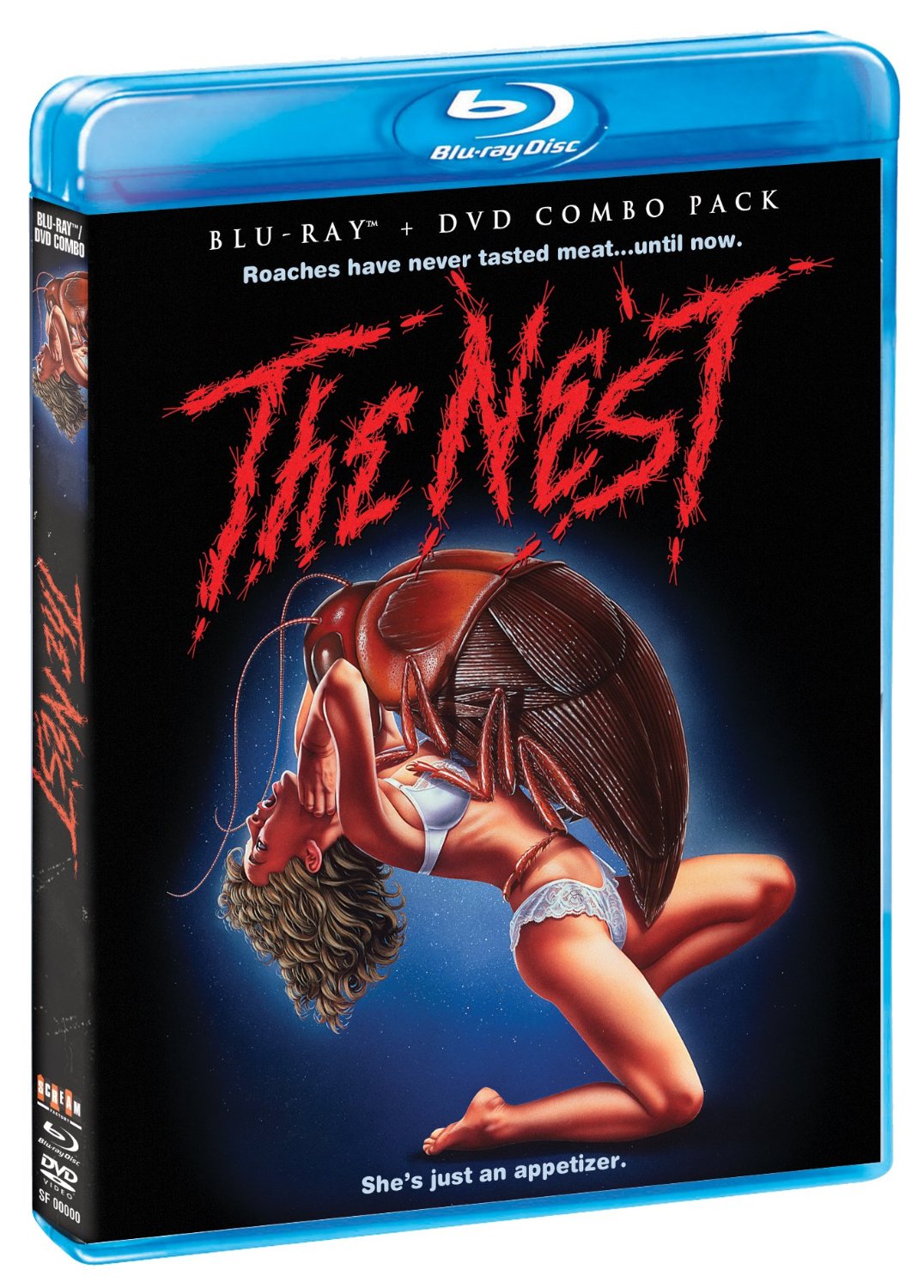 Click on the cover art to order from Amazon!

You really can’t go completely wrong with killer bugs as the premise for a horror film.  Even the silliest of premises (I’m looking at you, SLUGS) will at least be mildly entertaining, as the natural reaction to watching human beings dealing with vast amounts of creepy crawly critters at least warrants an “ew.”  When you’re talking cockroaches, it’s a double-“ew” – they’re bugs whose notoriety as a spreader of filth is something pretty much any audience can identify with.

1987’s THE NEST is neither the first nor the best horror film about killer cockroaches, and it doesn’t rank with the likes of the final segment of CREEPSHOW or Jeannot Szwarc’s BUG in terms of “ew” factor, but it’s still an enjoyable little flick even if it doesn’t do much to forward the genre.  At the time, however, that was probably enough – by the film’s theatrical release in 1988, the nature run amok film chronicled so well in Lee Gambin’s “Massacred by Mother Nature” had mostly vanished, and a solid little killer cockroach flick served as a welcome relief to the teen stalker flicks and supernatural erotic thrillers that were permeating video store shelves. 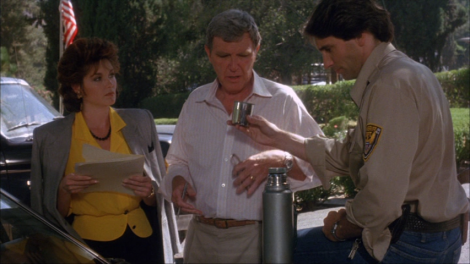 The first effort as director for Terence Winkless, who’d worked on films like DARK STAR and H.B. Halicki’s DEADLINE AUTO THEFT in addition to writing the screenplay to THE HOWLING, THE NEST features a plot so comfortable to the genre that it’s barely worth mentioning.  There’s an island town, and in order to raise money, they’ve allowed an evil corporation to come in and perform experiments that result in mutant cockroaches.  Replace the evil corporation’s experiments with a toxic spill and you’ve got a perfect film premise for a movie lensed ten years earlier.  Hell, replace the corporation with a government nuclear testing facility and you’ve got one for a flick that wouldn’t seem out of place in the ‘50s.

Even the characters involved are tropes, and no relationship here should surprise anyone who’s seen a killer critter flick before.  There’s the town sheriff, his former girlfriend back in town from the big city, her rich mayor father, a quirky exterminator and a duplicitous scientist working for the corporation.  There are also a number of townspeople that we can watch getting attacked by roaches while the lead characters go about their business of forwarding the plot. 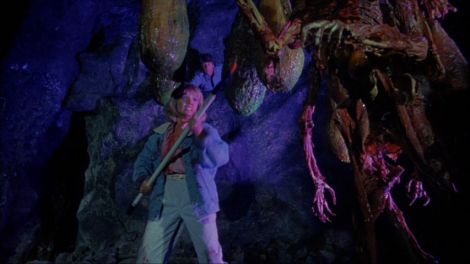 While it may sound as though I’m criticizing THE NEST for being about as generic as a creature feature can get, the truth is that it fits like an old comfortable shoe, albeit one with rotting roach meat in the toe.  The cast is admirable, especially Robert Lansing as the mayor, no stranger to such proceedings from his roles in the similar EMPIRE OF THE ANTS and ISLAND CLAWS.   Also of note is Terri Treas’s performance as the corporate scientist, whose fascination with the bugs that have been engineered in order to withstand normal insect repellants borders on the sexual.  Even the side characters, like the sheriff’s doomed in-town waitress girlfriend played by GRANT THEFT AUTO’s Nancy Morgan or the heavyset librarian portrayed by character vet Diana Bellamy, are memorable without stealing focus.

And the focus is, after all, on the cockroaches, and THE NEST has loads of ‘em.  They go after people, they go after dogs, they go after cats, and eventually, they mutate into new forms based on the creatures they’ve consumed.  Anyone with even the slightest roach fetish will probably start cleaning their apartment with an OCD-like commitment after a viewing, and really, that’s exactly what you’d expect from a movie like this.  Unless you’re really hoping for the bug-lady sexytime depicted in the cover art that doesn’t actually appear anywhere in the film, in which case, I’ve got some good hentai to show you. 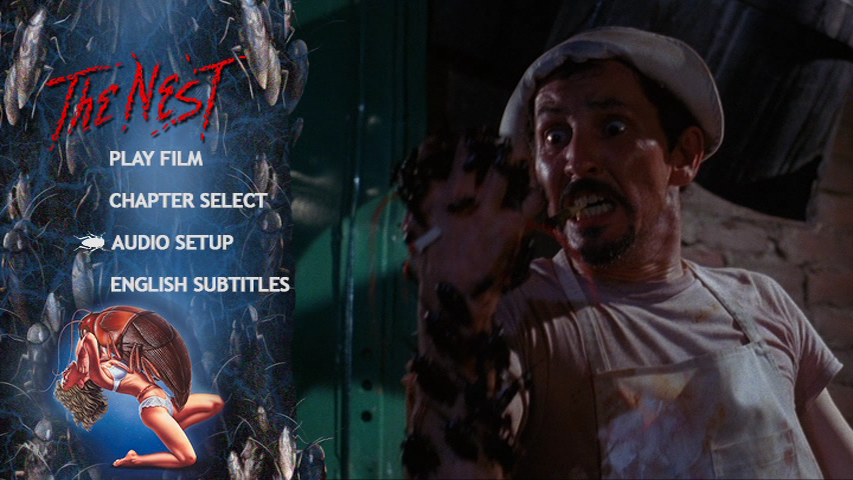 Released long ago on DVD as part of New Horizons’s “Roger Corman Presents” line, Shout! Factory has pulled THE NEST into the HD age with their new Blu-Ray release.  (A DVD is also included.)  The film looks very good, save for some light grain, and the brilliant colors used by Winkless in the cave at which the end of the film is set appear beautifully.  The only disadvantage to the HD transfer is that it’s less forgiving of some effects, such as a cat creature that appears in the final third, that were obviously never meant to be seen with such clarity for any length of time.

The disc also includes a commentary track from Winkless that covers many aspects of the film, including locations and dealing with cockroach actors.  It’s a relaxed, yet never dull, track, and it’s clear he still carries a lot of love for the film. 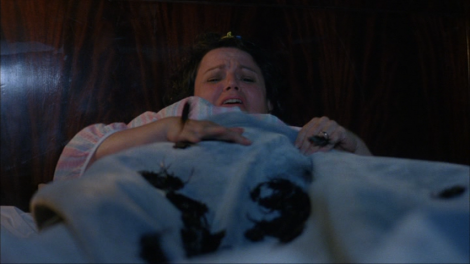 THE NEST isn’t a great film by any means, and it’s rather surprising that Shout! decided to release this on its’ own rather than as a double feature with another creature flick – it would have been great to see this paired with ISLAND CLAWS or even GNAW: FOOD OF THE GODS 2.  Still, it’s a fun, energetic time killer for anyone who enjoys cringing at the sight of a roach in a coffee cup, and that seems to be exactly the type of film Winkless set out to make.