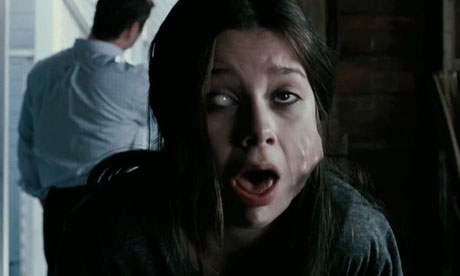 About twenty years from now, after numerous major film studios have traded off so many of their catalog titles to each other, the people that are now in their teens will have a nostalgia for the horror movies of their youth. Sure, solid films like CABIN IN THE WOODS and THE ORPHANAGE will still be lauded and admired on their own, but the vast chunk of them will be more likely to be sold as 8-film bundle packs, where you can have the top PG-13 horror films of the early 21st century beamed directory into the holotube in the back of your brain. The purchasers will have a great time, inviting similarly-aged friends over to relive the memories of watching the likes of DARKNESS FALLS, THE UNBORN, THE UNINVITED, THE PASSENGER, THE LAST EXORCISM, THE DEVIL INSIDE, and THE APPARITION. And then, after it’s all over, they’ll forget about the movies entirely and go back to working in the space mines, occasionally remembering some vague image from one of the movies but having no idea as to which one it was actually from.

THE POSSESSION, the new film produced by Sam Raimi and directed by Ole Bornedal, who helmed both the Danish mortuary thriller NIGHTWATCH and its’ American remake, would fit nicely into this collection –Raimi himself is no stranger to the PG-13 ghost story, less notably that he was the “name” attached to both THE MESSENGERS and 2005’s BOOGEYMAN than as the director of DRAG ME TO HELL, one of the few that stood out as being unique and genuinely entertaining. Sadly, THE POSSESSION is more in the former class, a fair, unremarkable horror film that pulls its’ punches but manages to be watchable due to some slumming talent.

Jeffrey Dean Morgan stars as a husband of two kids, currently separated from their mother (Kyra Sedgwick in a thankless role). During one of his weekends with custody, he and the kids stop off at a rummage sale where they buy an old wooden box with Hebrew inscriptions. We know this box is bad news thanks to a prologue where some kind of presence seems to attack an older woman trying to destroy it, coupled with seeing the woman at the garage sale, hidden away in a bedroom in traction, yelling her head off when she sees the girls. Soon enough, Em, the younger of the two played by Natasha Callis, is opening up the box and releasing the evil within which is soon possessing her and causing all sorts of stereotypically PG-13 horror shenanigans. 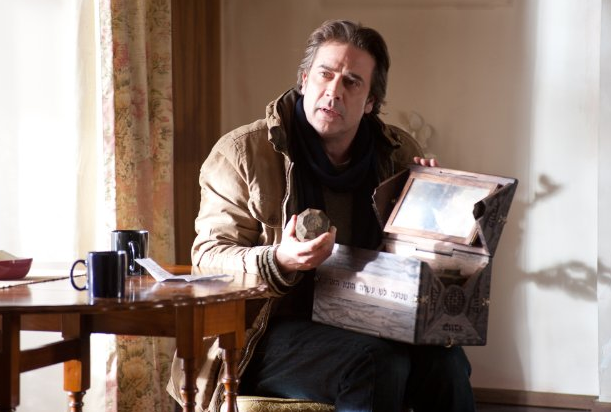 One common theme in horror films with younger leading roles is that the child actors are pretty much uniformly praised for playing “freaked out” and “menacing.” You can see it in the reviews for the likes of INSIDIOUS, ORPHAN, JOSHUA and just about any of the other recent movies in which children are meant to personify something very, very bad going on. THE POSSESSION is certainly no exception to that rule – Callis does a great job looking sinister, with her long hair flopping over one eye in the standard “this child has the devil in her” look we stole from Asian horror. When she starts talking to her imaginary friend that emerged incorporeally from the box, she even bears a striking resemblance to Jack Torrence talking to Tony. However, as an acting challenge, you’ve got to think that it’s not much of a stretch – kids love playing evil monsters, and the chance to do so and get paid for it has got to be a boon to most actors of any age, so it’s not that surprising that most child actors in horror roles are genuinely creepy.

That said, Em isn’t around for much of the chaos. After Em is bombarded by moths, apparently the only insect yet used for a stereotypical shock sequence, she starts acting very defensive of the box and attacks a classmate at school, causing it to be taken away from her. An unremarkable death sequence later and Dad starts actually trying to figure out what the box is all about, having for whatever reason never bothered to before, and discovers that it housed a dybbuk, a malicious spirit from Jewish mythology that is now trying to use his daughter to gain life.

If this sounds a little familiar, it’s because a dybbuk was also the source of the problem in 2009’s THE UNBORN, which I vaguely remembered only because Gary Oldman played a rabbi. As Oldman was not available, Dad has to drive five hours to New York City to find a rabbi that will perform the exorcism. (Now, I live in Skokie, Illinois, in which you can’t throw a bagel and schmear ten feet without hitting a Rabbi, but really? Five hours? Does he live in a town of anti-semites?) The old guard rejects him because they fear the dybbuk box, but he’s assisted by a “non-traditional” (he has an iPod) rabbi, played by Hasidic Raggae superstar Matisyahu (yes, seriously). 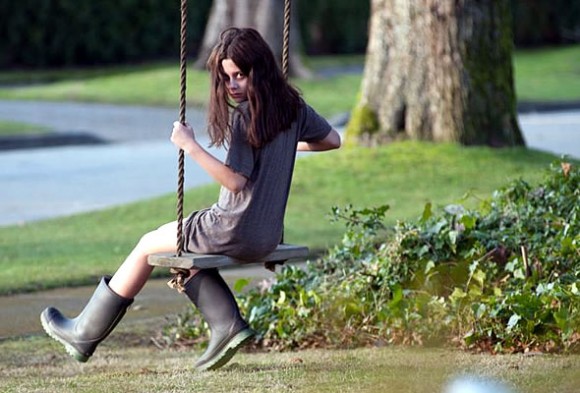 For most of its’ running time, THE POSSESSION is a perfectly serviceable film, giving the audience the occasional loud, shock moment of mildly weird imagery coupled with a sudden silence. Morgan’s performance helps elevate the film, as he gives his character more gravitas than you’d expect as a father just trying to do what’s best for everyone involved, himself included. It crashes down a little bit at the end, with the typical exorcism scene (this time, with Hebrew!) and you may start to realize that virtually nothing in the film has been explained to any degree – where did the dybbuk come from? How does it have power when it hasn’t been opened? If it’s looking for youth, why did it go after the old woman at the beginning? Why moths? Is Mom’s new boyfriend supposed to be sympathetic or not?

The result is a hollow shell of a possession flick, one that kills 90 minutes successfully but doesn’t do anything more. There’s an interesting premise and some good performances in THE POSSESSION, but none of them are utilized to any degree, resulting in a movie you’ll have virtually forgotten about by the time the end credits have finished rolling.