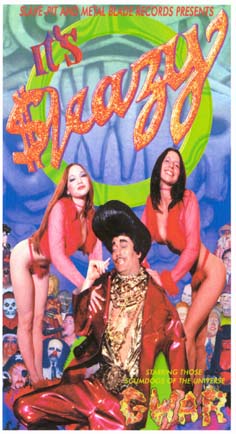 From 1993 until 2001 the heavy metal band GWAR released a series of outrageous straight-to-VHS films celebrating their complex mythology, while simultaneously skewering popular culture and reveling in gore. Also, sometimes there was music.

When I was but a naive teenager, I recall seeing these videos tucked secretively behind the counter at music stores and I regularly fantasized about what possible extreme content could possibly be contained in films like (the Grammy nominated!) PHALLUS IN WONDERLAND or SKULHEDFACE. Friends of mine would whisper about the totally outrageous GWAR stage shows which usually ended with the audiences covered in blood and semen. Of course, now it’s 2016 and a quick YouTube search can bring up all of the videos, plus countless hours of live GWAR footage. C’est la vie!

The (up to now) final video of this series was 2001’s IT’S SLEAZY, prominently featuring (storyline) GWAR manager Sleazy P. Martini as the host of a Jerry Springer-esque talk show, with a studio audience filled with classic characters from previous GWAR videos including CARDINAL SIN: THE INTERGALACTIC KLANSMAN, and FATHER BOHAB (THE BABY BOINKER). Most are startling creations of foam rubber and/or styrofoam that were — and are — the hallmarks of the GWAR stage-show, as well as GWAR themselves.

Directed by (GWAR co-founder) Hunter Jackson and the late Dave Brockie (Oderus Urungus), the hour long video has moments of hilarious nuttiness, the best being when “Marilyn Has-been” tells the band to “go back to art-school” before having all of his skin ripped off. Sweet! We also see the mutilation of Elvis Presley, a giant killer toilet, a transsexual who graphically slices off his own (fake) penis, and THE JAGERMONSTA, which is some sort of giant bunny thing. The talk show segments are inter-cut with fake commercials of incredible bad-taste, such as FULLFLO, the feminine hygiene product that is really just a full-sized, blood-covered sheep.

As you can imagine, it revels in the sort of “I’m so naughty” humor that would feel at home in some of the better Troma productions, though with its free-form, anything goes structure it naturally meanders a bit, particularly when it feels compelled to go back to its wisp of a plot (involving an ancient stone tablet and a former classmate of the band with testicles for a chin). A lot of the humor is puerile to the point of eye-rolling, but when it relies on the impressive puppet creations it’s pretty damn impressive. At just over an hour, it skirts against overstaying its welcome, but in the end it remains worth it for its messier, and more chaotic, moments. That said, I don’t think I’ll ever look at a crab the same way again. 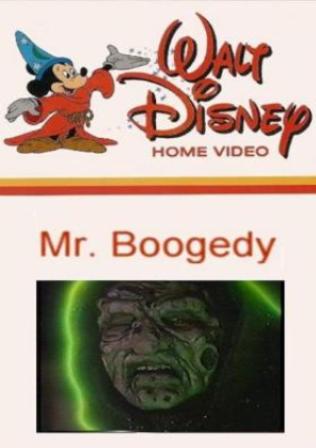 Boogedy Boogedy BOO! Many a child was (mildly) traumatized by this made-for-TV Disney spin on POLTERGEIST, which combines plenty of haunted house action with a surprisingly dark climax featuring the titular Boogedy, who looks a bit like Freddy Krueger’s green-tinted cousin. Watching it 30 years later, it’s certainly shorter than I remember (45 minutes!), but also a good deal weirder, especially the family’s nonplussed reaction to the rampant spookery around them.

Things kick off with the Davis family (led by gag-store owner Carleton, played by the always awesome Richard Masur) moving to their new house in Lucifer Falls, New England. Despite Dad’s enthusiasm, the rest of the Davis clan (which includes Mimi Kennedy, Kristy Swanson, David Faustino and that kid from ALF) are a bit more hesitant, especially since they arrive on a dark and stormy night and immediately run into the bizarre Mr. Witherspoon (John Astin!), who warns the family that the house is haunted. While Dad busies himself with his Groucho glasses and joy buzzers, the rest of the family spend the next few days exploring the massive house, with the daughter Jennifer (Swanson) being the first to run into BOOGEDY!

Jennifer, along with younger brothers Aurie and Corwin, seek out Witherspoon to explain the ghosts, and get the full story from an ancient pop-up book. Apparently, Mr. Boogedy was originally a nasty old pilgrim named William Hanover who sold his soul to the devil after being rejected by Marion, the only woman in the village who could stand him. The devil granted Hanover an enchanted cloak, and the dickhead kidnapped Marion’s child before accidentally blowing the three of them up when trying to cast a spell. Oh, and he’s called Boogedy because he used to shout “Boogedy boo!” at the pilgrim children 300 years ago.

After a few run-ins in with the ghosts of Marion and her kid, the Davis family eventually battle Boogedy and that’s when things get really goofy. Eventually they rid him of his cloak, and suck his protoplasm into the family vacuum cleaner. It even ends with a tease for a sequel, which — as BRIDE OF BOOGEDY — arrived a year later.

The 80s were a boom era for films about supernatural hi-jinx and, despite endless television airings on The Wonderful World Of Disney, MR. BOOGEDY holds up as a strange, fun relic of a time when a flailing Disney was throwing everything at the wall. While never treading near real horror, the twist of having the house be on a Pilgrim burial ground (as opposed to the classic Indian burial ground favored by POLTERGEIST and THE SHINING) and the eerie look of the film’s ghosts make for some effective pre-teen chills. Best of all is the cast, with Masur seemingly having a grand old time hamming it up. I might be viewing it through nostalgia-colored glasses, but it remains a lot of fun. 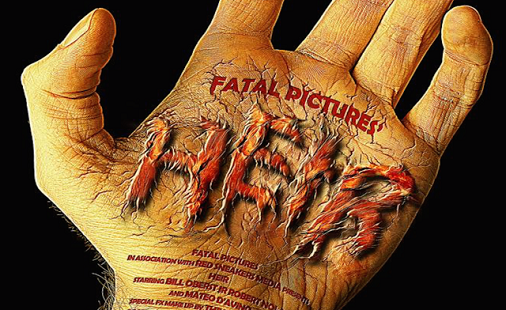 It’s so rare to come out of a horror short raving about the acting, but that’s exactly what I did after checking out Fatal Pictures’ previous film FAMILIAR a couple of years back. Robert Nolan’s tremendous lead performance in that film was a complete revelation, and when combined with the lashings of Cronenberg-ish body horror at the film’s core, it made for one of the slickest, and most accomplished, horror shorts I’ve seen in recent memory.

Now, thanks to a successful Kickstarter campaign, Nolan is back, and this time director Richard Powell and producer Zach Green have brought along indie horror heavyweight Bill Oberst Jr. to pair with him. I’m happy to report that the results are electric, and more proof that Fatal Pictures are one of the most startlingly inventive production companies in the world today. As before, they unflinchingly examine some of the darkest corners of modern life, with internal turmoil (painted wonderfully on the face of Nolan) becoming external in the form of twisted flesh.

At a mere fifteen minutes, I feel hesitant to give away much of the plot. Needless to say it examines one of the last true societal taboos with style and intelligence, helped along by some spectacular physical effects and Oberst Jr.’s typically reliable work. Much of its first half is uncomfortably realistic, so much so that when the goop and slime starts to come out it’s almost a relief to escape from that reality. Still, real-life keeps tearing away at the edges, and it’s likely that timid audiences may come out the other end as shaken as Nolan’s character.

Yes, it’s nearly impossible to watch the work without thinking of early Cronenberg, but there’s still plenty going on here that’s unique to the vision of Richard Powell. He has an eye for striking visuals, and — with some minor exceptions — incorporates the effects work beautifully. It took me a couple of viewings to truly appreciate the depth of accomplishment here, but if you get a chance to check out HEIR, don’t you dare pass it up. We’ll be hearing about the work from Fatal Pictures for years to come, and I — for one — can’t wait to see what they’ll do next…