It’s the weekend. It’s late. Let’s talk about some movies. 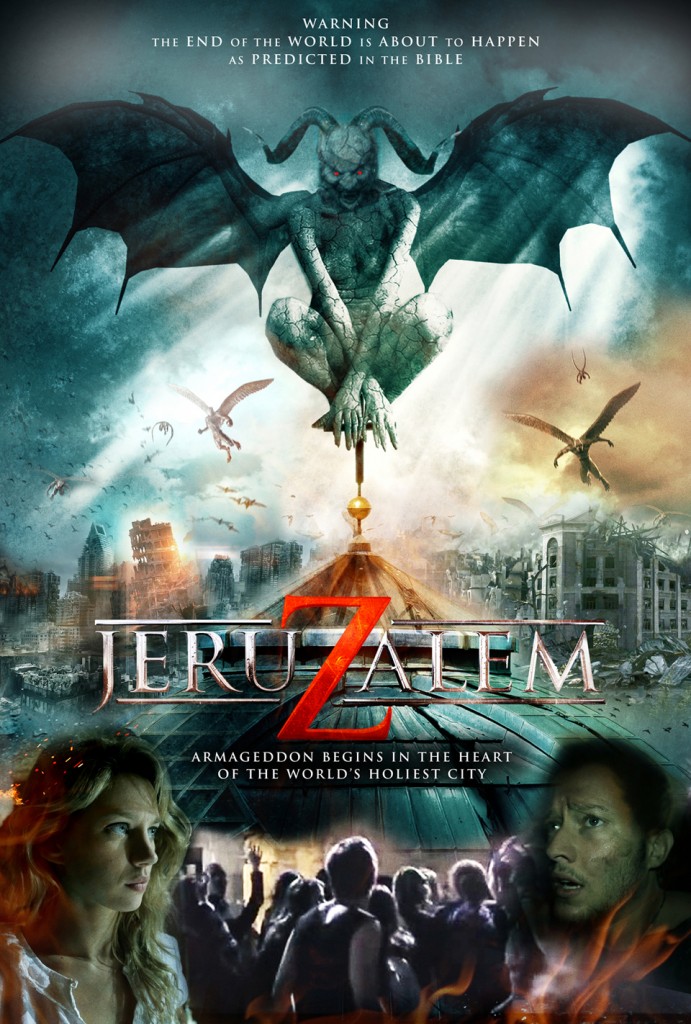 Recently, I was lucky enough to see an incredibly inventive, deliriously exciting film shot entirely in POV, which was full of inventive visuals and terrific set-pieces. It remains one of the most unique cinema experiences I’ve had in recent memory.

That film was Ilya Naishuller’s HARDCORE (now retitled – badly – HARDCORE HENRY) which I saw at the Toronto International Film Festival, and which took the found footage format to its absolute extreme. It’s awesome.

Anyway, I also recently saw another stab at the POV found footage genre in the Paz brother’s JERUZALEM, which trades in the ever-present handicam/cameraphone for a pair of neat-o Google glasses, and trades in the overstuffed zombie genre for some weird flying demons that look and act pretty much just like zombies. Yeah, it’s [REC] again, only this time in Israel!

The glasses belong to young, affluent Sarah (Danielle Jadelyn), who is attemping to get over the death of her beloved brother by taking a trip with her best friend Rachel (Yael Grobglas) to the most happening place on the Mediterranean coast: TEL AVIV! The pair meet up with young adventurer Kevin (Yon Tumarkin) who suggests the pair join him on a detour to Jerusalem. They’re having a heck of a time, until a biblical prophecy comes to pass and all hell breaks loose… LITERALLY! Soon things are exploding, winged creatures are attacking, and — get this — if you get bitten you turn into one of them! CRAZY!

Unable to escape the city, the group head underground and we’re treated to a lengthy sequence shot in nearly complete darkness with spooky noises and terrifying creatues surrounding these characters we maybe sorta give a shit about. Then there’s a LOT of screaming and a lot of running, and yeah… You know what this is all about.

I really shouldn’t be so flippant. It’s actually really well-made, and the crew were granted access to some lovely, rarely filmed parts of the city that give plenty of production value to what must have been an awfully low-budget. The creatures, generally seen in quick glimpses, are appropriately imposing, and mix some really great-looking makeup with brief, effective CG. The cast are terrific from top to bottom, and even manage to elicit some sympathy before things inevitably fall to pieces.

It’s just all so… usual. If you’re at all familiar with found footage films, you’ve seen all of this before in one interation or another; and likely more than once. Sure, there are some unique elements — particularly related to the expanded functionality of the glasses — but outside of a cute VR-based zombie killing game (and its callback) they are just different coats of paint on the same old zombie movie. I still find the frantic, running-for-your-life POV moments to be awfully effective, but once things move down to the mines and it becomes a cheap funhouse, it quickly runs out of steam. 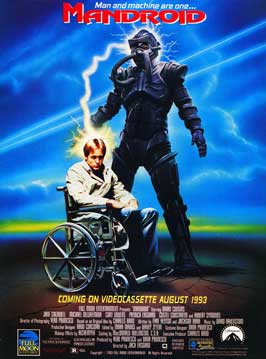 First thing’s first. See that cover? This movie does not feature a guy in a wheelchair who can turn into a giant robot to fight, like, aliens, or gangsters or other giant robots. That was sort-of the plot for mid-90s syndicated TV series M.A.N.T.I.S. (produced by Sam Raimi!), so if that sounds like something you might enjoy, go seek that out.

Oh, and if you want a part-man, part-robot with laser guns and tank treads called Mandroid, check out ELIMINATORS from 1986. This movie does not have that.

What MANDROID does have is a robot suit that can be controlled remotely through the power of VIRTUAL REALITY. It’s like one of those RC cars, except in this case it’s a doofy robot suit that’s been designed to punch cave walls to uncover special mushrooms that can cure cancer or something. MANDROID comes to us from FULL MOON PRODUCTIONS, which is clear because of the film’s odd, eastern european setting and straight-to-VHS sheen. There was a time in the mid-90s when it seemed like EVERY Full Moon movie was made in Romania — think SUBSPECIES — and this movie has a cinematographer named Vlad. I’m not saying he’s a vampire, but I’m also not NOT saying that.

Anyway, MANDROID plays out like the pilot of a particularly silly TV series, in that it’s 99% set-up and very, very little pay-off. There’s even a truly fuckin’ weird subplot where a guy gets turned invisible that exists just to set up a follow-up film (INVISIBLE: THE CHRONICLES OF BENJAMIN KNIGHT) that I didn’t know existed because they — for whatever reasons — decided not to call it MANDROID 2.

The droid itself is the brainchild of the kindly Dr. Karl Zimmer (Robert Symonds) and his partner, the obviously evil Drago (Curt Lowens). But when Zimmer attempts to sell the bot to the U.S., Drago gets very, very upset. Apparently he a) hates the U.S. and b) REALLY wants to use the Mandroid as a weapon. Poor guy. Meanwhile, a nerdy, gum-chewing American scientist (Brian Cousins) arrives to, uh, I think examine the robot or something. He’s teamed with a CIA agent (Patrik Ersgård, sporting the worst American accent I’ve ever heard) who is the one completing the deal. Oh, and also Dr. Zimmer has an attractive daughter because of course he does.

So, Drago goes nuts and tries to steal the suit, but in the process gets splashed with “Superconn”, which apparently makes you look like Ivan Ooze from the MIGHTY MORPHIN’ POWER RANGERS movie. He gets himself a mute lackey to do his dirty work (and fashion him a stylish metal mask) and soon he’s able to get the MANDROID and fashion a new control helmet that can be used from long distances. Eventually everyone fights each other, with most of the characters you would expect to die dying and the American scientist getting put into a wheelchair. Also, Drago dies. Except he doesn’t, because there’s a final scene where he gropes some tits. FULL MOON VIDEO!

The robot itself — all black tubes and ROBOCOP noises — doesn’t really get much to do, despite apparently being nigh-invulnerable and having super-strength. It mostly just stands there while people shoot at (or around) it, and they didn’t even give the MANDROID a rocket punch or laser sword so what’s even the point?

It would all be servicable superhero kids fare, except for some reason they decided to stick in a bunch of violence (and a smattering of nudity) so that it ended up with an R-rating. While it mostly just involves people being shot in the chest six or seven times, it’s still a bit strange considering how tame the rest of the movie is.

I know it’s hard to believe a movie called MANDROID could be bad, but while it aims for cheesy fun, it ends up being a ponderous slog and focuses way too much time on setting up — and killing off —  a group of uninteresting characters. A real waste of time, and the robot stinks. 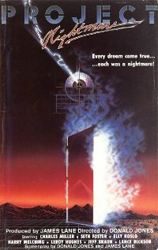 Two men (Charles Miller and Seth Foster) are attacked by an unknown force while camping and find themselved roaming a barren desert, seemingly unable to find any signs of civilization aside from a remote cabin inhabited by a kind, though oddly distant, woman. After leaving the cabin, the pair find themselves pursued by some sort of otherworldy force, represented by strange colored barriers in the sky. While searching for civilization (or communication) they encounter a man driving a car who dies rather suddenly, and they return to the cabin, which has been overtaken by the strange force. Rescuing the woman, the three return to the desert, where one finds — and flies — the dead man’s abandoned plane. After landing, he finds a small pyramid in the desert which leads to some sort of underground lab.. and that’s when things start to get strange.

PROJECT NIGHTMARE is a slow, surreal gem which manages to remain pleasingly mysterious to its end despite some stiff performances and cheapo visuals. While often credited as being from 1987 (including on the IMDB), it was actually lensed in 1978 — made obvious by the fashion choices — and might very well have found a cult audience on VHS if marketed as trippy, cerebral sci-fi instead of straight horror.

Which isn’t to say it’s flawless. The special effects may be trippy, but you couldn’t blame a post-STAR WARS audience for scoffing a bit watching the lead characters running away from colored lights. The locations are appropriately remote, but quickly all start to look the same, and it’s only the eventual move to the lab that provides much visual interest.

On top of that, this is an awfully slow-moving movie. For the first half you’re likely to be as confused as the characters, and it takes a bit of patience to get on director/writer Donald M. Jones’ wavelength. Even then, the Twilight Zone-ish reveal (combined with a giant floating head) will probably create as many questions as answer, but who cares? This is fun, inventive stuff that kept me intrigued till its final moments.

For those interested in checking out PROJECT NIGHTMARE (originally known as TOUCHSTONE), here’s some good news! The director Donald M. Jones has put the entire film onto YouTube, and I contacted him to get a little insight into its making:

Project: Nightmare (originally titled “Touchstone”) was my baptism in feature filmmaking. It was absolutely insane of me to pick this story as the subject of my first feature since it involved rather complicated science-fiction ideas and worse: special effects! I was fascinated with the idea of people finding themselves completely isolated in a landscape that has now become alien due to the unexpected intrusion of an unknown pursuing force. Producer James C. Lane helped to flesh out the story and bring it into final script form.

We had no initial financial backing for the film. Instead we obtained a bank loan for $5,000 to get the film into production. We were able to get a 50% deferred deal from a camera rental place in Hollywood. In addition, we saved more money by filming only on weekends, where one day’s equipment rental would yield two days’ worth of filming. We decided to shoot the film in 35mm (!) Everyone (actors and our tiny crew) worked for deferred salary (in essence, for free). The film was photographed in the mountains, foothills and deserts of southern California. The interiors of Project Touchstone were filmed in sets we constructed in a little studio in Pomona, California.

The film was finally completed in June, 1979, at a cost of approximately $30,000. The entire amount (except for about $4,000 from a few investors) was financed by Jim and myself.

Now the real fun began: trying to sell the damn thing. In those days, we didn’t hand out videocassettes. Instead, we tramped around Hollywood and Burbank, hefting all sixteen reels – eight picture and eight sound – of the tape-spliced workprint (we couldn’t afford a proper answer print) and met with rejection after rejection (at one point being told the film was unreleasable). We didn’t sign a distribution deal for it until 1983, when we signed with Emperor Productions for a theatrical release in Great Britain. It is my understanding the film was released there as “Brain Games”. In 1986, we finally signed a video release deal with Academy Entertainment to handle all English-speaking countries.

You asked about our influences. Jim and I were college buddies in the early-mid seventies and were both completely obsessed by the films of Stanley Kubrick, particularly “A Clockwork Orange” and “2001”. Besides all of the silly 8mm and super 8mm flicks I’d made as a kid, my own immersion into film as a serious thing really began with the Kubrick films, which Jim and I drove countless miles to view in theaters over and over again (remember – there weren’t VHS tapes in those days).