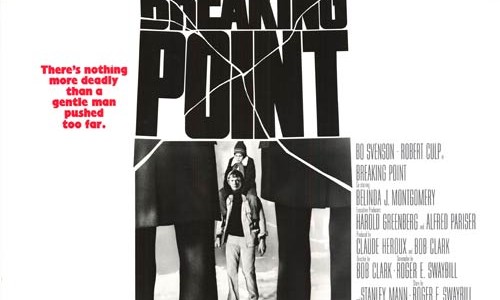 1976’s BREAKING POINT falls within the Bob Clark filmography during the period after BLACK CHRISTMAS and before PORKY’S.  BREAKING POINT can be loosely considered as one of those urban vigilante thrillers that were so popular in the mid- to late-1970s, exemplified by DEATH WISH and the like. In the tradition of those cheaper action titles, BREAKING POINT is rather crude and choppy. I can’t find much online about the history behind this movie, but even though it was distributed by 20th Century Fox, it feels like it was made on the quick and on the cheap, most likely to capitalize on the popularity of the genre.

You wouldn’t recognize anyone in BREAKING POINT except Robert Culp, as a frustrated and rather ineffectual cop, and Bo Svenson as the lead character, a karate instructor who interrupts a violent crime, feels compelled to report it to the police, and is then targeted by the mob. He’s pretty dour and humorless in this movie, but Svenson is a really underrated presence in action movies. He’s a humongous Swede, looking not unlike a super-sized Steve McQueen, who took over the role of Buford Pusser from Joe Don Baker in the sequel to WALKING TALL (and its eventual TV series treatment), and played in a ton of B-list action movies. Naturally, he’s a favorite of Quentin Tarantino, who cast him in KILL BILL and INGLOURIOUS BASTERDS.

As I said, Svenson’s character in BREAKING POINT, Mike McBain — that name is SO 1970s — is a fairly dour guy. He seems warm enough to his wife and stepson, to his assistant at his dojo, and even to the ex-husband who’s still in the picture, but when any of them press him as to why he seems so dead-set on endangering them all by testifying against the mob enforcers he identified, he barks out in anger that it’s something he has to do, and that’s that. Eventually, the mobsters, who have major real-estate deals in development, become weirdly obsessed with making McBain pay for his interference, and begin a ridiculously over-zealous campaign of revenge.

They set the ex-husband on fire, shoot another friend to death, and stalk McBain’s assistant in horror-movie masks, in a creepy scene drawing upon Clark’s experience in horror flicks. (Unfortunately, this scene culminates in the kind of sexual assault that was disturbingly common in movies of this type.) Even relocating his family under witness protection can’t keep these thugs away from his loved ones, so McBain eventually has to get on his shit-kicking boots.

That’s an hour into the movie, but it’s well worth waiting for, if you like this sort of thing.  For starters, these bad guys are no match for Bo Svenson. He’s well over six feet tall, and the size of a bookcase – one in which all the books are Sonny Liston autobiographies. By contrast, the villains are so non-descript that I didn’t even notice that the soft-spoken “don” was supposed to be stereotypically Italian until the movie was half over.  And here’s how his henchmen look:

It hardly seems fair. But let’s face it, we’ve seen plenty of movies where the puny nerds triumph over the dumb jock. Let’s not pretend that none of us secretly enjoy seeing annoying little pricks get stuffed into the locker.

And that’s exactly the kind of grace with which McBain goes about his mob-stomping rampage. After clubbing one thug to death in a bathroom, he lifts the guy up by his pants, in the most titanic cinematic wedgie I may have ever seen, and dumps the corpse on the toilet. Then, to give the jerk that much extra ignobility in death, he pantses the corpse and drapes his lifeless hand over his lifeless crotch.

The final showdown surpasses that momentous confrontation with even more lumbering force. In a brief setpiece that erases all of the similarities you may have been trying to draw between Bo Svenson and Woody Allen, McBain takes out one henchman by using a massive block of timber like a javelin.

But it gets better.

Instead of shooting it out with the main villain, McBain comes at him with a bulldozer, driving straight into the guy’s office. Not even the guy’s pet lizard (a ‘70s villain shorthand) is spared. McBain drives the house, with the guy in it, over a ridge and into a ravine. Where it explodes. Duh. He watches the debris burn. And the movie’s over.

I’m not arguing for BREAKING POINT as a lost classic, or even a must-see. It’s not.  It’s a frequently dull, often sloppy, and absolutely generic movie that doesn’t rate higher than serviceable until its final third, where Bo Svenson finally goes apeshit. But that part is really fun to watch, and beyond that, it’s profoundly interesting to me that the same director who made this movie also made PORKY’S, A CHRISTMAS STORY, BABY GENIUSES, and something called KARATE DOG. That’s the kind of bizarre versatility that I can totally get behind.