He’s lost. I am not sure where the abduction took place but I know when. It was in 1988, right after he wrapped THEY LIVE. There were reported sightings: IN THE MOUTH OF MADNESS, a moment or two in VAMPIRES, but he remains lost, and we need him back. In an age of remakes and safe PG-13 shit, we need John Carpenter back. I thought we would find him in THE WARD, for about 20 minutes I found him, and then he disappeared in a cloud of clichés and bad shots.

THE WARD stars Amber Heard as Kristen, a young woman who has been institutionalized and is being haunted by a ghost.  Things wouldn’t be so bad if the ghost made nice and kept to itself, but as they do in flicks, it decides to start picking off the other patients in the ward one by one. 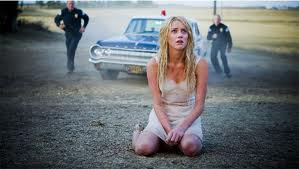 There are several problems with this film. They range from the ghost becoming less scary as the film progresses to empty chases in dark hallways to Carpenter trying to film in a style that is glossy and slick instead of gritty and tough. The most frustrating thing though is that THE WARD is not well written, it has more clichés than dime store detective novel.  One reason is the ghost just isn’t scary. If you know its Old Man Johnson behind the mask, the mask doesn’t do shit, unless Old Man Johnson is a sick fuck to begin with, in which case you better run. Carpenter thrives in the horror genre when there are subtleties to the horror. This is loud, bold, but as far south from shocking as can get.

So what works in the film? Mark Kilian’s score is fantastic; it embraces Carpenters 80’s soundtracks but modernizes it a bit. Amber Heard is good; In fact, I have yet to see her in a role she didn’t kick some ass in. She has toughness to her. There are scenes in THE WARD where you feel like you are watching Sarah Conner escape Pescadores Mental Institution in TERMINATOR 2. She is a crafty actor that has a real sense of cool to her and I am really curious to see where she goes. It’s not a stretch to see her as an action star. Tough or not however, she’s in a bad film here.

This is one of the most confusing careers in Hollywood. Here is a man with incredible talent who has made some iconic films. Films that have inspired some of the directors working today, but he hasn’t made a good film in two decades. It sucks that I have to write that; if there is one director I want to see a film from its John Carpenter. This bastard isn’t giving up on him; I’ll continue to support him until his last film but come on Mr. Carpenter, HIT ME! Seclude yourself, go without sleep for a few days, drop some acid, do what it takes to unlock the 80’s Carpenter. At the very least don’t settle when it comes to a script. Fuck, I need to go watch THE THING to get the taste of THE WARD out of my mouth.